Meeting the Asian American and Pacific Islander Community of Cleveland

February 18, 2015 at 9:46 AM ET by Michael Byun
Twitter Facebook Email
Summary:
The White House Initiative on Asian Americans and Pacific Islanders (WHIAAPI) traveled to Cleveland to hold a community listening session at the end of January. 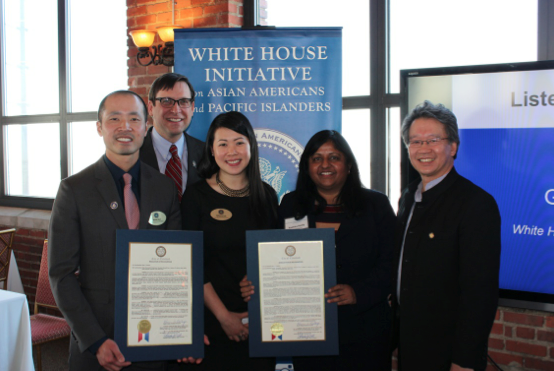 According to the U.S. Census Bureau, Asian Americans and Pacific Islanders (AAPIs) represent around 5.5% of Ohio’s population. Furthermore, AAPIs are one of the state’s fastest-growing demographic groups, having grown by 40 percent between 2000 and 2009.

As part of the White House Initiative on Asian Americans and Pacific Islanders (WHIAAPI)’s regional engagement efforts, particularly in cities with large and emerging AAPI communities, WHIAAPI held a Cleveland AAPI Community Listening Session on January 28, 2015. The Listening Session was held at the Ariel International Center in downtown Cleveland and drew nearly 100 community leaders from across business, nonprofit, and public sectors.

Federal representatives and community members then participated in break-out sessions to dive deeper into the issues of housing, education, immigration, labor and workers’ rights, health and human services, social security, and business. We greatly valued the perspectives of the community members and worked together to brainstorm recommendations on how the federal government can address key challenges. In the upcoming months and as a follow-up to the Listening Session, then White House Initiative on AAPIs looks to provide tailored technical assistance and trainings to the Cleveland community. We look forward to continuing our collaboration with Cleveland as we work to open the federal government’s doors to all AAPIs.

Michael Byun is a member of the President’s Advisory Commission on Asian Americans and Pacific Islanders.