Ed. note: This is cross-posted on the U.S. Department of Education's blog. See the original post here. 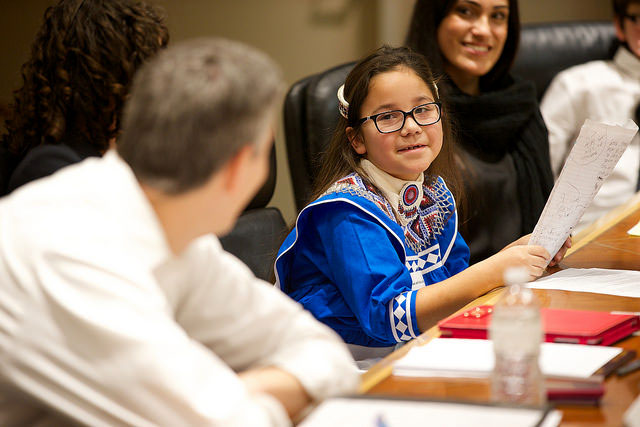 During the session, students discussed the importance of school culture. (U.S. Department of Education)

While many students face challenges when it comes to growing up and pursuing academic success, Native American and Alaskan Native youths are more likely than most of their peers to experience poverty and trauma, and to drop out of high school. Their school environment has a significant role in their development.

This is just one of the reasons why ED recently invited 15 young Native Americans to attend a Student Voices Session with Secretary Duncan.

This session was also a capstone to ED’s first-ever School Environment Listening Tour, a nine-city tour in seven states designed to identify the impact of school environment on young Native Americans.

During the session here at ED, the students expressed their great need for cultural and personal support.

“When native students have a space for cultural continuity in an educational setting, they are tremendously more successful,” commented Laree, a Lakota and Oglala undergraduate student from Wisconsin.

Blue and Kele, siblings from Oklahoma, are members of the Cherokee Nation and of Osage and Choctaw descent. They stressed the significance of their participation in Operation Eagle, a cultural and community group for native youths. Despite the existence of programs like this, however, they highlighted the fact that education about their culture needs to extend beyond their native community.

Blue recalled from one community event that, “volunteers came in wearing headdresses and paint on their faces … one kid had a Halloween costume of a native American. … They need to teach the kids that not everyone has a headdress; you have to earn everything … I just think it would be better to have them learn.”

Autumn, a high school student from the Pokagan Band of Potawatomi Indians, described a similar experience. Her high school mascot is the chieftain – an offensive Native American caricature – and the derogatory term “wahoo” is used for the yearbook and school dances. While these harmful images had caused many of her native friends to lose interest in school or drop out, Autumn said that she couldn’t really be mad. “It’s not [non-native students’] fault – they’ve been programmed to think we are savages by the history they’re taught.” Autumn agreed that a more inclusive history should be taught to all students. 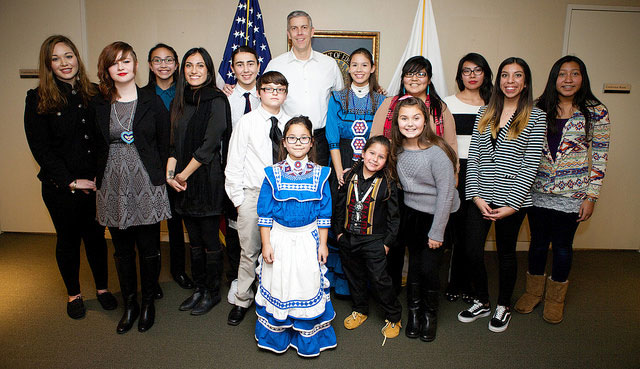 This Student Voices session was a capstone to ED’s first-ever School Environment Listening Tour, a nine-city tour in seven states designed to identify the impact of school environment on young Native Americans. (U.S. Department of Education)

When Secretary Duncan asked the students about how to increase college access and make learning relevant for Native American and Alaskan Native youths, they opened up with recommendations that included cultural programs, tutors and career counselors, more accurate history curricula, and increased college affordability. There was consensus among the students that creating a supportive school culture should start with principals and teachers modeling culturally sensitive behaviors.

Referring to the need for recognition of Native culture within schools, Benton, of the Jicarilla Apache tribe, the youngest of the group at only six years old, concluded, “It matters, my tribe is important.”

This session was a part of the ongoing “Student Voices” series at the Department through which students engage with senior staff members to help develop recommendations on current and future education programs and policies.

Samuel Ryan is a Special Assistant and Youth Liaison in the Office of Communications and Outreach at the U.S. Department of Education.