My Brother's Keeper: A Year Later

February 27, 2015 at 2:53 PM ET by Broderick Johnson
Twitter Facebook Email
Summary:
In the 12 months since President Obama launched the "My Brother's Keeper" initiative, we've seen a tremendous response from people and organizations at all levels that are answering the President's call to action.

"Helping more of our young people stay on track. Providing the support they need to think more broadly about their future. Building on what works, when it works, in those critical life-changing moments."

That's how President Obama explained the My Brother's Keeper initiative a year ago when it first launched. And in the 12 months since, we've seen a tremendous response from people and organizations at all levels that are answering the President's call to action. 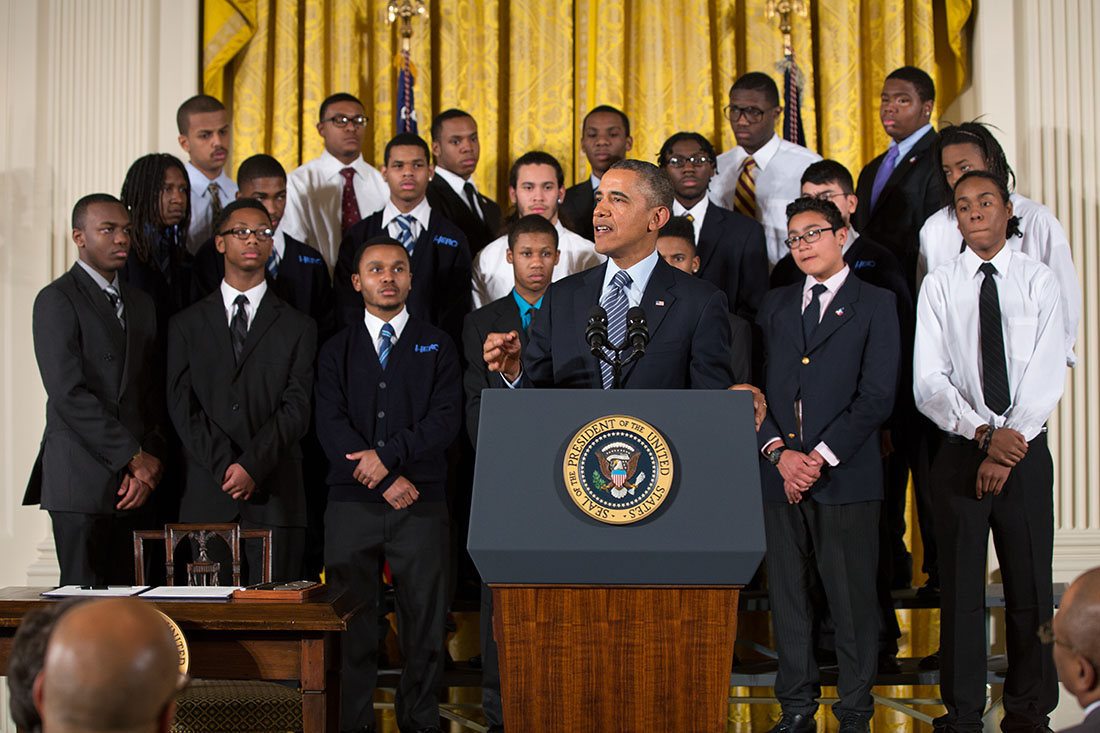 President Barack Obama delivers remarks at an event to highlight "My Brother's Keeper," an initiative to expand opportunity for young men and boys of color, in the East Room of the White House, Feb. 27, 2014. (Official White House Photo by Pete Souza)

President Obama established My Brother's Keeper, or MBK, to help close the opportunity gaps faced by too many young people across our country, and by boys and young men of color in particular. At the initiative's launch, he called for government, businesses, nonprofits, local education agencies, and individuals to step up and do their part to ensure all of our nation's youth have the tools they need to succeed.

We’re celebrating MBK’s first anniversary with a day focused on the young people and communities at the heart of this program. First, we’re sharing a very special StoryCorps interview between President Obama and Noah McQueen, a D.C.-area high school student and one of our White House mentees. In the interview that aired this morning on NPR, the President and Noah talked candidly with each other about overcoming tough circumstances, rebounding from setbacks, and what it takes to have a successful future.

If you didn’t get a chance to listen this morning, listen to the powerful interview here — and make sure to pass it on. I'll join the President, Noah, Transportation Secretary Anthony Foxx, and the other White House mentees for lunch today to catch up with them and to mark the anniversary.

Outside of Washington, the cities of New York and Los Angeles — both participants in the My Brother’s Keeper Community Challenge — will host Local Action Summits today, bringing together community leaders and youth to set goals and develop plans to make sure all youth in their communities can achieve their dreams.

And next week, we’ll release a report from the My Brother’s Keeper Task Force that details the progress we’ve made in the first year of the initiative. The report will provide an in-depth look at state and local place-based engagement, private-sector action, and efforts made by the federal government to better shape public policy. You'll read about growing efforts across the nation to provide optimism and opportunity for all our young people. And you’ll read examples of how communities, businesses, foundations, and social enterprises are investing in what works. 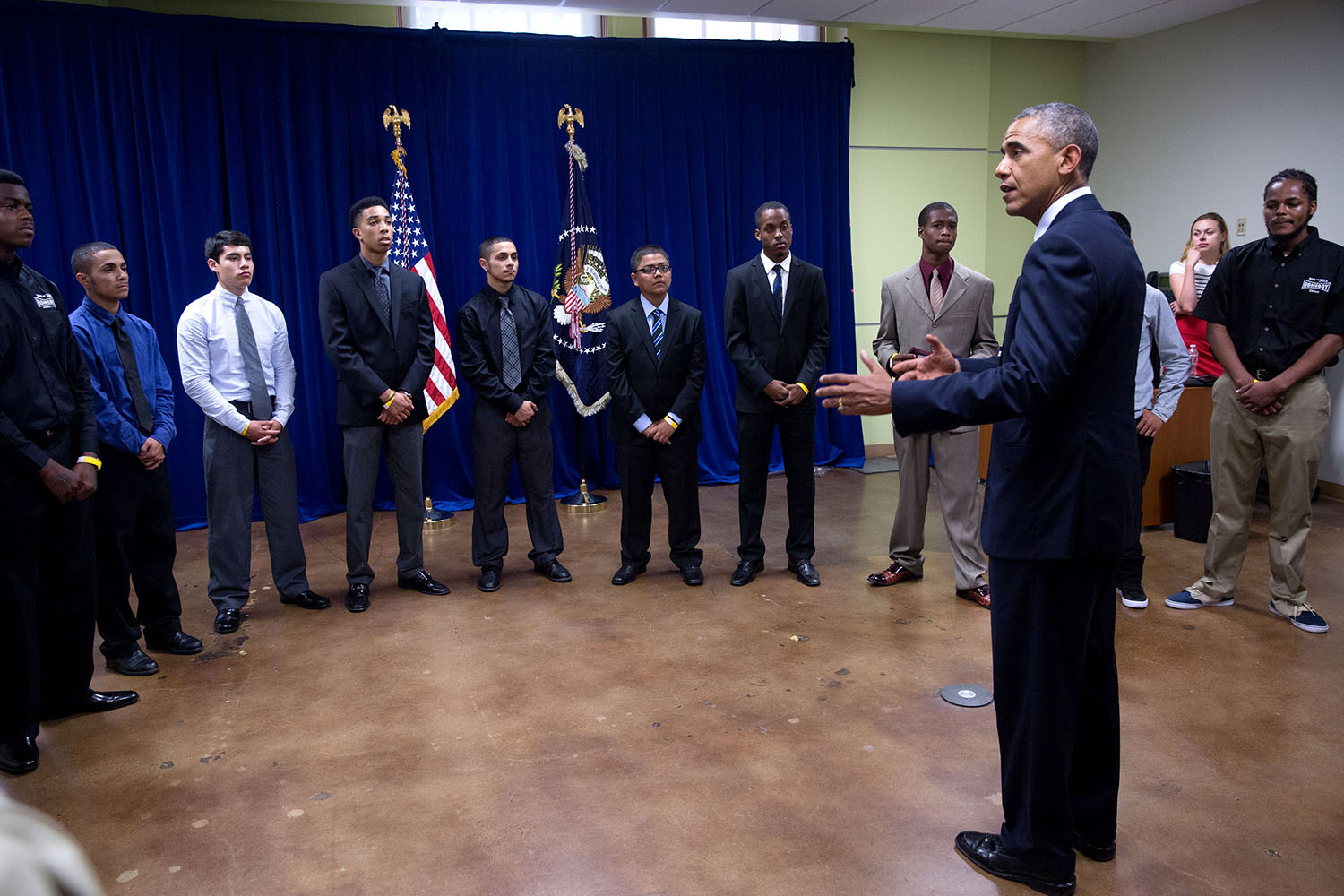 What the President understood when he launched MBK is that America will best compete and succeed when all of its young people are “on the playing field.” But when so many of our boys and young men of color and other youth grow up in poverty, drop out of school, can't find meaningful work, or fall into the criminal justice system, our nation suffers.

More than 60 superintendents of our country's largest urban school districts have pledged to develop new strategies to help meet the objectives of MBK. And nearly 200 mayors, tribal leaders, and county executives — from 43 states and Washington, D.C. — have accepted the MBK Community Challenge and committed to improve life outcomes for young people at the local level.

It's been an exceptional first year, but the best part is that it's just the beginning. We look forward to continuing to build hope and opportunity across America through MBK. 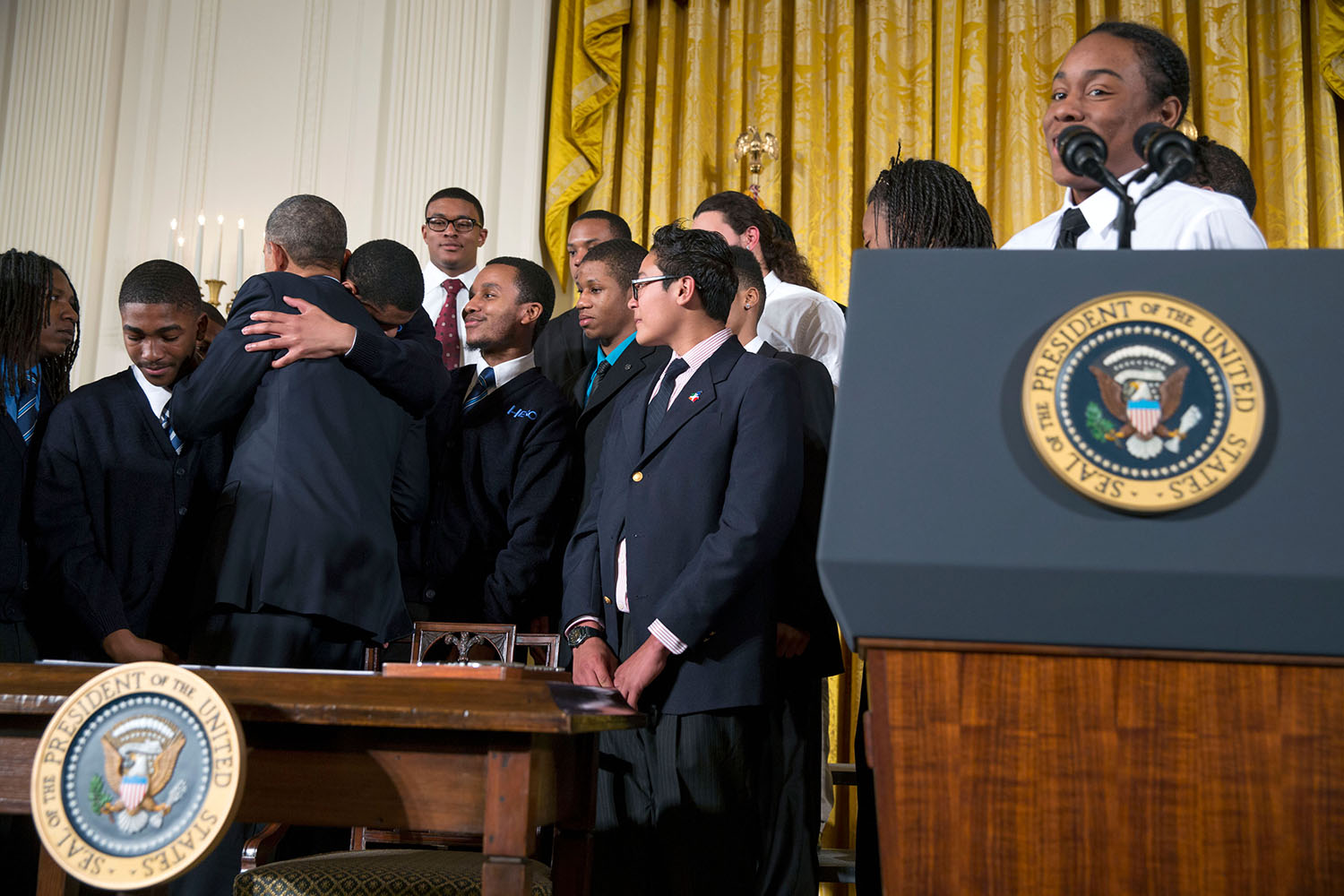 President Barack Obama hugs a participant after signing a Presidential Memorandum establishing the My Brother's Keeper Task Force, during an event to highlight "My Brother's Keeper," an initiative to expand opportunity for young men and boys of color, in the East Room of the White House, Feb. 27, 2014. (Official White House Photo by Pete Souza)