Second Estimate of GDP for the Fourth Quarter of 2014

Today’s estimate of fourth-quarter economic growth affirms the strong underlying trend of the largest and most persistent components of output, while reflecting downward revisions to more volatile sectors. The combination of personal consumption and business fixed investment—known as private domestic final purchases—grew at a somewhat faster pace than in the third quarter, indicating the same positive trend. Meanwhile, the more volatile and transitory factors that boosted growth in the third quarter subtracted from it in the fourth. Overall, today’s report is consistent with a wide range of indicators showing further labor market strengthening, increasing domestic energy security, continued low health cost growth, and resiliency in the face of slower growth in the global economy. The President’s approach to middle-class economics would build on this growth while helping to ensure that our recovery is widely shared with all American families.

1. Real gross domestic product (GDP) grew 2.2 percent at an annual rate in the fourth quarter of 2014, according to the second estimate from the Bureau of Economic Analysis. The report reflects especially strong consumption growth, an upward revision to business fixed investment, and continued residential investment increases. At the same time, the large third-quarter increase in Federal defense spending reversed, and inventory investment was revised down (see point 2). Overall, real GDP has risen 2.4 percent versus the fourth quarter of 2013. 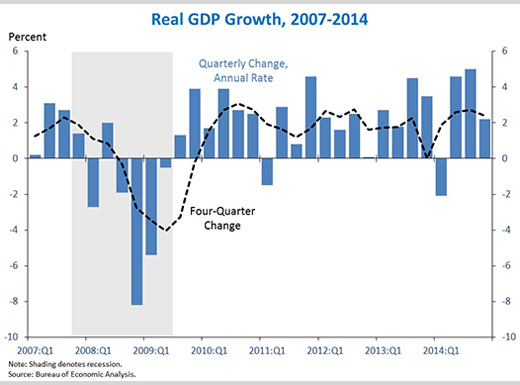 2. Fourth-quarter real GDP growth was revised down 0.4 percentage point from the advance estimate released in January. The entire downward revision can be more than accounted for by lower inventory investment than had been previously estimated, with revisions accounting for a 0.7 percent point downward revision in quarterly growth. At the same time, business fixed investment, a more stable indicator, was revised up, adding an additional 0.4 percentage point to fourth-quarter growth. Other revisions were largely neutral on balance, including a small downward revision to net exports and a small upward revision to State and local government purchases.

3. Real personal consumption expenditures, which constitute more than two thirds of GDP, grew 4.2 percent at an annual rate in the fourth quarter — matching the fastest quarter in the recovery. Consumption growth continues to trend upward as consumers’ economic optimism remains near post-recession highs. One reason that consumption has further scope to rise is that households spend less of their incomes servicing debts than they have in more than three decades – despite the substantial run-up in household debt that predated the financial crisis. Lower household leverage reflects both lower outstanding debt levels and lower interest rates, leaving Americans with more room to consume and invest, strengthening the overall recovery. Although households have substantially deleveraged on an aggregate basis, many households still have yet to participate fully in the recovery, and we have more work to do to boost incomes for middle-class families.

4. CEA’s research shows that real private domestic final purchases (PDFP) is a better indicator of the underlying trend in the economy than the more volatile GDP. Real GDP, like many indicators, can be volatile from quarter-to-quarter for purely transitory reasons related to fluctuations or measurement issues that provide little information about the underlying state of the economy. In the 2015 Economic Report of the President, CEA analyzed a range of indicators to find which one was the best predictor of one-quarter-ahead GDP, a way of gauging which component of GDP was the most inertial or had the highest level of signal about the economy relative to noise. The best predictor, measured by the R2, a statistical concept that captures how much of the future variation is explained by the variable, turns out to be PDFP.

5. Real private domestic final purchases (PDFP) — the sum of consumption and fixed investment — rose 4.3 percent at an annual rate in the fourth quarter, reflecting a 0.4 percentage point upward revision. Although overall GDP growth slowed from the third quarter to the fourth, PDFP growth actually increased slightly, by 0.2 percentage point. This is because the entire fourth-quarter deceleration in real GDP can be attributed to two of these volatile categories, net exports and government spending — two categories that boosted real GDP in the third quarter. As such, the underlying trends driving the economy’s performance were quite similar in the third and fourth quarters. Over the past four quarters, PDFP has risen 3.3 percent, a faster pace than real GDP.