March 6, 2015 at 9:30 AM ET by Jason Furman
Twitter Facebook Email
Summary:
With another strong employment report released this morning, we have now seen twelve straight months of private-sector job gains above 200,000 -- the first time that has happened since 1977.

With another strong employment report, we have now seen twelve straight months of private-sector job gains above 200,000 -- the first time that has happened since 1977. Moreover, 2014 was the best year for job growth since the late 1990s and 2015 has continued at this pace. But additional steps are needed to continue strengthening wages for the middle class. As outlined in the 2015 Economic Report of the President, the optimal environment for sustained middle-class income growth features policies that grow productivity, promote a more equitable distribution of income, and support labor force participation. The President’s focus on middle-class economics is designed with those goals in mind.

1. The private sector has added 12.0 million jobs over 60 straight months of job growth, extending the longest streak on record. Today we learned that total nonfarm payroll employment rose by 295,000 in February, largely due to a 288,000 increase in private-sector employment. Although private-sector job gains in December and January were revised down, the private employment gains over the past twelve months total 3.2 million—the largest 12-month increase since 1998. 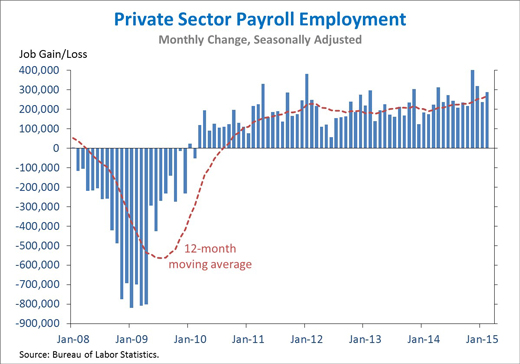 2. Despite a string of recent snowstorms in the northeast—and Boston’s snowiest month on record—winter weather appeared to have little impact on the headline figures in today’s report. While overall job growth was robust and the national average workweek was steady, the details of the employment report do offer some insight into the effect of weather on economic activity. In particular, 1.4 million nonagricultural workers that usually work full-time reported working part-time (fewer than 35 hours per week) due to bad weather, likely reflecting a February 8-10 snowstorm that coincided with the survey reference week. Another 328,000 nonagricultural workers reported missing work for the entire survey reference week due to bad weather. Both these figures are elevated from January, but below what was seen last February, when substantial snowfall stretched into parts of the southern United States that may be less accustomed to winter conditions. Even by Boston’s standards, this year’s winter undoubtedly qualifies as severe, creating hardship for many families and likely affecting other economic data such as vehicle sales and first-quarter GDP. 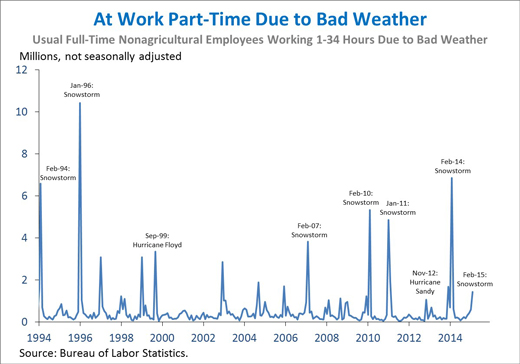 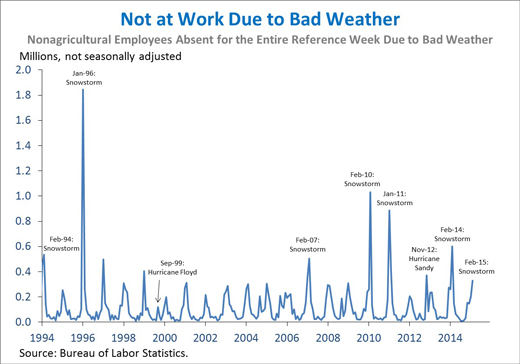 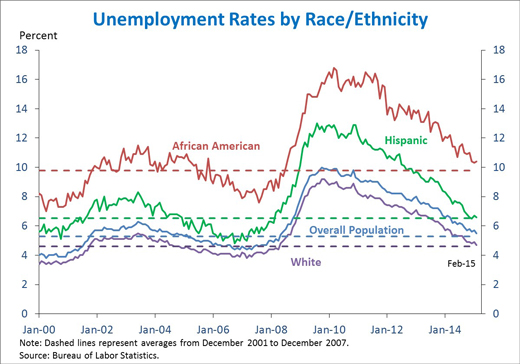 4. The last time the private sector added more than 12 million jobs over five years was April 1996 to March 2001. There are some notable differences between the current stretch of job gains and the one from 1996 to 2001. In particular, the manufacturing sector has added 877,000 jobs over the last five years, while it lost 255,000 jobs during the 1996-2001 period. Moreover, the private-sector job gains during the 1996-2001 period coincided with the addition of more than 1.5 million State and local government positions; in contrast, over the last five years, State and local government employment has on net fallen by 423,000 jobs. The two periods did, however, exhibit remarkably similar job growth in sectors like health care and social assistance, retail trade, and transportation and warehousing. Finally, it is worth noting that the two periods took place at different stages of the business cycle—in 1996, the economy was well into a period of sustained expansion, but in 2010, it was just starting to recover from the worst crisis since the Great Depression. That is why despite the progress that has been made, the President believes more must still be done to capitalize on the recovery and strengthen the labor market. 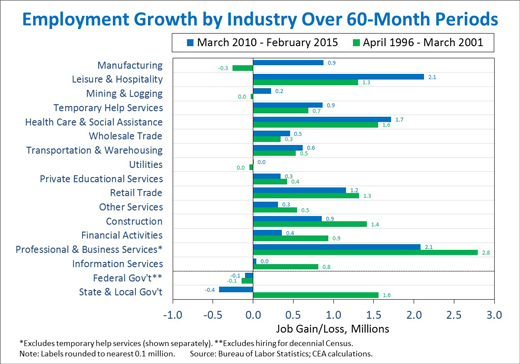 5. Job growth in a number of industries diverged from recent trends in February. Looking over the 60-month streak of private-sector job growth, February was one of the top ten strongest months for leisure and hospitality (+66,000), private educational services (+21,000), and professional and business services (+59,000, excluding temporary help services). However, February was a weak month for temporary help services (-8,000) and for mining and logging (-8,000). Manufacturing gained 8,000 jobs last month, and the sector has gained 877,000 jobs since February 2010. Across the 17 industries shown below, the correlation between the most recent one-month percent change and the average percent change over the last twelve months ticked up to 0.13, remaining near the lowest in over two years. This reflects the high number of industries that saw unusually divergent performances in January and February. 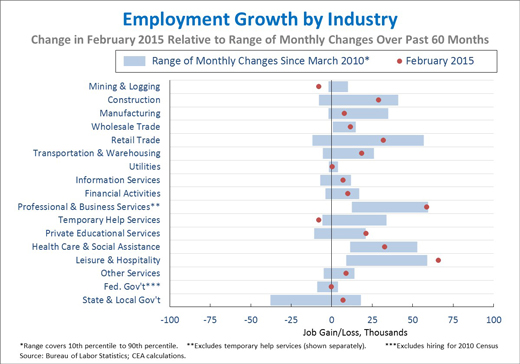