My Brother’s Keeper: A Year of Progress

March 6, 2015 at 1:34 PM ET by Arne Duncan
Twitter Facebook Email
Summary:
Great efforts are underway in communities across the country – but our young people still face great challenges. To truly change the face of opportunity in this country – to truly make the bounty of America available to the many, and not just the few – we must replicate and expand what’s working.

When President Obama launched the My Brother’s Keeper (MBK) initiative one year ago, he did so with a powerful call to action to help more of our young people stay on the right track and achieve their full potential. Too many young people, including boys and young men of color, face daunting opportunity gaps and, like all of us, the President knows that America will be most successful when its young people are successful.

At the launch of MBK, the President called for government, businesses, nonprofits, schools, districts, and individuals, to commit to making a difference in the lives of our nation’s young people. Since then, nearly 200 cities, counties, and tribal nations from 43 states have accepted the MBK Community Challenge, a call to build and execute locally driven plans with a focus on achieving excellence and equity from birth through adolescence and the transition to early adulthood.

Last May, I joined young men in Denver, an MBK Community, for an open and honest discussion about their lives – their challenges, support systems, and visions for the future. So many of their stories – both heart-wrenching and inspiring – stick with me, but what perhaps struck me most were the words of Elias, who was once told he was “an exception to his race.” The words weighed heavily on him, as they did on me.

Elias told me that he doesn’t want to be an exception to his race. Rather, he envisions a system where schools partner with nonprofits and higher education to create a pipeline to success that will work for everybody.

The good news is that Elias’s vision is starting to take shape. Partners from across the country are recognizing the important work of MBK, with more than $300 million independently pledged by foundations and corporations. And, in July, AT&T, the NBA, and the NBA Players Association announced efforts that will expand opportunities for learning, mentorship, volunteerism, and jobs for all youth, including boys and young men of color. From nonprofits and foundations to businesses, private sector efforts are accelerating the work of MBK to promote academic and career success, and mentoring and public engagement.

The Department of Education is doing its part, too, by improving existing programs to better serve our youth, and by creating new and better public-private partnerships that best serve the needs of our young people. And, the Council of the Great City Schools is coordinating the leaders of 63 of the largest urban school systems in the country in an unprecedented joint pledge to change life outcomes by better serving students at every stage of their education. 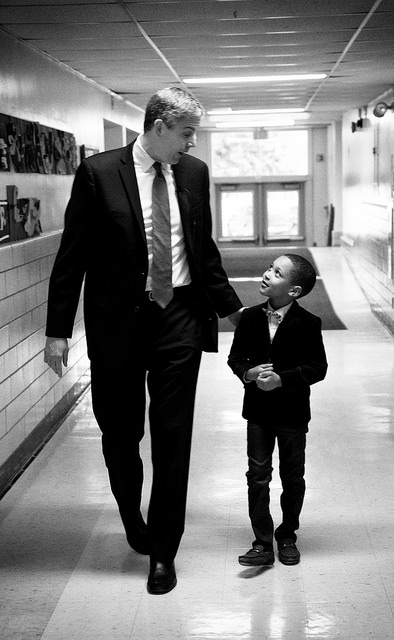 In December, the Department of Education convened the White House Summit on Early Education, where we announced $750 million in new federal grant awards from the Departments of Education and Health and Human Services, to support early learning for over 63,000 additional children across the country.

And, I was pleased to join US Attorney General Holder in releasing a Correctional Education Guidance Package, which builds upon the recommendations in the My Brother’s Keeper Task Force report. The guidance will help states and agencies strengthen the quality of education services provided to the approximately 57,000 young people in confinement every day.

Great efforts are underway in communities across the country – but our young people still face great challenges. To truly change the face of opportunity in this country – to truly make the bounty of America available to the many, and not just the few – we must replicate and expand what’s working.

Our work is far from over. Let’s move forward, together, to do right by all our nation’s young people.

Read the My Brother Keeper’s Task Force one-year progress report to the President.