The Promise of Wind Energy

March 12, 2015 at 3:00 PM ET by Dan Utech
Twitter Facebook Email
Summary:
Wind energy continues to be one of America’s best choices for low-cost, zero-pollution renewable energy – and it is one of our strongest tools to combat climate change. 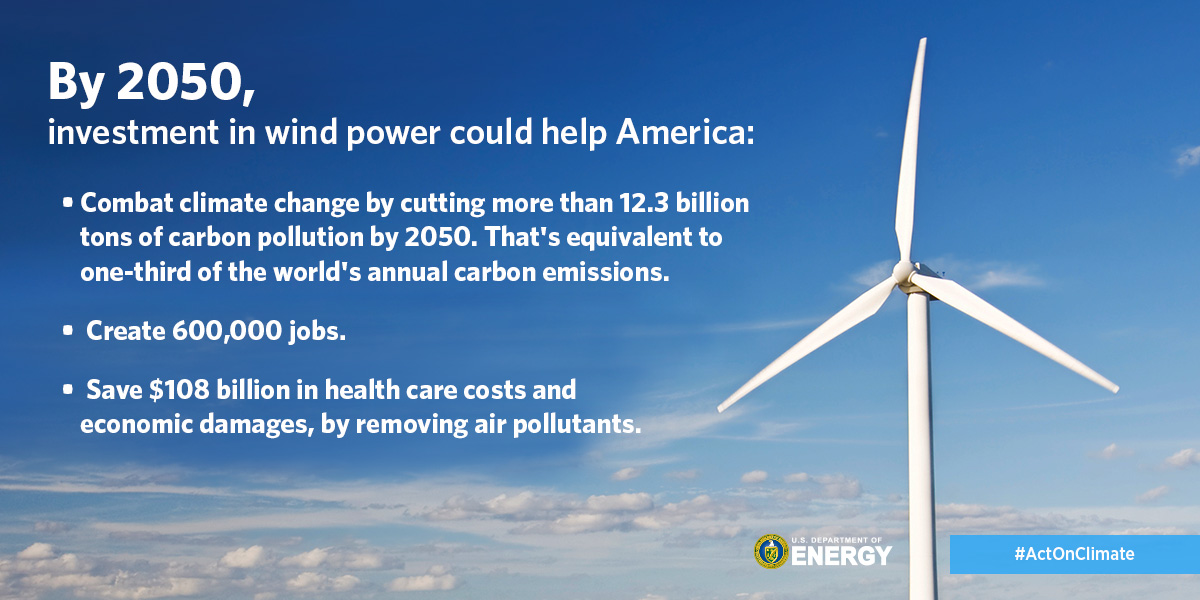 No challenge poses a greater threat to future generations than climate change. In June 2013, President Obama put forward a comprehensive Climate Action Plan. We are making great strides in advancing our climate goals, and perhaps nowhere has progress been as dramatic as in renewable energy.

Today, we harness three times as much electricity from the wind and 10 times as much from the sun as we did since President Obama took office. Wind energy is emerging as a powerhouse in the U.S. energy mix – supporting over 50,000 American jobs and supplying enough energy to power 16 million homes. Wind power advances our energy independence, bolsters our energy security, and combats climate change. A third of all new generating capacity has come from wind over the past five years, and the United States ranks first in the world in wind power generation.

Building on this progress, today the Department of Energy released Wind Vision: A New Era for Wind Power in the United States, a comprehensive analysis of the U.S. wind energy industry. The report shows that the nation can deploy wind power to economically provide 35% of our nation’s electricity and supply renewable power in all 50 states by 2050.

To support continued progress in deploying wind power and other renewable energy, the Administration has proposed a permanent extension of the production tax credit for wind. And today’s report makes clear that wind power is available across the country as one important energy resource that states can rely on to meet the power sector carbon reduction targets set forward in the EPA’s Clean Power Plan.

Some key findings from the report:

Wind energy continues to be one of America’s best choices for low-cost, zero-pollution renewable energy – and it is one of our strongest tools to combat climate change.

Step by step, we are securing the foundation for a clean energy future.

And the promise of wind energy for generations to come.