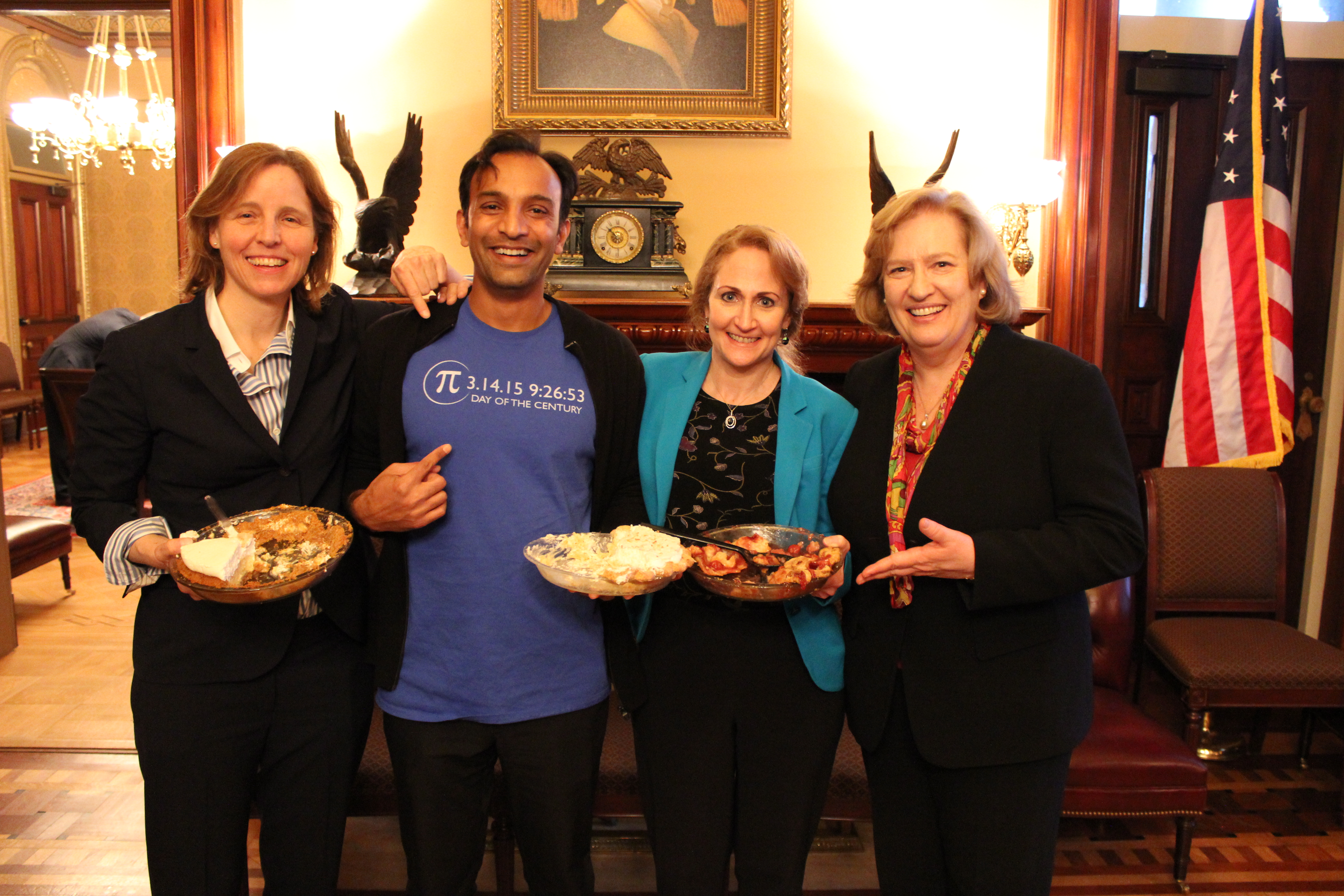 The importance of math education and numeracy skills to all Americans cannot be overstated and so, in support of President Obama’s continued focus on celebrating STEM enthusiasts of all ages, we at the White House couldn’t resist getting in on the Pi Day fun!

Mathematically, the constant pi is defined as the distance around a circle (the circumference) divided by the distance across it (the diameter).   The digits in pi never end and never form a repeating pattern; in mathematical terms it’s known as an irrational number, meaning it cannot be represented as a fraction.

Many ancient civilizations recognized the unique relationship between pi and circles. For example, the Babylonians approximated the value of pi as 3, based on the relationship between the area and radius of a circle. Later, the Greek mathematician Archimedes formulated a geometrical algorithm to estimate pi by comparing the perimeters of polygons and circles.  Today, pi can be calculated to more than a trillion digits thanks to improved computational technology.

Here are a few examples of how pi appears outside of the classroom and in our daily lives:

Calculations of curves rely on pi, including curves that describe oscillations or periodic motion. We experience oscillatory patterns everyday through sound, swings on a playground, and the springs in car suspensions.

Pi is also beautifully represented in natural phenomena. When an object is thrown into a pool of water, the ripples propagate in near-perfect concentric circles. We also find arcs and rings in a rainbow after a spring storm, the trunks of trees, and even the rings of Saturn.

Each year, Pi Day is to makers, innovators, and inventors around the country what the Super Bowl is to football fans - a chance to celebrate and share the unique, fun, and useful applications of this number in what they create. Community, library, museum and school maker spaces across the country, from Buffalo, NY to Normal, IL are hosting Pi parties and workshops to work on projects and activities that integrate pi.

Scientists at the National Institutes of Health (NIH) and NASA Jet Propulsion Laboratory (JPL) are also getting in on the fun this year.  NIH will celebrate the intersection between the quantitative and biomedical sciences with a day of events that includes a lecture by Dr. Eric Lander, Director of the Broad Institute and co-chair of the President’s Council of Advisors on Science and Technology, tours of NIH facilities for local high school teachers, and, of course, pies.  JPL is issuing a math challenge that includes four real-world, NASA math problems for students in grades 4 through 11 to give students insight into the calculations that NASA scientists do and an opportunity to see how the math they learn in school can be applied to real-world situations.

Want to join in the Pi Day fun?  Share your favorite applications of pi, your Pi Day celebrations, and even your best pies with us on Twitter using the hashtag #PiDay.