Late last year, in an historic joint announcement with China, President Obama set an ambitious goal for reducing the greenhouse gas emissions driving climate change – a clear sign that the United States’ commitment to leadership on climate change at home and abroad is stronger than ever. 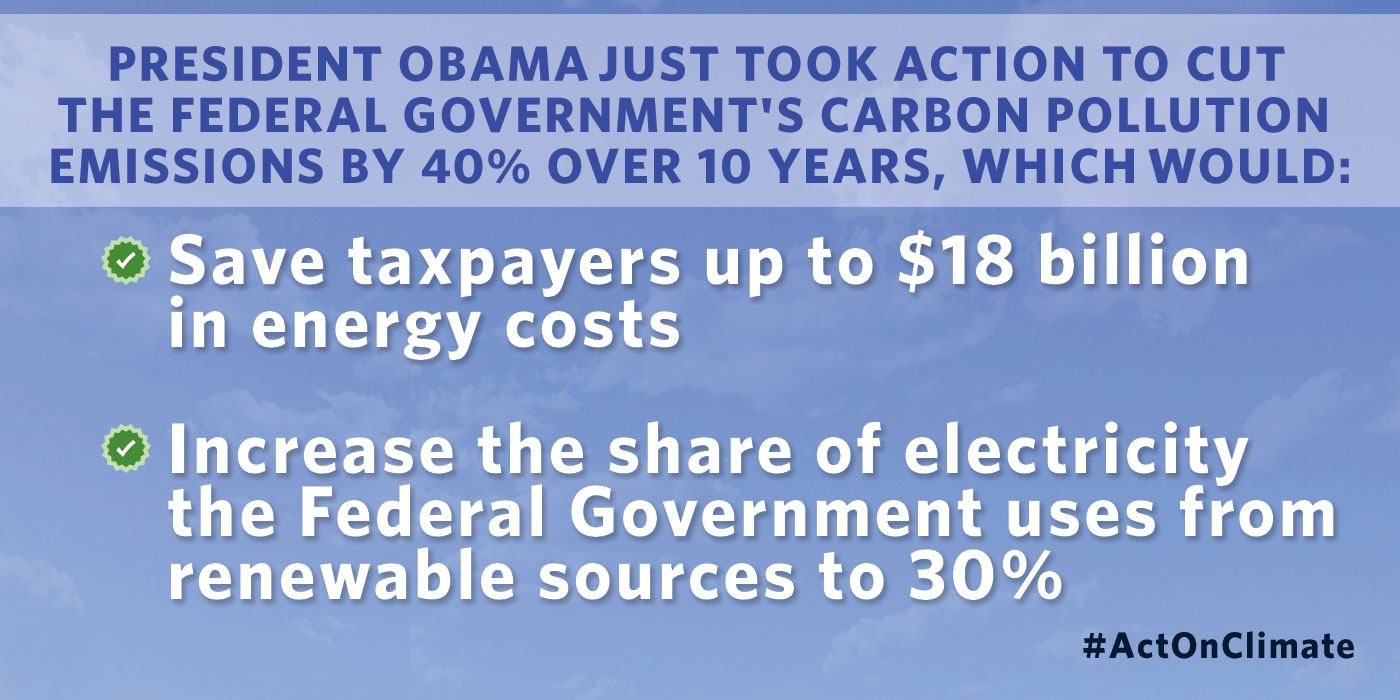 In the latest effort to continue that push, this morning, President Obama signed an executive order that will help us stay on track to meet the new target pledged in China and ensure that the federal government leads by example as the United States moves boldly to reduce greenhouse gas emissions while boosting clean energy. This new sustainability plan for the next decade directs federal agencies to cut their greenhouse gas emissions by 40 percent by 2025. That means big cuts to the dangerous emissions driving climate change – and also big savings. In addition to 21 million metric tons of emission reductions – the same as taking 4.2 million cars of the road for a year — achieving this goal will save taxpayers up to $18 billion in avoided energy costs between 2008 and 2025.

Today’s action builds off of the strong progress the federal government has made over the past six years. Already, federal agencies have reduced greenhouse gas emissions by 17 percent since the President took office, and increased the share of electricity consumed from renewable sources from 3 percent to 9 percent in 2013. Agencies have also made progress on a number of other fronts, like reducing water use by 19 percent since 2007. But there is much more work to do – and that’s what today’s announcement is all about.

To achieve this level of government-wide progress, each of our agencies has had to step up and take real action. And it’s working. Here are a few examples:

Department of Energy: As a leader in addressing the Nation’s energy and environmental challenges through science and technology, DOE takes energy management and GHG reductions seriously. The Department set a GHG goal to reduce its emissions 28 percent by 2020. As of 2013, the Department has exceeded that goal and cut its emissions by more than 34 percent.

Environmental Protection Agency: EPA’s mission is to protect public health and the environment, so it makes sense that the Agency is a leader in the federal government’s efforts cut its own emissions. In 2010, EPA set a goal to reduce its greenhouse gas emissions 25 percent by 2020. As of 2013, the Agency had exceeded that goal and cut its emissions by more than 57 percent.

General Services Administration: GSA oversees the business of the U.S. federal government, putting the Agency in a leadership position to support government-wide GHG goals. GSA set a GHG reduction goal to reduce its emissions 28 percent by 2020. As of 2013, the Agency has exceeded that goal and cut its emissions by more than 53 percent.

It is not just the agencies that have environment and energy as part of their missions that are showing leadership in meeting the President’s climate and energy goals. What is remarkable about this effort is how agencies ranging from NASA to the Department of Health and Human Services now see this as part of their mission. The Department of Defense, for example – which has the largest footprint in the federal government – has reduced its emissions by 10 percent, and is making significant progress toward its goal of deploying 3 gigawatts of renewable energy on military installations by 2025 — enough to power 750,000 homes. 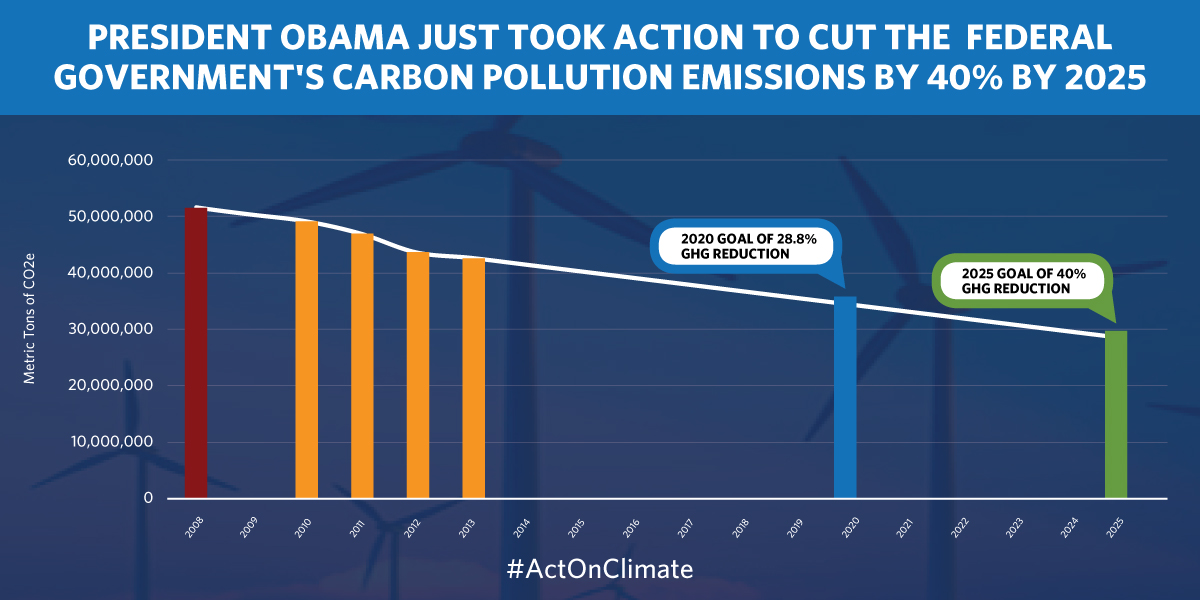 This kind of leadership matters. With the federal government as the single largest consumer of energy in the nation – with a footprint of 360,000 buildings, 650,000 fleet vehicles, and $445 billion spent on goods and services – our progress can have broad impacts. And our actions can set a clear example for other sectors of the economy, demonstrating how cutting emissions can also support their bottom lines.

Working with Federal Suppliers to Set An Energy Efficiency Example

That’s why the Administration hosted a roundtable today with some of our largest federal suppliers, who together account for about $45 billion in federal contract spending. Each of these companies is demonstrating leadership in cutting greenhouse gas emissions, with some announcing emissions reduction goals for the first time. President Obama encouraged the companies to continue to pursue aggressive pollution cuts, and emphasized the importance of working together to reduce emissions through the next decade.

To highlight the leadership of these companies and encourage more progress across the federal supply chain, the Administration also released a new scorecard today. Each year, this scorecard will track whether our major suppliers – companies that each receive more than $1 billion in Federal business each year – have set greenhouse gas reduction targets and publicly disclose their emissions data.

Working together, the federal government and the private sector can have a real impact in the fight against climate change. In fact, the combined actions of the federal government and commitments of its major federal suppliers represent a GHG reduction of at 26 million metric tons between 2008 and 2025 -- the equivalent of taking nearly 5.5 million cars off the road for an entire year.

That kind of progress supports efforts to reach the President’s bold target of cutting economy-wide emissions 26-28 percent by 2025. It also strengthens the United States’ leadership on the international stage, ensuring that we can tackle the global threat of climate change and leave behind a safer, more prosperous world.