The Future of Religion and Diplomacy

Ed. note: This is cross-posted on the U.S. Department of State's official blog. See the original post here. 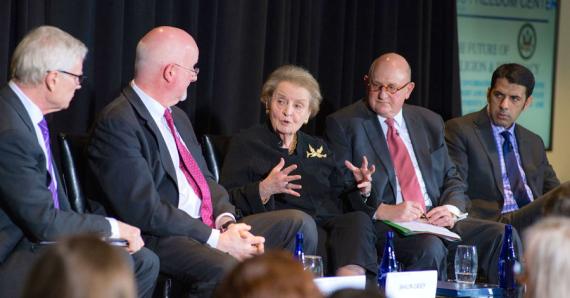 Secretary Kerry’s mantra “religion matters” has been repeated on several occasions recently. In a message to State Department diplomats in Washington and overseas, the Secretary said, “In every country, in every region of the world, and on nearly every issue central to U.S. foreign policy, religious institutions and actors are among the drivers of change.” This policy priority was also the theme at a March 3 event on the future of religion and diplomacy at the Newseum religious freedom center. Because of her long belief on the important role religion plays in foreign affairs, I invited former Secretary of State Madeleine Albright to be part of the discussion. She compellingly argued, “Religion is a powerful force whose impact depends entirely on what it inspires people to do. The challenge for policy-makers is to harness the unifying potential of faith, while containing its capacity to divide. That must be the ultimate goal and purpose of the efforts we are discussing today. To succeed, we will need to learn how to talk about religion in ways that do not offend the people we are trying to reach.”

Joining Secretary Albright and me were Special Representative to Muslim Communities, Shaarik Zafar and Special Envoy to Monitor and Combat anti-Semitism Ira Forman who are also part of the Office for Religion and Global Affairs. These two colleagues and I abide by the principle of two-way engagement that listens first. In discussing some of the challenges our office faces, Special Representative Zafar noted, “We have to engage broadly with Muslim communities on climate, entrepreneurship, and a range of issues.” Yet, the fundamental question the former secretary and the special representative both raise is this: in a pluralism of religious beliefs that include the right to not believe, how does the United States engage these faith leaders?

First, I believe part of the answer to this question must involve addressing issues of religious freedom. I am grateful for the work of the Ambassador-at-Large for International Religious Freedom David Saperstein and the International Religious Freedom office at the State Department with which my Office of Religion and Global Affairs works closely. The second answer to the question of how the U.S. should engage religious leaders and communities is we must do the obvious-- engage religious leaders and communities across the faith spectrum. But is also important to engage with secular and non-religious leaders and organizations that have an interest in religion’s impact on foreign policy. In our engagement we must remember that religious beliefs and practices can shape views on a wide range of issues, from gender equality to the role of the state.

Secretary Kerry says we must “engage more closely with faith communities around the world, because we need to partner with them to solve global challenges.” What are your thoughts on how the United States should engage religious actors and institutions on foreign policy issues?

Shaun Casey serves as the U.S. Special Representative for Religion and Global Affairs. You can follow him on Twitter at @SpecialRepCasey.