When We Say "Consumer," We Mean "You." Here Are 5 Protections You Should Know About:

March 26, 2015 at 3:46 PM ET by Lindsay Holst
Twitter Facebook Email
Summary:
See what the Consumer Financial Protection Bureau just announced, and how it builds on the reforms you might not have realized the President put in place to protect you (and your money).

So with that in mind, if you're someone who wants to buy a house, pay for school, get solid retirement advice that actually leaves you with more money in your pocket, avoid hidden credit card fees, and generally avoid getting unfairly trapped in a cycle of debt, we've got good news: The Wall Street reforms the President has put in place are working for you.

One of the core beliefs of this Administration has always been that good government ought to look out for American consumers and protect them from abusive and unfair practices, and that's why in 2010, we created a new independent agency responsible for doing exactly that: the Consumer Financial Protection Bureau (CFPB).

As a now fully operational, independent watchdog, the CFPB is responsible for cracking down on bad actors like unscrupulous lenders, or fraudulent debt collectors, and giving you the information you need to take charge of your financial future. And today, they took another huge step toward protecting working families against abuses in payday and similar types of lending.

Read on to learn more about what the CFPB announced today, and how it builds on the reforms you might not have realized the President put in place to protect you (and your money).

1. Moving toward new rules to end payday and other lending practices designed to trap families in cycles of debt.

Payday loans (and other title and installment loans) are marketed as a good thing – an emergency tool to help workers meet their short-term credit needs. The problem is that they too often trap families in an expensive cycle of debt and fees. Eighty percent of payday loans are rolled over or followed by another loan within 14 days – causing the average borrower to stay in debt for about 200 days out of the year.

For the first time ever, an independent federal watchdog can write rules to help regulate abusive practices in payday lending. That's what the CFPB announced today: a first step toward a proposed approach to creating reasonable safeguards that treat borrowers fairly and help end these endless debt traps. 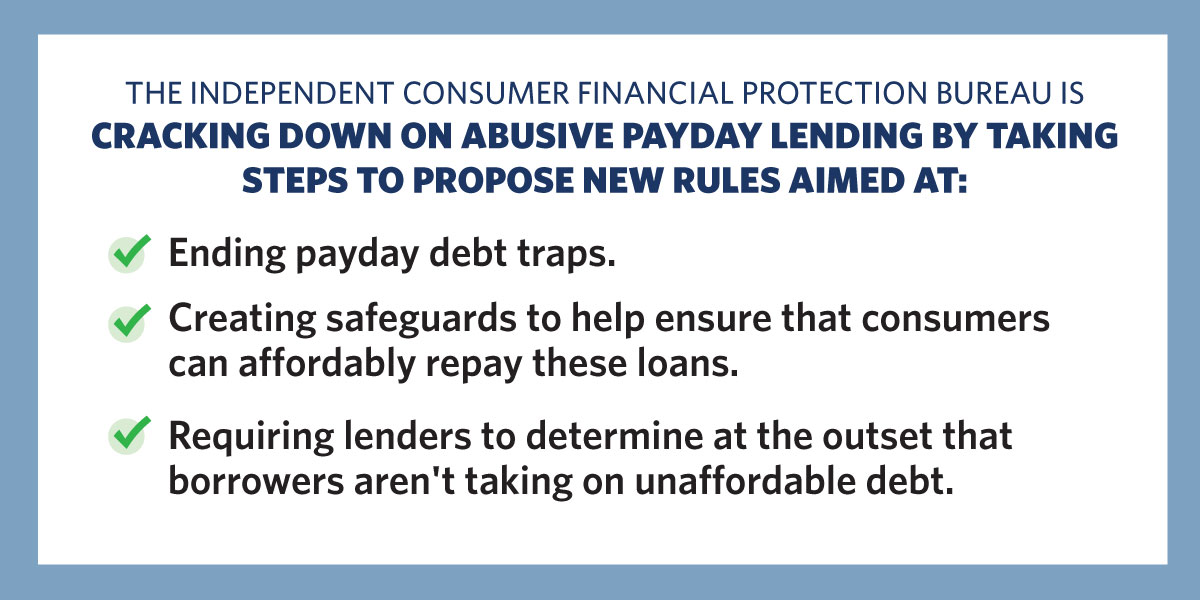 It's called a "conflict of interest" for a reason: Right now, back door payments and hidden fees incentivize retirement advisors to recommend bad investments with high costs and low returns. Every year, these practices sap away about $17 billion from American families' retirement accounts – and there's a good chance they don't even realize it's happening.

More Americans should be able to afford a quality college education – period. Earlier this month, the President signed a Presidential Memorandum that directed the Department of Education to work with agencies across the federal government to help more borrowers afford their monthly loan payments.

Those actions include creating a student complaint system that will allow the Department to more quickly respond to student issues, and establishing a one-stop hub where all federal student loan borrowers can access their accounts and payment processing information. Learn more here: 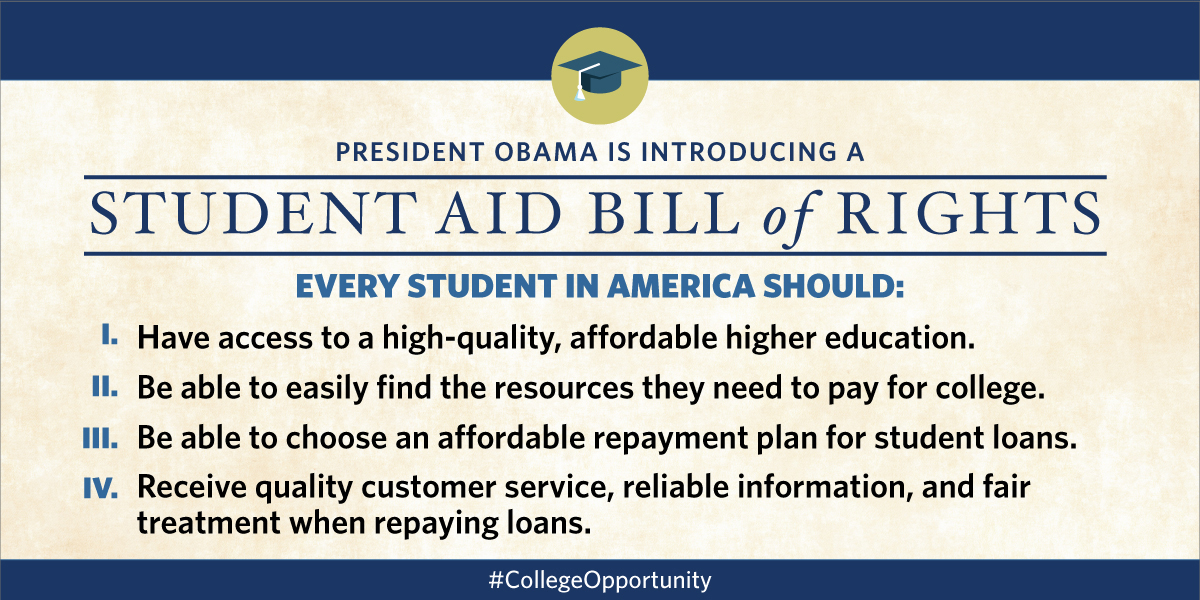 4. Returning more than $1 billion to credit card holders who unknowingly signed up for products or paid for a service they didn't get.

Since its creation, the independent CFPB has cracked down on expensive and often unnecessary credit card add-on products – such as identity protection and disability insurance – and those enforcement actions meant that more than a billion dollars were returned to credit card holders. 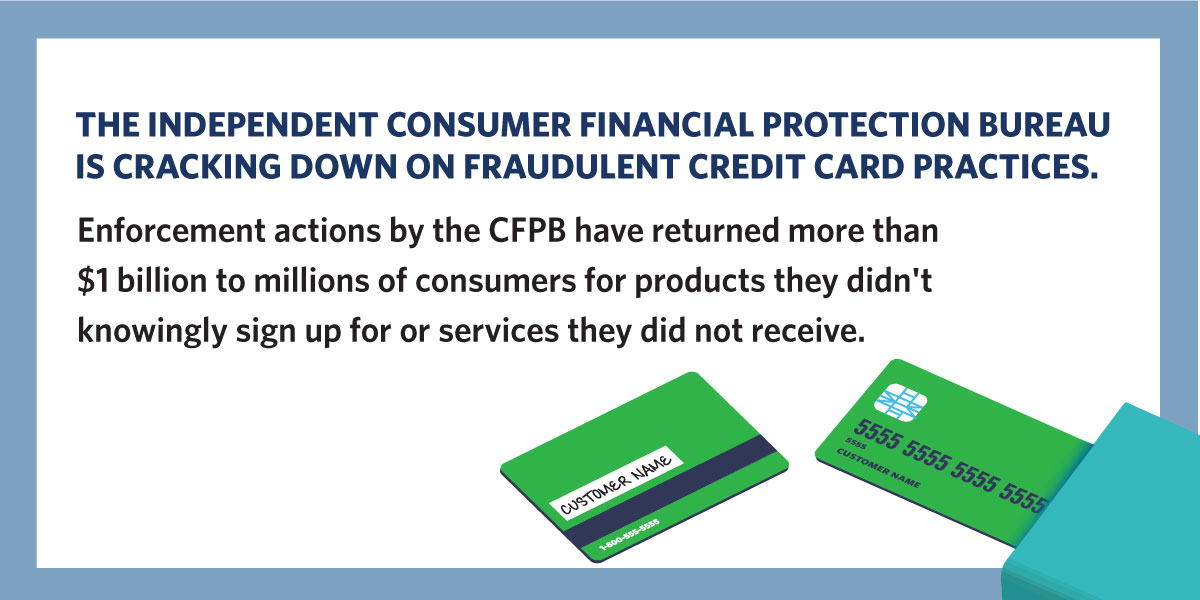 5. Prohibiting lenders from offering you a mortgage that you can't repay.

We all remember the abusive actions and products that hurt so many homeowners during and after the financial crisis. As an independent watchdog, the CFPB has taken multiple actions to make sure that won't happen again. Lenders can no longer offer mortgages that borrowers can't repay, must limit high fees and abusive payment structures, and need to use better disclosures that make their products easier to understand. Now there's a set of ground rules for borrowers – you know what you're paying for, exactly how much you're paying for it, and when you're paying for it. 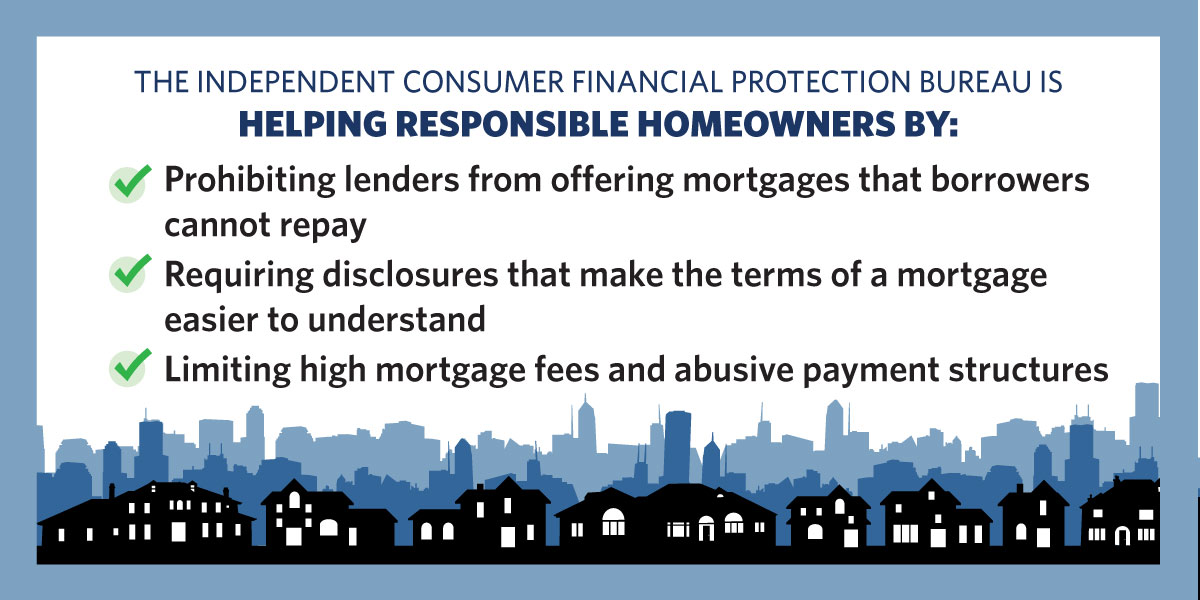 This is what good government looks like. Learn more about what the CFPB announced today – and then take a look at a whole bunch of ways the Obama administration has prioritized protecting the American consumer. (Which is just a fancier way of saying: YOU.)