Week in Review: 5 Years of the ACA, Our Fifth Science Fair, and a Talk About the War on Drugs

March 27, 2015 at 4:44 PM ET by Chris Evans
Twitter Facebook Email
Summary:
From reflecting on and celebrating the fifth anniversary of the Affordable Care Act, to the President's trip to Birmingham for a roundtable discussion on how we can crack down on abusive payday lending, the President had a productive week. See more in our Week in Review.

This week, the President celebrated the fifth anniversary of the Affordable Care Act becoming law, hosted students at the fifth-annual White House Science Fair, sat down with the creator of “The Wire” to discuss criminal justice policy, and traveled to Birmingham, Alabama to highlight new actions to crack down on abusive payday lending practices.

On March 23, 2010, President Obama signed a historic law that has transformed the lives of millions of Americans. Thanks to Obamacare, people across the country have more affordable coverage, higher-quality care, and better health.

Today, more than 16 million Americans have gained health coverage that suits their needs. 76 million people are now benefiting from preventive care coverage. Up to 129 million people with pre-existing conditions are no longer at risk of being denied coverage.

5 years ago, we declared that quality, affordable health care is a right, not a privilege: https://t.co/neS4zHReOQ #BetterWithObamacare –bo

The halls of the White House were filled with science projects Monday, as President Obama welcomed more than 100 young scientists for the fifth-annual White House Science Fair.

The President spoke with students about the role that science, technology, engineering, and math (STEM) plays in their lives, and urged them to keep exploring, dreaming, and asking why. He also announced a number of ambitious steps to inspire young people to engage with STEM fields and help them achieve their goals.

Watch the President interact with the students and their projects, and see more from Monday's Science Fair.

A Baltimore Beat Reporter and a State Senator from Chicago

A beat reporter in Baltimore and a state senator from Chicago: two men who saw the disproportionate impact of America's war on drugs firsthand early in their careers. This week, that former reporter and creator of HBO's "The Wire" -- David Simon -- and that former young senator -- President Barack Obama -- sat down to talk honestly about the challenges law enforcement face and the consequences communities bear from the war on drugs.

Watch the video and listen to what they had to say.

Cracking Down on Abusive Payday Lending

President Obama traveled to Birmingham, Alabama yesterday to highlight new actions that the Administration is taking to protect you -- the American consumer.

While advocating for the American middle class, the President praised the Consumer Financial Protection Bureau (CFPB) for recently taking new steps to crack down on abusive payday lending practices. President Obama also hosted an economic roundtable at Lawson State Community College, where he spoke about the progress we’ve made in building a safer and stronger financial system.

Watch the President’s remarks and learn more about how we’re cracking down on abusive payday lending.

98 Percent of Americans Are Connected 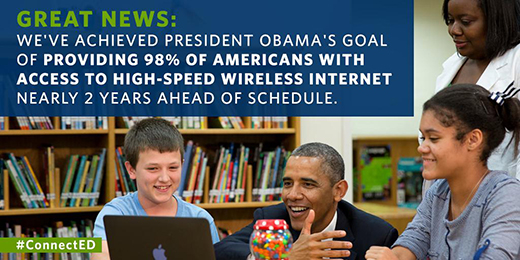