#LeadOnLeave Notes from the Road: Seattle

April 1, 2015 at 3:39 PM ET by Secretary Thomas E. Perez
Twitter Facebook Email
Summary:
Follow along with Secretary Tom Perez as he kicks off a nationwide road show to highlight the progress that states across the country are making on paid leave.

Today I’m excited to be in Seattle kicking off a nationwide road show that will shine a spotlight on the issue of paid family leave, and I hope you’ll follow along. As I’ve written on the blog before, the United States lags behind the rest of the world on paid leave. But places like Washington State are making progress, and we want to highlight that progress and encourage other states and cities to follow suit. We’re calling the tour, “Lead on Leave: Empowering Working Families Across America.”

With a little help from my team, I’ll be live blogging throughout the day to share updates from my meetings with local businesses, workers and community leaders.

I’ll be joined today by Sydney Marino, a woman who wrote me a letter last fall on why paid leave is important to her family.

Sydney shouldn’t feel forced to make this choice. A great nation should give people the tools to succeed at work and also meet their obligations at home, and that’s why this national conversation on paid leave is so critical. 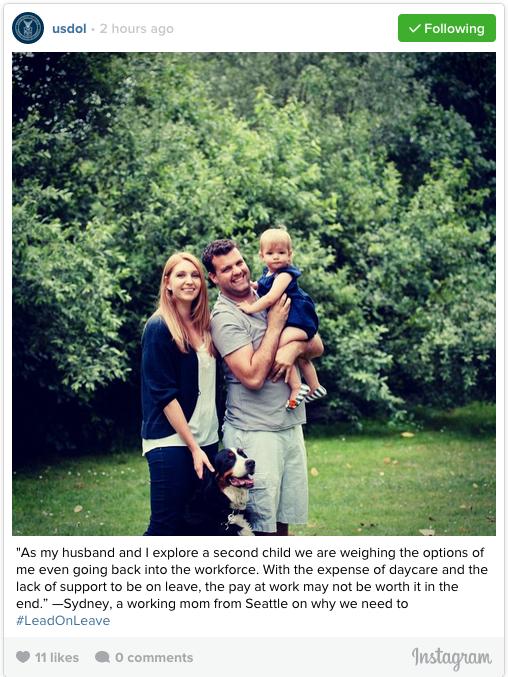 LIVE on #Periscope: Live from Seattle: Lead on Leave https://t.co/sknyIR5CDS

@LaborSec - it was a privilege to meet you. Thank you for your time and listening to my story. The children are our future. #LeadOnLeave

I just got back from scooping some ice cream at Molly Moon’s, a business that pays its employees a fair wage and, as of today, offers a paid leave policy that will allow employees to receive up to 12 weeks of paid family leave.

Companies that offer family-friendly policies, like Molly Moon’s, benefit from greater worker morale and productivity. They are able to recruit and retain the best talent, and that helps the bottom line. They know that paid leave isn’t just pro-family – it’s pro-business. Employers both small and large understand this; in fact, Microsoft showed its commitment to working families by announcing that they will only contract with vendors and contractors who provide paid leave to their employees.

.@mollymoon is a biz that not only serves delicious ice cream but also offers #PaidLeave to its workers #LeadOnLeave pic.twitter.com/3yB3Z7AaFP

Next, it was on to Seattle Central College.

Later in the afternoon I had a dynamic conversation with other employers, legislators, workers and advocates about the issues that matter most to working families in the Seattle area. One small business owner I met told me, “Businesses are nourishing people but are not nourishing their own employees. I wanted to change that."

"Paid leave is a 'when' question, not an 'if' question." —@LaborSec in Seattle during the #LeadOnLeave Tour

Because we haven’t been leading on leave, we are stifling economic growth and holding ourselves back from shared prosperity. For example, in Canada, where they have generous paid leave laws and provide access to affordable child care, women’s labor force participation is considerably higher than it is here in the United States. If we had simply kept pace with Canada since 2000, we would have an estimated 5.5 million more women in the workforce.

This is why paid leave is one of the cornerstones of President Obama’s middle-class economics agenda. He is proposing more than $2 billion in new funds to help get state paid leave programs off the ground, and has directed us at the Labor Department to invest $1 million of existing money for state and local governments to conduct feasibility studies for their own paid leave programs. He also signed a presidential memorandum directing federal agencies to advance up to six weeks of paid sick leave for parents with a new child.

I believe ultimately that a national paid leave law is a question of “when,” not “if.” It’s encouraging to see the progress in places like Washington, but we’ve got a long way to #LeadOnLeave.

Stay tuned for more updates from other states I will visit in the coming weeks.