April 3, 2015 at 9:34 AM ET by Jason Furman
Twitter Facebook Email
Summary:
The March employment report reflects a pace of monthly job growth below the recent trend, coming on the heels of February’s strong report. The unemployment rate was stable, broader measures of unemployment fell, and hourly earnings continued their rise.

The March employment report reflects a pace of monthly job growth below the recent trend, coming on the heels of February’s strong report. The unemployment rate was stable, broader measures of unemployment fell, and hourly earnings continued their rise. A range of factors including the weather and the global economic slowdown have affected economic data for the first quarter. The President has been clear that he will continue to push for policies including investments in infrastructure and relief from the sequester that would help ensure the strong underlying longer-term trends persist.

1. The private sector has added 12.1 million jobs over 61 straight months of job growth, extending the longest streak on record. Today we learned that total nonfarm payroll employment rose by 126,000 in March, driven by a 129,000 increase in private-sector employment. This particular month’s job gains were below the recent trend, as job growth in a number of industries slowed somewhat (see point 5). Over the past twelve months, the private sector has added 3.1 million jobs, nearly the highest year-over-year growth in the recovery so far. 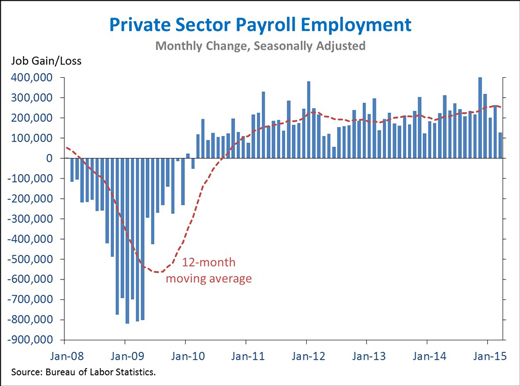 2. Real aggregate weekly earnings have risen nearly 5 percent over the last twelve months. Real aggregate earnings track the purchasing power of total wages and salaries paid to U.S. private-sector employees, reflecting the combined effects of rising employment, rising wages, and a longer workweek. Aggregate earnings are nearly 7 percent above their pre-crisis peak. Indeed, they have recovered nearly twice their losses during the recession. Year-over-year aggregate earnings growth trended about 2-3 percent at an annual rate in recent years, but has risen to 5 percent year-over-year in recent months as hourly earnings have begun to rise (see point 3). 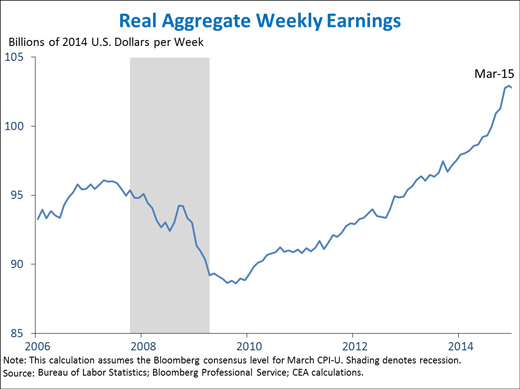 3. Over the past twelve months, rising real hourly earnings accounted for nearly half the increase in real aggregate weekly earnings. The large contribution of rising hourly earnings is a recent trend. Aggregate earnings reached a trough in December 2009, and over the following year-and-a-half, real hourly wages declined. The aggregate earnings increase during that early period was driven by a combination of rising employment and a longer workweek. Over the next three years, both hourly earnings and the workweek were largely stable, with rising employment accounting for 80 percent of the growth in aggregate earnings. Real wage growth over the past year has been a major contributor to the speed-up in aggregate earnings, due to both rising nominal wages and slowing consumer price growth as oil prices have declined. While the recent progress is encouraging, there is more work to do to ensure that real earnings growth is sustained and shared with a broad range of American families. 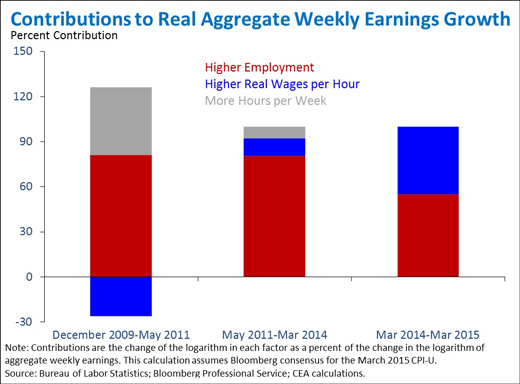 4. The overall share of jobs held by women rose from an average of 48.5 percent in 2001-2007 to 49.3 percent in March 2015. This 0.8 percentage point increase masks substantial variation within industries. Female workers shifted out of smaller industries like financial activities and information services where the female share declined by 3.1 and 3.7 percentage points, respectively and into higher-employment industries like retail trade. Women’s share of employment also increased somewhat in the government sector, where 57 percent of workers are female. Accordingly, women were disproportionately affected by the cuts to government employment that occurred between 2010 and 2013, but they have also disproportionately benefited from net job growth in this sector since mid-2013. 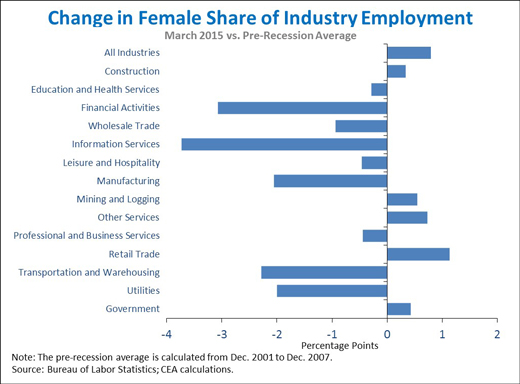 5. Job growth in a number of industries fell below recent trends in March. Looking over the 61-month streak of private-sector job growth, March was an especially weak month for mining and logging (-11,000), manufacturing (-1,000), leisure and hospitality (+13,000), and construction (-1,000). The weakness in mining and logging is likely attributable in large part to the recent decline in oil prices. March was a stronger than usual month in retail trade (+26,000) and health care and social assistance (+30,000). Across the 17 industries shown below, the correlation between the most recent one-month percent change and the average percent change over the last twelve months rose to 0.51 from 0.13 last month, remaining somewhat below the average correlation over the past two years.