We the Geeks: Journey to Pluto

April 8, 2015 at 10:00 AM ET by Tamara Dickinson and Meredith Drosback
Twitter Facebook Email
Summary:
The White House hosts “We the Geeks: Journey to Pluto,” where experts from NASA will talk about the New Horizons mission and the exciting discoveries scientists hope to make about Pluto.

In the farthest reaches of our solar system, nearly 3 billion miles away, lies the small, icy body that has inspired wonder for generations of astronomers since its discovery 85 years ago. Pluto, a dwarf planet, is so far away that it takes nearly 250 years to orbit the Sun. This summer, we will come to know Pluto in infinitely more detail than ever before.

NASA’s New Horizons mission launched into space in 2006 and has been en route to Pluto for nine years. In July 2015, it will reach its destination, billions of miles away, for the first-ever close view of the dwarf planet and its moons. New Horizons will use an array of instruments to take pictures and answer basic questions about the temperature and composition of Pluto’s atmosphere, its surface and geology, and how it interacts with the constant stream of charged particles emanating from the Sun.

Looking ahead to this exciting close encounter, the White House will host “We the Geeks: Journey to Pluto” tomorrow, April 9 at 1:00 p.m. EDT. We’ll talk to experts from NASA’s New Horizons team to learn about the mission and the exciting discoveries scientists hope to make about Pluto.

The panel of experts will include:

Hear from some of the scientists and engineers who are working to give us our first up-close glimpse of Pluto by watching the latest "We the Geeks" hangout live at WhiteHouse.gov/we-the-geeks and on the White House Google+ page tomorrow, April 9, at 1:00 p.m. EDT.

Got questions? Ask them using the hashtag #WeTheGeeks on Twitter and on Google+ and we'll answer some of them during the live hangout. 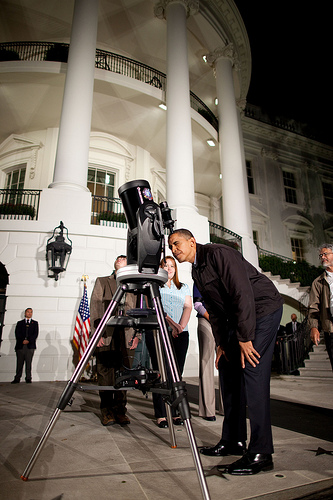 President Barack Obama looks through a telescope during the Astronomy Night event on the South Lawn of the White House. October 7, 2009. (Official White House Photo by Chuck Kennedy)