This Day in History: The Beginning of the End for the Civil War

April 9, 2015 at 6:38 PM ET by Chris Evans
Twitter Facebook Email
Summary:
Confederate General Robert E. Lee surrendered to Union General Ulysses S. Grant on this day 150 years ago. The Articles of Agreement marked the beginning of the end for the Civil War.

Seven score and ten years ago, General Robert E. Lee of the Confederacy surrendered his army to Union General Ulysses S. Grant at Appomattox, Virginia. That spring day in 1865 ultimately marked the closing of the deadliest war in American history.

Quickly running low on supplies, Lee launched what would be his final campaign on March 25, 1865. His men initially attacked Ford Stedman near Petersburg, Virginia, but found themselves counter-attacked by Union forces less than a week later. Clearly overpowered, the Confederate Army was forced to retreat from their camps in both Petersburg and Richmond.

On April 7, General Grant penned a letter to General Lee offering him the opportunity to surrender and end the war. The letter read:

The result of last week must convince you of the hopelessness of further resistance on the part of the Army of Northern Virginia in this struggle. I feel that it is so, and regard it as my duty to shift from myself the responsibility of any further effusion of blood, by asking of you the surrender of that portion of the Confederate States army known as the Army of Northern Virginia.

General Lee did not originally agree to meet. However, the next day Union troops halted the Confederate retreat and General Lee reconsidered the offer. On April 9, 1865, the two generals met at the home of Wilmer McLean.

After discussing how they had met during the Mexican-American War, the two generals got straight to business. General Grant’s primary concern was having the Confederate army unarmed and General Lee eventually agreed to have his men surrender their weapons. The two men then discussed what to do with rations and the large amount of horses that remained from their use in the war. Grant agreed to give Confederate soldiers around 25,000 rations and allowed them to keep their animals. Take a look at the final agreement below. 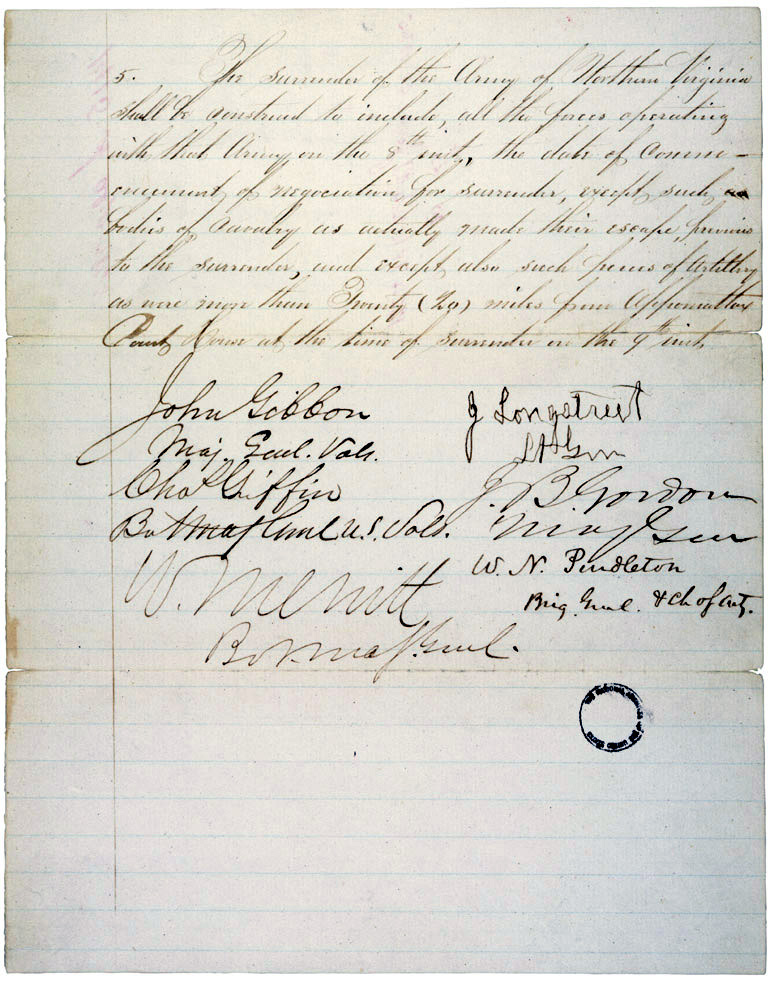 Articles of Agreement in Regard to the Surrender of the Army of Northern Virginia under General Robert E. Lee, April 1865 (National Archives)

Two days after General Lee’s surrender, President Abraham Lincoln delivered what would be his final public address. Speaking from a window above the north door of the White House, the President laid out a few of his ideas for American reconstruction. This was also the first time that President Lincoln publicly expressed extending the right to vote to African Americans who had fought in the war – an idea that would become a major pillar of the reconstruction era. "It is also unsatisfactory to some that the elective franchise is not given to the colored man," Lincoln said. "I would myself prefer that it were now conferred on the very intelligent, and on those who serve our cause as soldiers." Here are three important quotes from President Lincoln’s speech:

“We meet this evening, not in sorrow, but in gladness of heart. The evacuation of Petersburg and Richmond, and the surrender of the principal insurgent army, give hope of a righteous and speedy peace whose joyous expression can not be restrained.”

“By these recent successes the re-inauguration of the national authority -- reconstruction -- which has had a large share of thought from the first, is pressed much more closely upon our attention. It is fraught with great difficulty. Unlike a case of a war between independent nations, there is no authorized organ for us to treat with. No one man has authority to give up the rebellion for any other man.”

“In the present "situation" as the phrase goes, it may be my duty to make some new announcement to the people of the South. I am considering, and shall not fail to act, when satisfied that action will be proper.”

Exploring Our History in National Parks and at National Monuments:

General Lee’s surrender at Appomattox took place 150 years ago, but it continues to be important that we both explore and learn from our national narrative. Our parks and historical sites in every state offer Americans of all ages the opportunity to dig in and explore our history. This includes the historical park at Appomattox as well as dozens of other battlefields and sites from the Civil War.

That’s why President Obama has worked to make it easier for every American to get out and explore what our parks and historical sites have to offer. The President’s Every Kid in a Park initiative gives every fourth-grade student and their families a free one-year pass to National Parks and all other federal lands and waters. Beyond this, the President has worked with others to help cover transportation costs so more schools can afford to take field trips to explore our parks and learn about our nation’s history. Finally, the National Park Foundation recently launched the #FindYourPark initiative, which helps all Americans find National Parks and historical sites that are close by.

Learn more about the Civil War by exploring the National Archives and be sure to find a park near you.