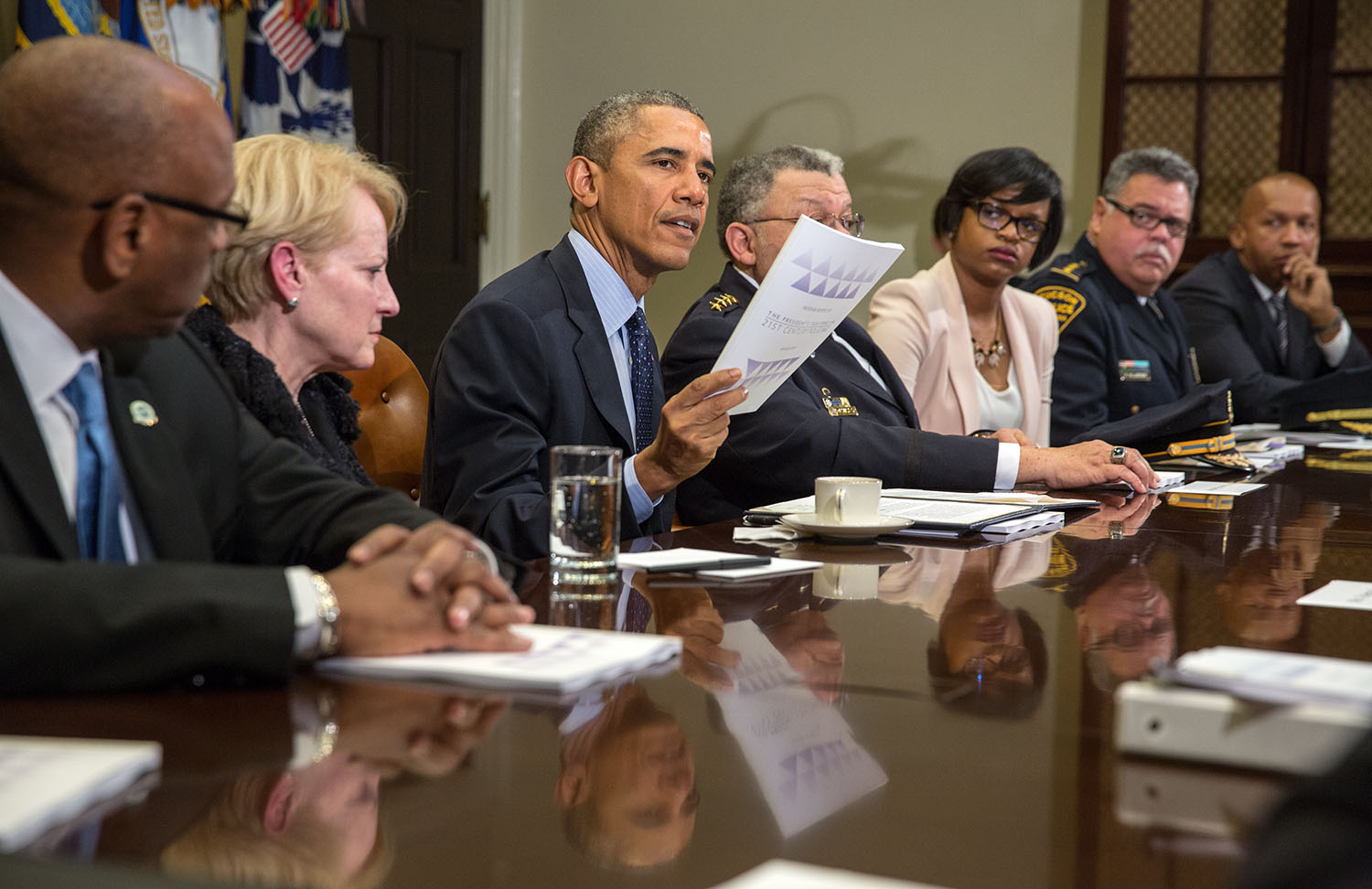 President Barack Obama speaks to the press after a meeting with members of the President's Task Force on 21st Century Policing, in the Roosevelt Room of the White House, March 2, 2015. (Official White House Photo by Chuck Kennedy)

In December, President Obama announced the creation of a Task Force on 21st Century Policing to develop specific recommendations to improve law enforcement and community relations while ensuring public safety. The Task Force, representing a diverse array of law enforcement and civil rights experts along with community leaders, engaged numerous stakeholders and constituency groups across the country to identify meaningful opportunities to improve policing in America.

Last month, the Task Force submitted an interim report with more than 60 recommendations to the President. Among other items, these recommendations cover policy, oversight, technology, social media, community policing, crime reduction, training, education, and officer wellness and safety. The report and recommendations place significant emphasis on the potential of data and technology to improve policing outcomes and foster community trust.

Yesterday at the White House, as part of an ongoing effort to respond to these data/technology recommendations, over a dozen police chiefs, municipal Chief Technology Officers, and other leaders from 16 cities and counties across the nation collaborated with technologists, data scientists, law enforcement thought leaders, foundations, issue experts, Presidential Innovation Fellows, nonprofits, and Administration officials. 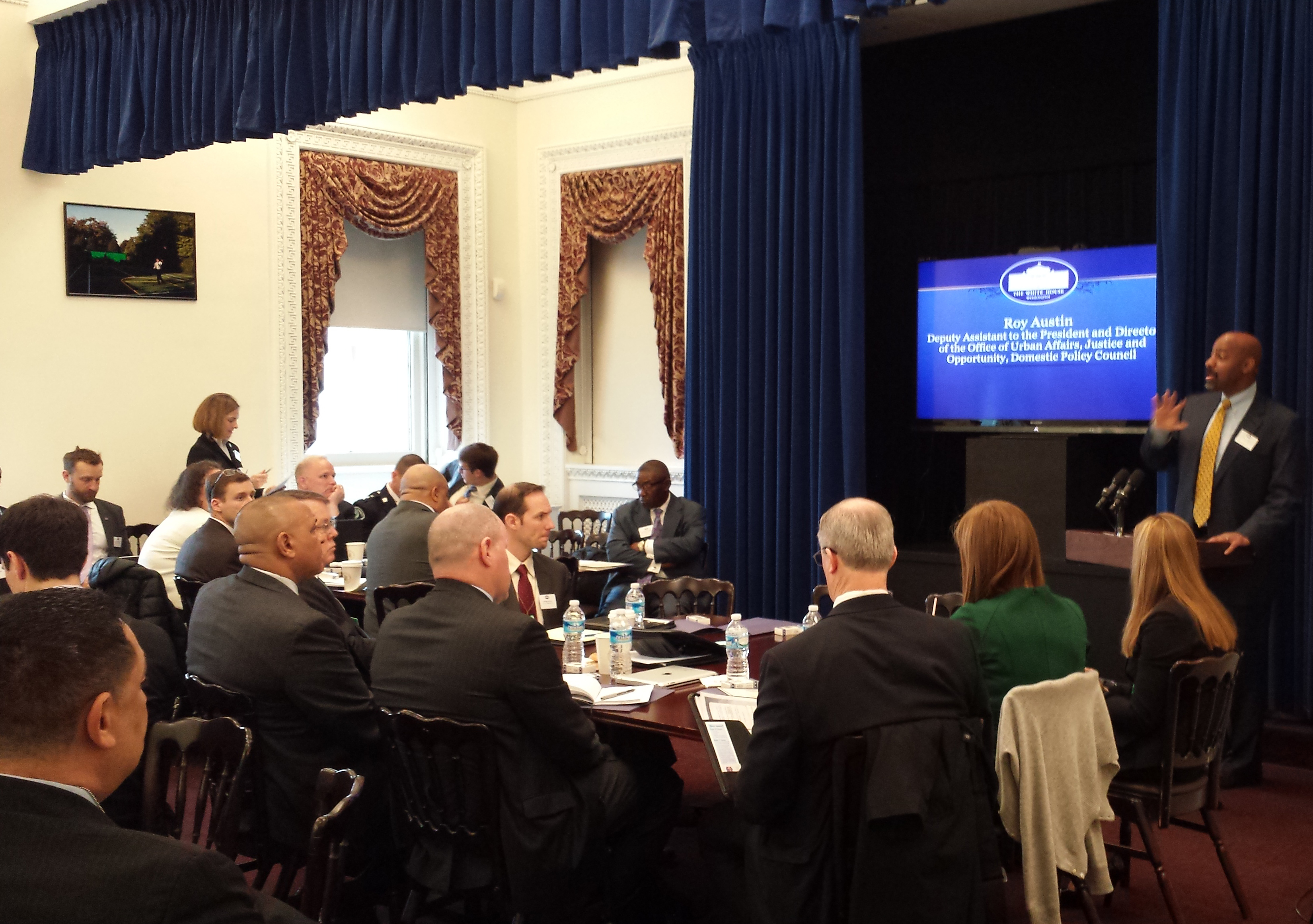 First, the group heard from police and municipal leaders about innovative solutions that they have already put into practice in their municipalities. These leaders shared existing approaches, insights and innovations that other communities could take back and start implementing immediately. Starting with lightning presentations from four communities, the Police Chiefs of Camden County, NJ and Charlotte-Mecklenburg, NC shared their work on the foundational importance of creating strong internal accountability and community feedback systems. This included steps already taken and vision for the enormous opportunities which exist to analyze the rich data available on police/citizen encounters to improve police practices, community voice, and community trust. Both Dallas and Los Angeles leadership shared the power of opening up key data sets to the public, bringing transparency and context to the complexities of police work.

Next, the group collaborated to surface promising practices and existing efforts — identifying opportunities to build on and expand individual efforts to benefit a broader range of communities. At the working session, attendees shared experiences, identified new solutions, and explored opportunities to reduce inappropriate police conduct, better engage public input in real time, and enhance community trust. Many of these departments made new commitments to open up data that had previously been inaccessible to the public.

It is critically important that the recommendations of the President’s Task Force be put into practice without delay by police departments in communities across the country. We are pleased that groups like the International Association of Chiefs of Police, the Fraternal Order of Police, and the Leadership Conference for Civil and Human Rights have done a recommendation-by-recommendation review of the Task Force Report with their memberships and provided the White House with some of their thoughts about implementation.

Yesterday’s event left us encouraged because these forward-thinking police departments have stepped forward to take on these innovation challenges, have already been working collaboratively to turn the promising ideas in the report into results for their community, and are sharing those innovations with others as well as listening for more they can do. These departments are identifying how to use new tools to solve persistent problems. Yesterday’s conversation at the White House was just the beginning of an ongoing initiative — as it is just one of many lines of effort in support of the Task Force’s work.

We look forward to continuing to engage with yesterday’s participants and others as they take action, using data and technology to build trust, voice, solutions and improve community policing.