April 16, 2015 at 6:20 PM ET by Jeffrey Zients
Twitter Facebook Email
Summary:
Trade Promotion Authority — and the quality jobs, wages, and critical environmental and labor protections that would come from it — is an important step forward for the President’s trade agenda and for leveling the playing field for American workers.

The Senate and House are taking up the Bipartisan Congressional Trade Priorities and Accountability Act of 2015 — an overhaul of Trade Promotion Authority (TPA) that would bring how we trade into the 21st century. TPA — and the quality jobs, wages, and critical environmental and labor protections that would come from it — is an important step forward for the President’s trade agenda and for leveling the playing field for American workers.

Trade authority has a long bipartisan history, dating back to President Franklin Roosevelt. In the decades since the New Deal Congress passed the first trade negotiating legislation, Congress has renewed and modernized that authority 18 different times, under both Democratic and Republican Presidents alike.

Congress last passed TPA legislation in 2002, and an update is more than overdue. 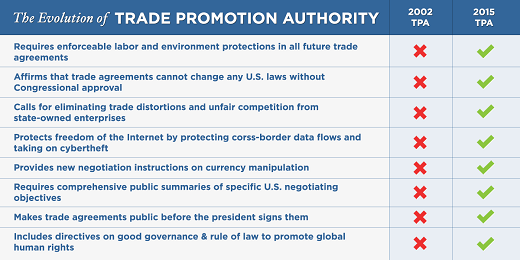 Passing a modernized TPA is important for two reasons.

First, it will help us close the deal on negotiations in the Asia-Pacific on the Trans-Pacific Partnership (or TPP), the most progressive trade agreement in history. It is an important part of the President’s middle-class economics agenda. TPA provides a critical path toward opening more new markets to American goods and services — and supporting the good jobs and wages that come from exports.

The President has made clear he’ll settle for nothing less than a deal that locks in American values, like tough environmental and labor standards. That’s good for our economy, our businesses, and most importantly, for our workers.

TPP will be the greenest trade agreement in history — protecting oceans and combating wildlife trafficking, illegal fishing, and illegal logging across a vast swath of the globe. The countries in the agreement produce $2 out of every $5 of global economic output. And big economies have big impacts on the environment, so this standard really matters.

TPP will also raise labor standards across our trading partners and help raise wages here at home. That’s because enforceable requirements on minimum wages, hours of work, and occupational safety and health are at the center of the agreement. And that’s because trade jobs are good jobs, paying up to 18 percent more on average than non-trade jobs.

TPP will be good for our national security, too — increasing America’s presence in the fastest-growing region of the world and bolstering the economic vitality at home that underpins our military strength. Failure to get TPP over the finish line could relegate us to a future where we sit on the sidelines, letting China write rules with lower standards that diminish our relevance in Asia.

America is stronger, at home and abroad, when we write the rules; when our workers compete on a level playing field; and when our iconic products and services are more easily sold to the 95 percent of potential customers who live outside our borders. That’s what TPP does. It levels the playing field for American workers. And when American workers can compete fairly, we win.

A modern TPA will help the President get this done. That’s the first reason a modern TPA matters so much.

The second reason is that it holds future Administrations to the higher standards President Obama has placed at the center of the current negotiations.

Today’s bill, for the first time, reflects the bipartisan agreement on May 10, 2007 — spearheaded by House Democrats, led by Speaker Nancy Pelosi as well as Congressmen Charlie Rangel and Sandy Levin — that included groundbreaking provisions concerning the protection of labor, the environment, and intellectual property rights. The TPA legislation in Congress will require future Administrations to take up the mantle of labor and environmental protections that the Obama administration is fighting for.

No trade negotiating authority law has ever enshrined the high standards the President has been championing. We now have the opportunity to change that.

The new bill also updates how we deal with issues we could hardly have contemplated at the turn of the century. The last update to negotiation authority predates much of the explosion of activity on the Internet and the emergence of the digital economy. Facebook and Twitter did not even exist, the iPod was brand new, and most Americans were logging onto the web through a dial-up connection or had no connectivity at all. And it didn’t address emerging issues affecting our ability to compete in the global economy, such as leveling the playing field between state-owned enterprises and our private firms. The new TPA bill does that.

So, today’s bill helps us move forward on trade in a smart, transparent way by:

Here’s the bottom line: 95 percent of the world’s consumers live outside of our borders. We can’t afford to close ourselves off from those opportunities. A 21st century TPA is America’s chance to modernize our trade policy by locking in our progressive values and putting American workers first. We look forward to working with Congress to pass this bipartisan bill.