A new era of U.S. engagement in the Americas

When the President participated in his first Summit of the Americas six years ago, he promised to foster an era of cooperation between the U.S. and the region as equal partners, based on mutual interest and mutual respect. After six years of expanded engagement and stronger economic and cultural ties, the President has made good on his commitment.

We are in a new chapter in our relationship with the Americas. The evidence of stronger engagement is everywhere – in the number of high-level trips and visits to the region, our rising trade, and investment figures, and in the way we engage our regional partners on global issues like climate change and increased educational opportunities for young people.

This is the message that President Obama brought to the 7th Summit of the Americas, highlighting the significant progress including the new policy towards Cuba representing a turning point for our entire region. At the Summit, President Obama met with President Castro – the first meeting between the two nations after more than 50 years of a policy of isolation – to discuss ways to address our future together. President Obama focused on ways to promote greater opportunity for the Cuban people and our continuing work towards reestablishing diplomatic relations. President Obama and President Castro acknowledged that while our governments continue to have differences, we can continue to make progress towards our mutual interest of greater opportunity and prosperity for all our people. 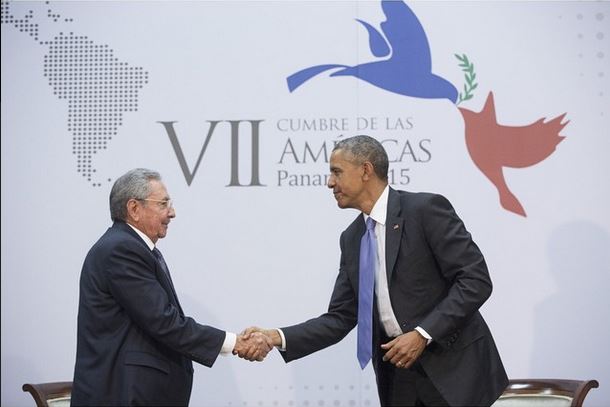 The President also met with the leaders of the Central America Integration System (SICA) to discuss ways to pursue economic integration and growth, violence prevention, transparency and good governance in Central America. He reiterated his commitment to working with Congress to secure $1 billion to support the US strategy for greater security and prosperity in Central America as a way to address factors that contribute to significant immigration from the region.

At the Summit, President Obama also met with Brazilian President Rousseff. As two of the world’s largest democracies, the leaders discussed a vast array of issues such as climate change, energy, defense cooperation, U.N. peacekeeping, and education. President Obama announced that Rousseff will visit Washington on June 30th, which will provide an important opportunity to further strengthen the strategic nature of our partnership. In his meeting with Colombian President Santos, both leaders expressed their appreciation for the level of commitment and cooperation between the U.S. and Colombia in the fields of security, technology, education, and particularly the support of the U.S. during the on-going peace talks, through a U.S. special envoy.

The United States is focused on an inclusive, opportunity-based agenda in the Americas. Prior to arriving in Panama, President Obama visited Jamaica where he announced the Young Leaders of the Americas Initiative (YLAI) This initiative will help young entrepreneurs and civil society leaders across the entire region access the training and the resources and connections they need to start new ventures, including the small businesses that create jobs.

The 2015 Summit of the Americas demonstrated the global importance of the region and the progress we have made over the last two decades to improve people’s lives. In this new chapter of engagement with the Americas, our region’s leaders must continue to work together, focusing on pressing issues that need our attention and action, so that we redouble our commitment to a more prosperous, safe, sustainable, equal, and democratic Western Hemisphere.