From "Forrest Gump" to "Star Wars": 10 Times National Parks Played a Role in Your Favorite Movies

April 24, 2015 at 11:05 AM ET by Miranda Houchins
Twitter Facebook Email
Summary:
In honor of National Parks Week, here are 10 National Parks that served as sets in some big blockbuster movies.

There is a long list of Hollywood greats who have acted on the nation’s outdoor stage. From far-away galaxies to jurassic jungles to the rustic Wild West, our epic American landscapes have played just about every role imaginable.

Featured in: Butch Cassidy and the Sundance Kid 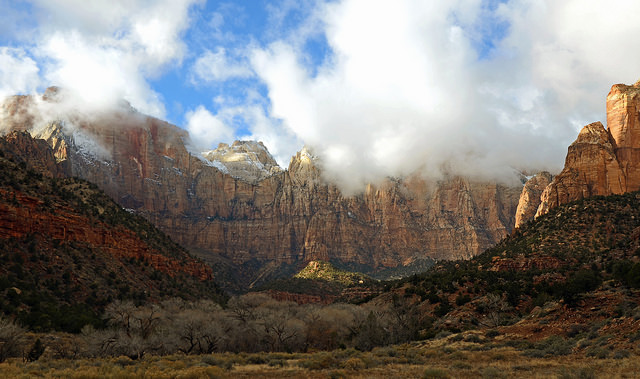 A young Paul Newman and Robert Redford star in a classic western about two bank- and train-robbing bandits. Much of the stunning natural scenery featured comes courtesy of Utah’s 229-square-mile Zion National Park.

According to Death Valley National Park, while many of the shots for A New Hope were taken abroad, the 1977 Star Wars film crew and George Lucas came to Death Valley to film some short transition scenes. Filler shots were taken at Mesquite Flat Sand Dunes, Desolation Canyon, Golden Canyon, Dante’s View, and Artist’s Palette.

The scene where the Jawas come to take R2-D2 to the sandcrawler was filmed at Artist’s Palette and needed actors. A number of small children from the Death Valley Elementary School were chosen for this role. These children were Park Rangers’ kids who lived in Death Valley National Park. They wore heavy costumes made out of burlap, and one got to wear a mask with glowing eyes. Tim Donaldson who lived with his family in the park during the filming shared a photograph of himself dressed as a Jawa:

3. Phone home, or visit the Ewoks at Redwood National Park.

Featured in: E.T. the Extra-Terrestrial, The Lost World: Jurassic Park, The Rise of the Planet of the Apes, and Star Wars Episode VI: Return of the Jedi 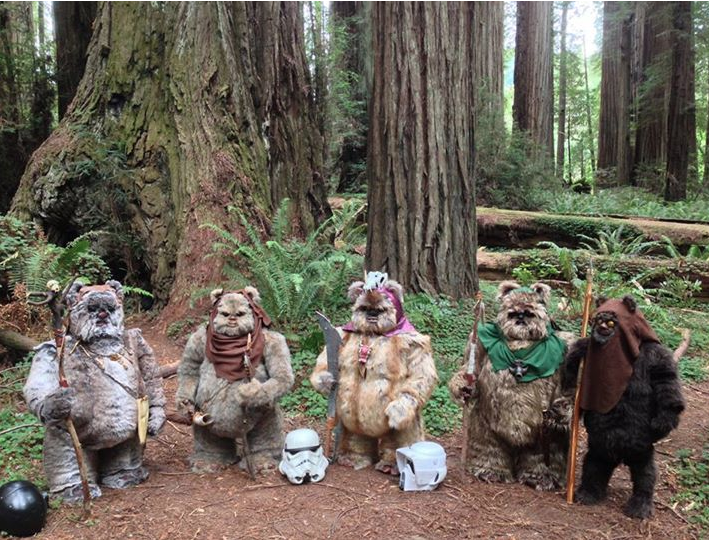 Movies of the Redwoods https://t.co/H23tWrOkf9 Ranger Chris explores how filmmakers sought inspiration in #Nationalparks for decades.

4. Go on an Indiana Jones Adventure at Arches National Park.

Featured in: Indiana Jones and the Last Crusade

Featured in: Forrest Gump and The Shining 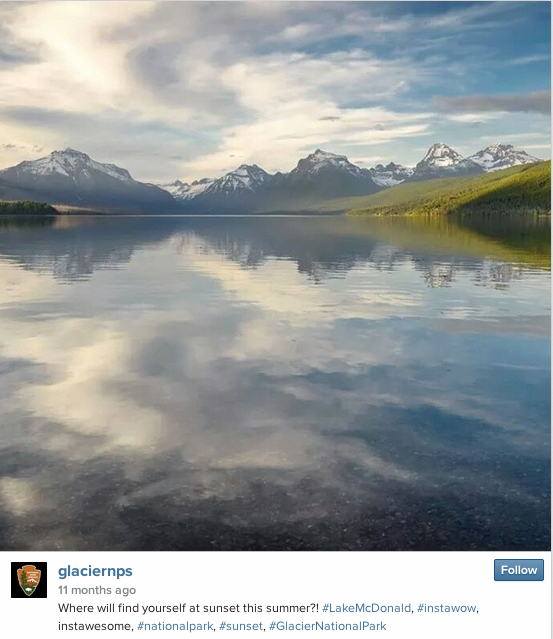 This road is seen briefly in the film Forrest Gump. Forrest Gump jogged through Montana on his trek across the United States and back. As Forrest reminisces with Jenny, he remembers running across the U.S. and remarks, "Like that mountain lake. It was so clear, Jenny. It looks like there were two skies, one on top of the other." The shots in the background are Going-to-the-Sun Road and Saint Mary Lake.

Going-to-the-Sun Road is the only road that crosses Glacier National Park and is noted as one of the first National Park Service projects specifically intended to accommodate the automobile-borne tourist. The road, a National Historic Landmark and a Historic Civil Engineering Landmark, spans 50 miles across the width of the park.

This road is also shown in the opening credits of the 1980 film The Shining, as Jack Torrance's Volkswagen glides past Saint Mary Lake.

Featured in: Planet of the Apes, Charlie’s Angels: Full Throttle, Gravity, and the TV series, Dr. Who

The Grand Teton National Park in Wyoming stands in for the icy "Russian" wilderness where Rocky trains.

Featured in: Dances with Wolves

The wagon ride from ‘Fort Hayes’ to ‘Fort Sedgewick’ was filmed in the Sage Creek Wilderness Area of Badlands National Park.

In the modern take on the Lone Ranger, Johnny Depp (Tonto) and Armie Hammer (the masked hero) journey throughout the rugged western lands of Utah, Arizona, and New Mexico. While much of the movie was filmed in and around the spectacular sites of Canyonlands National Park, the film crew also headed to Arizona's Canyon de Chelly National Monument for a few scenes.

May the odds be ever in your favor at Dupont State Recreational Forest.

Brevard’s Dupont State Forest became ideal for photo-ops as it's one of the most recognizable locations in the first Hunger Games film. The Hunger Games are set in the dystopian future, which requires two young representatives from each of the 12 districts to participate in a fight to the death.

Many scenes that take place inside the game’s arena were filmed against the woodlands and its impressive waterfalls. Today, Triple Falls has become one of the most visited areas inside Dupont State Recreational Forest for Katness cosplayers and Hunger Games nature tours. 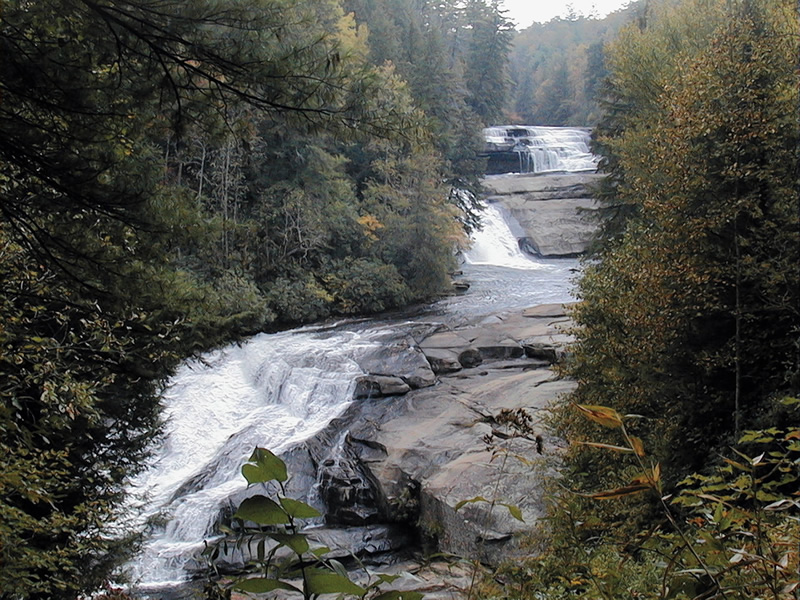 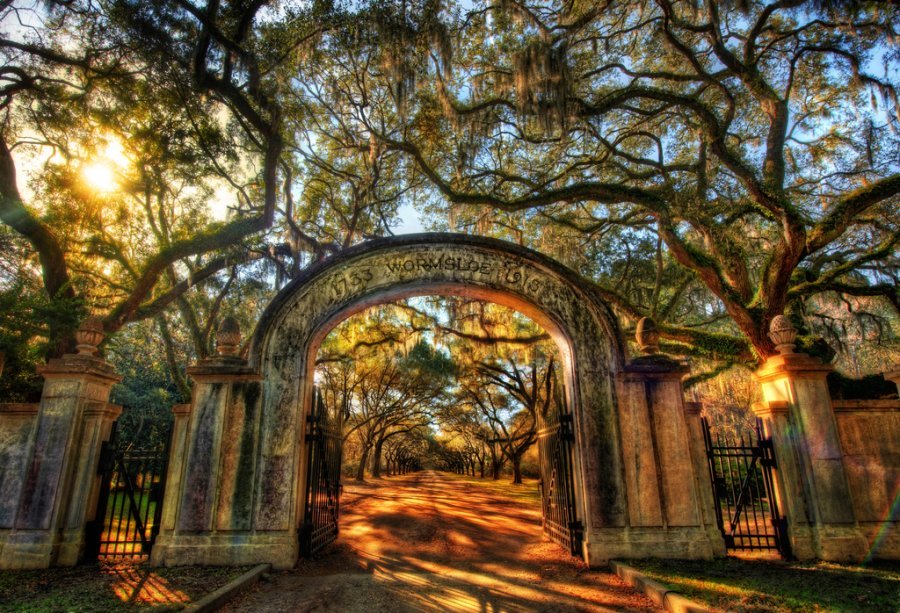 Featured in: The Last Song

2010's tearjerker "The Last Song," starring Miley Cyrus and Liam Hemsworth, was filmed primarily on Tybee Island and in nearby Savannah, Georgia. When Ronnie (Miley Cyrus) goes to the home of Will (Liam Hemsworth) and his family for the first time, they cruise down Oak Drive at Wormsloe Historic Site, which is regulated by Georgia's Park Service.

Want to know if a park near you had any starring roles? Check out a larger list of movies filmed at National Parks here.