April 21, 2015 at 6:01 PM ET by Cecilia Muñoz
Twitter Facebook Email
Summary:
At last, the doctors who care for seniors and many Americans with disabilities will no longer have to worry that about the possibility of an arbitrary cut in their pay.

Today, the President will celebrate the overwhelmingly bipartisan law that was enacted last week, the Medicare Access and CHIP Reauthorization Act.  This law strengthens Medicare, extends the Children’s Health Insurance Program (CHIP), and makes numerous other improvements to the health care system. With 392 votes in the House and 92 votes in the Senate, this law proves that we can come together to solve problems.

At last, the doctors who care for seniors and many Americans with disabilities will no longer have to worry that about the possibility of an arbitrary cut in their pay. And, Medicare’s beneficiaries won’t have to worry that this formula will jeopardize their ability to see a provider. The flawed Medicare payment system created 17 potentially deep cuts in the last 13 years – with 5 alone in 2010 (Figure 1). This law eliminates the risk of these steep cuts and ensures that doctors will be paid in full for the care they give. 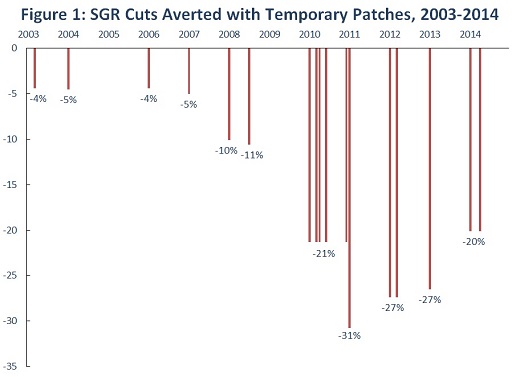 Moreover, the new law helps orient Medicare’s physician payment system toward rewarding the quality of the care they give a patient rather than just the number of tests and procedures they do for a patient. The Actuaries at the Center for Medicare and Medicaid Services (CMS) estimate that the percent of Medicare physician payments in payment models that encourage higher quality care would more than double in four years, from 25 percent this year to 60 percent in 2019 as a result of this law. The rapid deployment of these types of alternative payment models will be an important step  toward the Administration’s goal of creating a health care system that achieves better care, smarter spending, and healthier people. In addition, the law helps doctors improve their practice by increasing Medicare’s ability to share privacy-protected data with clinicians.

The law also extends CHIP, which has provided meaningful health coverage to over eight million children. This program has helped cut the uninsured rate among children by nearly 60 percent since its start in 1997 – with more than one-quarter of that reduction since the President signed  legislation reauthorizing the program in 2009 (Figure 2). The law also continues the proven Maternal, Infant, and Early Childhood Home Visiting Programs, protects access to care through Community Health Centers, extends the National Health Service Corps and Teaching Health Center funding, makes permanent a program to assist low-income individuals with their Medicare premiums,  and will help to better protect beneficiaries’ personal information, in addition to making progress on many  other priorities. Many of these policies were proposed in the President’s Fiscal Year 2016 Budget. 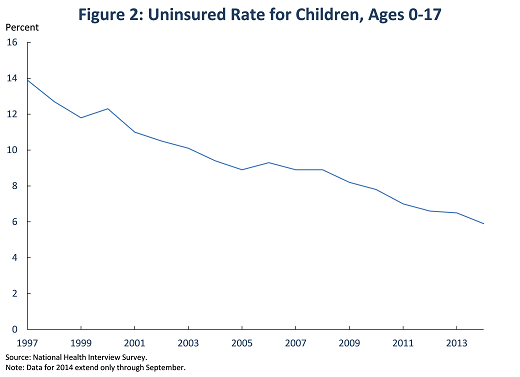 The important reforms in this legislation build on the progress we have made since the passage of the Affordable Care Act just over five years ago.  Since 2010, health care prices have risen at the slowest rate in nearly 50 years. Health care quality has improved, with an estimated 50,000 fewer patient deaths in hospitals due to avoidable harms like infections or medication errors. And, over those five years, more than 16 million Americans have gained health insurance coverage, driving the nation’s uninsured rate to its lowest level ever.

As the President said at its signing, "this is good stuff."