The White House launched the Climate Action Champions program in late 2014, in partnership with the U.S. Department of Energy. After a competitive application process, the Department of Energy designated 16 communities as Climate Action Champions, including two tribes: the Sault Ste. Marie Tribe of Chippewa Indians (Michigan) and the Blue Lake Rancheria Tribe (California).  These tribes were selected for their local leadership in climate mitigation and adaptation.

Native American communities have a long history of determination and hard work to maintain their cultural and economic resilience.  As it turns out, these same traits are needed for climate resilience. Traditional strengths of tribal communities’ include local self-reliance, environmental stewardship that respects the carrying capacity of the land, and strengthening community. These strengths are now valued attributes for coping with current and future changes.

The Sault Tribe is the largest native tribe east of the Mississippi River. It constitutes one of four Tribes and First Nations that form the Anishnabek community of the rapids of the St. Mary’s River.

The Sault Tribe is guided by the Seven Grandfather Teachings (Love, Wisdom, Bravery, Truth, Honesty, Respect, and Humility) in its leadership and community development. Responding to the threats presented by a changing climate, in particular, requires ‘Aak wade ‘ewin’ – Bravery - in facing the changes that will be coming to our children and grandchildren.   As tribal chairperson Aaron Payment said, “We are part of the ecological system.  It is an illusion to think we have dominion over our Aki [earth].”

The Sault Tribe has developed several strategic level plans to mitigate and adapt to climate change.  The Energy Strategy (2012), in particular, calls for a strategic approach in several areas, including: demanding reduction in all energy uses, installing renewables sized and located to best meet demand, reducing reliance on the grid infrastructure and reducing vulnerability to catastrophic events. All available renewable options will be utilized and distributed across the demand centers of the seven counties to increase resilience of supply. The long term goals are to produce power from renewables to supply all power needs of the Tribe, export to the grid to offset all purchased energy (including transportation energy), and be a net-zero greenhouse gas emitter. Mother Earth demands this of us and we feel strongly that this is the right thing to do.

The Sault Tribe’s Energy Strategy has a bold long-term goal:  “No Net Purchased Energy.” This means that for any energy the Tribe must purchase for its operations (including vehicles and flights), an equivalent amount of energy will be produced for export to the grid for other users. The staged approach that is detailed in this Strategy first calls for aggressive measures to reduce energy consumption before taking broad scale action with renewable energy. Planned efforts in the next three years include demand reductions of 4% per year.

The Sault Tribe has taken a leadership role in negotiating the groundbreaking Michigan State/Tribal Climate Accord, an agreement that sets out collaboration and consultation between the state of Michigan and the twelve tribes within its borders. The Tribe is also a leader and signatory to a treaty with the three other Tribes and First Nations bordering on the St. Mary’s River and the international border. This treaty calls for the formation of an Aboriginal Joint Commission to work toward the long term sustainability of the St. Mary’s River ecosystem. We believe this is the first such treaty and Commission of its kind.

We are a resilient people. We are committed to combatting the local impacts of climate change, and are proud to have been recognized as a Climate Action Champion. While there is still great progress to be made, we hope that our leadership will help other tribes and communities to deliver local climate action.

Some of the Sault Tribe’s achievements in climate mitigation and Adaptation to date include:

The Tribe, its government, elected leaders, and staff have made significant progress implementing greenhouse gas (GHG) reduction measures while improving community resiliency. Since 2008, the Tribe has been focused on strategic climate action planning and implementation of a wide range of projects that work in concert to reduce GHGs and improve community and regional security.

The overall strategy consists of maximizing energy efficiency, and in parallel, implementing energy resiliency measures. Such measures include onsite back-up generation and emergency power, transitioning from fossil to renewable energy to ultimately achieve 100% renewable energy use on the Rancheria, zero net GHG emissions, and actions to ensure operations for critical infrastructure and resource security for  business-as-usual and short- and long-term emergency situations.

The following are just a few of the illustrative climate mitigation and adaptation actions that the Blue Lake Rancheria Tribe has achieved since 2011: 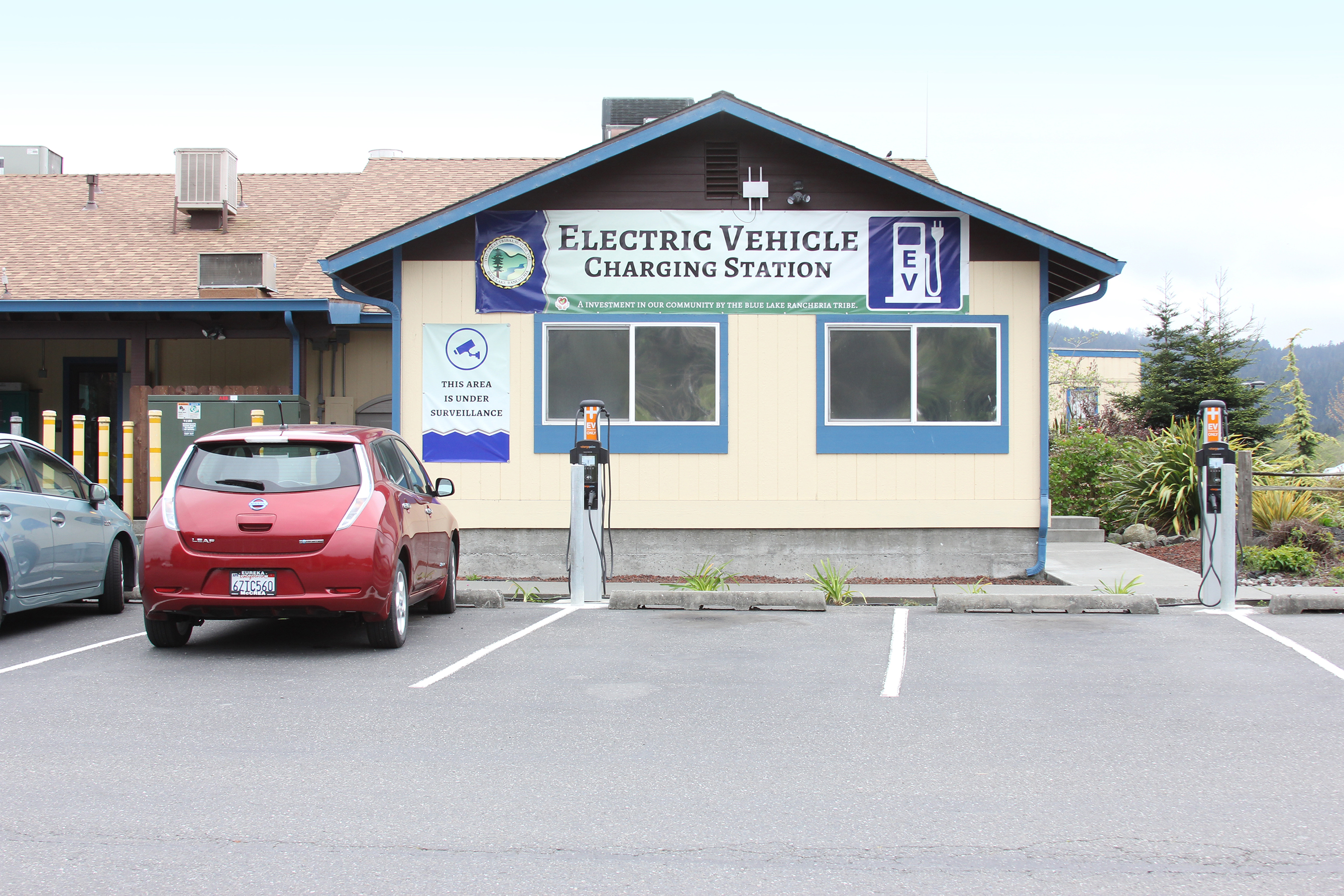 The Tribe has a particular focus on transition to green fuels. Partnering with Humboldt State University engineering students on feasibility, the Tribe found that biodiesel manufacturing had environmental and economic benefit. For example, using waste oil from its own commercial kitchens, the Tribe fueled its public transit buses. The transit program saved thousands per year and achieved significant GHG reductions even with a 20% biodiesel blend. Fully operational now, bus performance has also been excellent – gas mileage has remained the same and the engines are running smoothly. The other primary fuel-switching project to date has been transitioning the tribal fleet to electric vehicles and installing two Level 2 electric vehicle charging stations. The Tribe ultimately seeks to power both the biodiesel plant and the electric vehicle charging stations with renewable energy produced onsite. 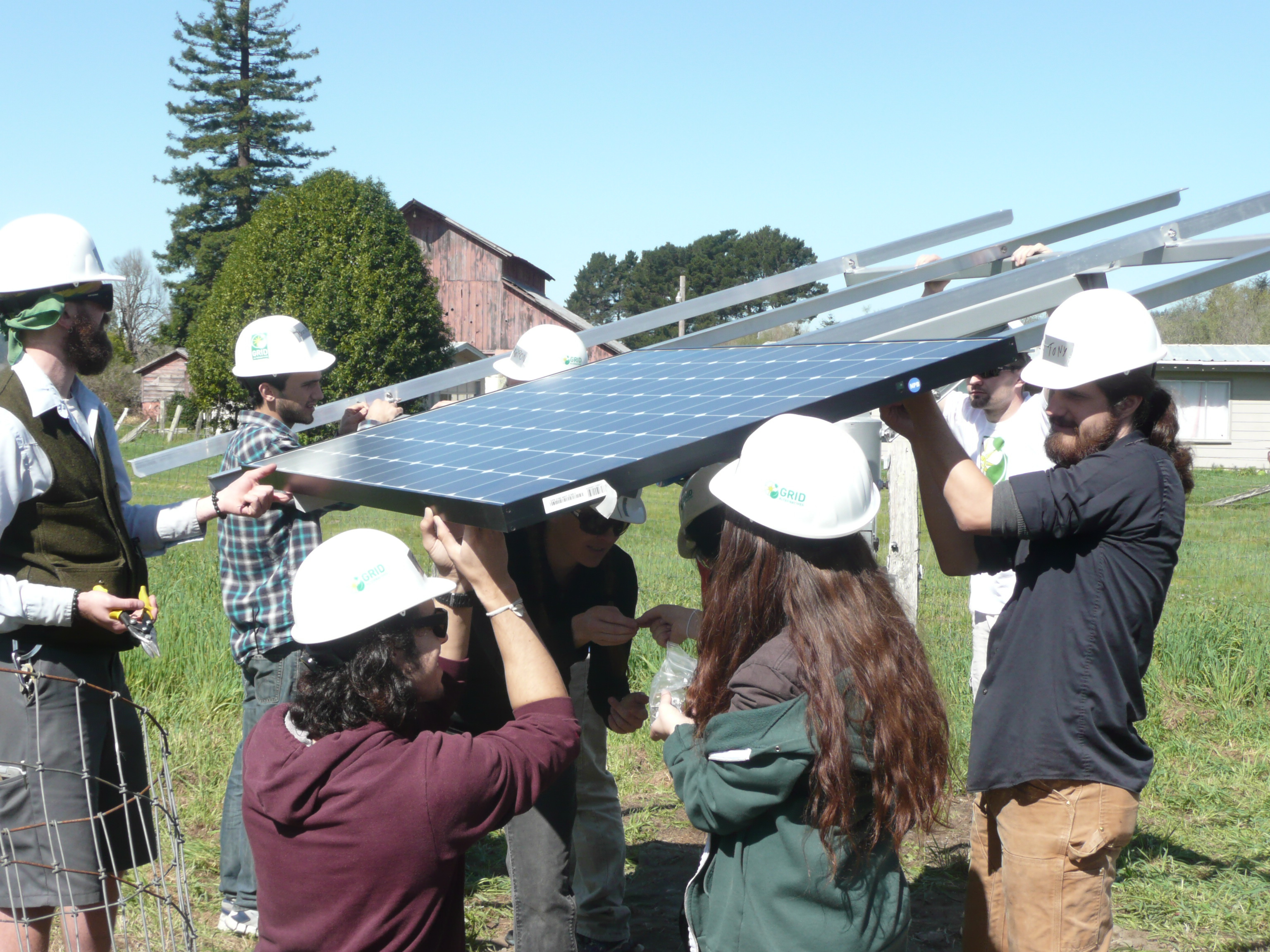 The hope of utilizing solar and microgrid will become a reality in the next two years as the Tribe implements a ~.5 MW solar array and a microgrid control system. Estimated to be complete in 2017, the Tribe’s microgrid will provide for greater demand response and peak shaving in a business-as-usual mode. In emergency situations, the microgrid will operate in islanded mode, separate from the grid, and allow the Tribe to provide the region with emergency power for as long as it is needed.

The Tribe’s partnerships at the local, regional, state and national level are the most important component of the Tribe’s ability to carry so many projects forward in a relatively short time. The local expertise in engineering and environment at Humboldt State University, the Schatz Energy Research Center, and the Redwood Coast Energy Authority have been the primary determining factor in the success of the Tribe’s energy efficiency, renewable energy, and green fuels projects. On the state level, the California Energy Commission, Pacific Gas & Electric utility, and individual project partners such as GRID Alternatives have provided outstanding strategic funding and operational assistance. On the national level, the U.S. Department of Energy, Office of Indian Energy Policy and Programs, U.S. Department of Interior, Bureau of Indian Affairs, U.S. Department of Agriculture Rural Development, and other important agencies such as the National Oceanic and Atmospheric Administration, U.S. Environmental Protection Agency, and the U.S. Department of Transportation - among many others - have provided significant and ongoing support and guidance. Lastly, the Tribe has been fortunate in its public/private partnerships as well, with several private technology partners who have contributed financially, technically, and operationally to various projects.

The Climate Action Champion recognition is a true honor, and the Blue Lake Rancheria Tribe hopes that by sharing some of its work, it will generate ideas and projects in other small communities.  As Vice Chairperson Arla Ramsey commented, “The Tribe hopes to serve as an example that a very great amount of climate action can be done, in a very short time, by making best use of limited resources.”

We hope, on this beautiful Earth Day, that our work (and the work of our respective tribal governments, our fellow Climate Action Champions, and everyone who is working toward a stable planet) shines light on what actions are possible – right now – to fight climate change and deal with the impacts that are already here. We wish you a very good Earth Day.