April 23, 2015 at 3:50 PM ET by Katy Kale
Twitter Facebook Email
Summary:
For the 10th year, the White House participated in “Take Our Daughters and Sons to Work Day.” In order to give more kids an opportunity to grow and broaden their horizons, the White House expanded its program this year to include children from the Boys and Girls Club of Greater Washington and the D.C. Child and Family Services Agency. 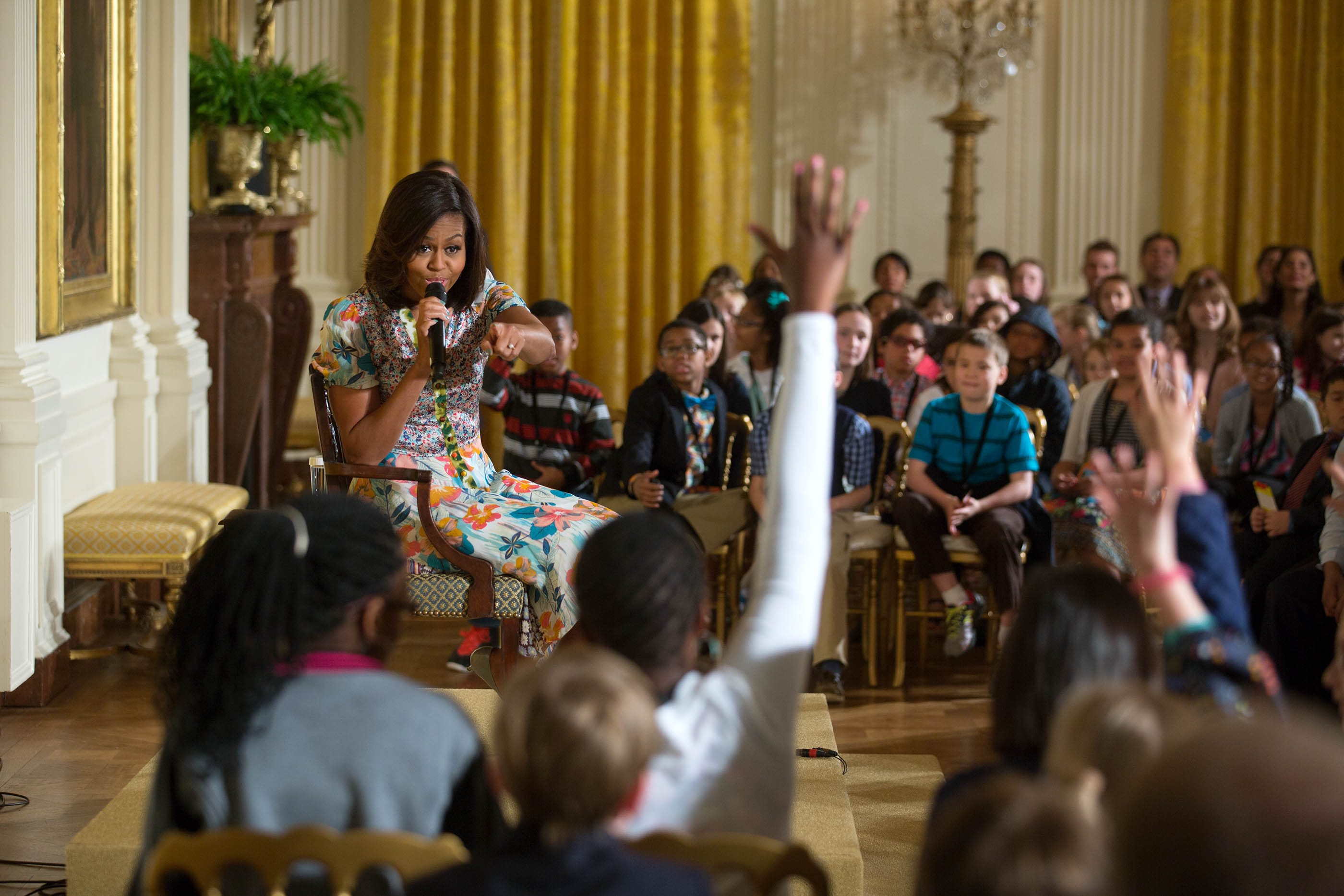 First Lady Michelle Obama takes questions during the annual "Take Our Daughters and Sons to Work Day" event in the East Room of the White House, April 22, 2015. The First Lady met with children of Executive Office employees, and local young people from the Boys and Girls Club and D.C. Child and Family Services. (Official White House Photo by Lawrence Jackson)

Yesterday marked the 10th year that the White House has participated in “Take Our Daughters and Sons to Work Day.” This year, in order to give more kids an opportunity to grow and broaden their horizons, the White House expanded its program beyond the children of Executive Office of the President staff to include children from the Boys and Girls Club of Greater Washington and the D.C. Child and Family Services Agency.

In keeping with this year’s theme, “Empowering Young Minds at the White House,” the programming was shaped around STEM education, the arts, and career exploration. Approximately 200 children began their day today by taking the Oath of Office, just as the President and all of his staff do. Following their oath, the children spent time in a variety of different activity stations including: a presentation from NASA; photo captioning with the White House Photo Office; creating circuits with stickers with the Office of Science and Technology Policy; printing on a 3D printer; and taste testing healthy cupcakes made by the White House Pastry Chefs. With the Japanese State Dinner right around the corner, the children also learned how to make origami frogs.

The highlight of the morning came when the First Lady spoke with the children and answered some of their questions. The children asked the First Lady who inspires her, what animal she would want as a pet, and what her favorite trip has been as First Lady:

The First Lady was introduced by Amnoni Myers, an inspiring young White House Intern who grew up in the foster care system, having been a ward of the state since she was born. A Boston native, Amnoni is a strong advocate for foster children, and helped to coordinate the inclusion of foster youth in this year’s event. 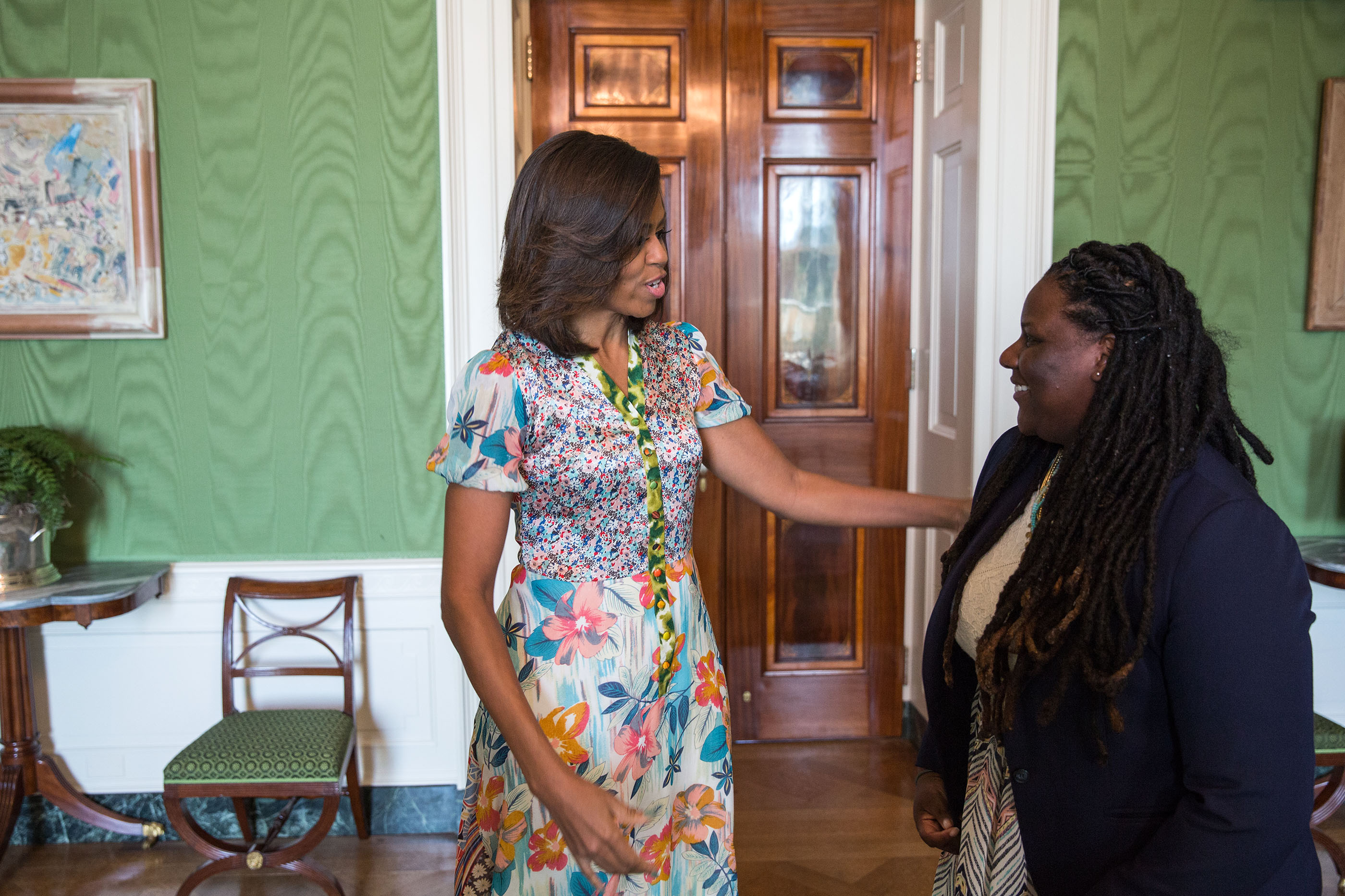 If your organization is interested in expanding your Take Our Daughters and Sons to Work Day event, please encourage them to reach out to local schools and youth-serving organizations as partners. If your employer has already expanded its activities, please tweet us a photo using the hashtag #DaughtersAndSons to show us what you did to inspire children in your community who wouldn’t otherwise have had this opportunity.

Watch President Obama speak about the importance of expanding Take Our Daughters and Sons to Work Day:

See more photos from this year's White House event below:

I expect great things from you, Leema & Tyron! Thx for joining us on Take Our #DaughtersAndSons to Work Day! @DCCFSA pic.twitter.com/Y9RjEykEYD

We’re so proud of you, Zaire and Janiah! Thanks for joining us on Take Our #DaughtersAndSons to Work Day! @BGCGW pic.twitter.com/gXpw52r6Ub

Proud to have met an inspiring 11 year old - Paris and I during Take Our #daughtersandsons to Work day. Thx @DCCFSA ! pic.twitter.com/BdfmQxn1hp

Thank you, @DCCFSA! Our team had a great time meeting Jehrylle as part of Take Our #DaughterAndSons to Work Day pic.twitter.com/L0ixoBBUWA

Jo Handelsman & 9-yr-old Kayla talk about what it's like being a scientist at the White House #DaughtersAndSons #STEM pic.twitter.com/sk62FkHrOr

What a great #DaughtersAndSons day! Meet Aaron, who crushed one of my deputies on the bball court (well done)! @BGCGW pic.twitter.com/F5FHjN8brT

And Phillip, our team was thrilled to meet you! @DCCFSA Thanks again to everyone who hosted: https://t.co/QEskWwWU5a pic.twitter.com/FQ5Wz9hAWG