Asked and Answered: Josie on the Importance of Protecting the Everglades

This is the latest post in our "Asked and Answered" series, in which we periodically feature an exchange between the President -- or a Senior Administration Official -- and an American who wrote him. Check back soon for more -- and if you'd like to write the President yourself, you can do so here.

Every day, the White House receives thousands of letters and emails from Americans across the country. I work in the Office of Presidential Correspondence, and our job is to sort and read through all of those messages, and make sure they get to the right people for responses. Sometimes, letters to the President are shared with his Senior Advisors, either by the President or directly from our office.

In the spirit of Earth Day, we've been reviewing and sharing letters from Americans speaking out about climate change and the importance of preserving our nation's beautiful natural places, and we came across Josie's note from May 2013. While a student at Globe University in Wisconsin, Josie wrote us about the importance of preserving and protecting the Florida Everglades, where she and her family would often vacation when she was a child. That's something the President agrees with wholeheartedly, which is exactly why he headed to this very region this week to take a tour and deliver remarks.

So Senior Advisor to the President Brian Deese, whose duties include overseeing climate, conservation, and energy policy, decided to send an additional reply to Josie. He let Josie know that we agree with her, and shared some of the actions the President has taken in the areas of conservation and preservation since Josie wrote us.

Here's the original letter Josie sent — give it a read, and if you've got a place of your own that you're fighting to preserve, share it with us here. 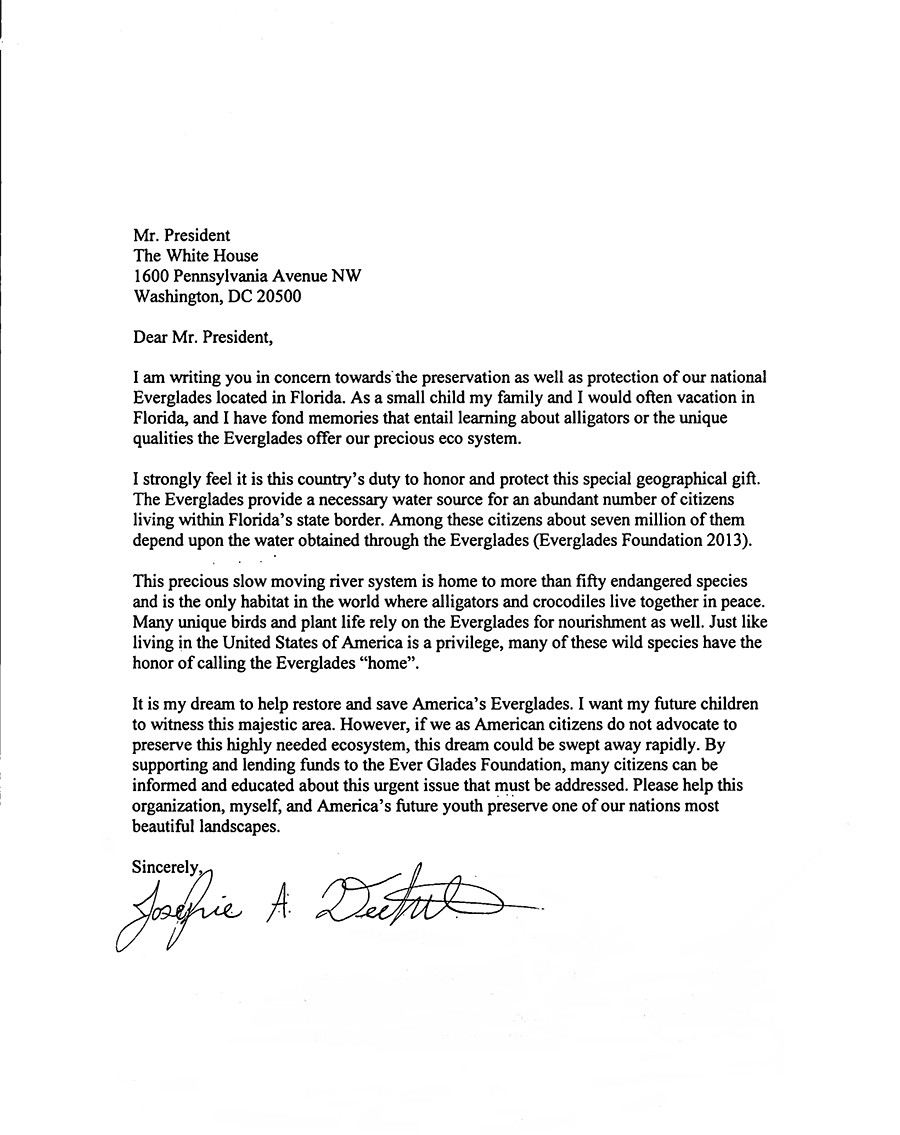 Here's the response Brian wrote to her: 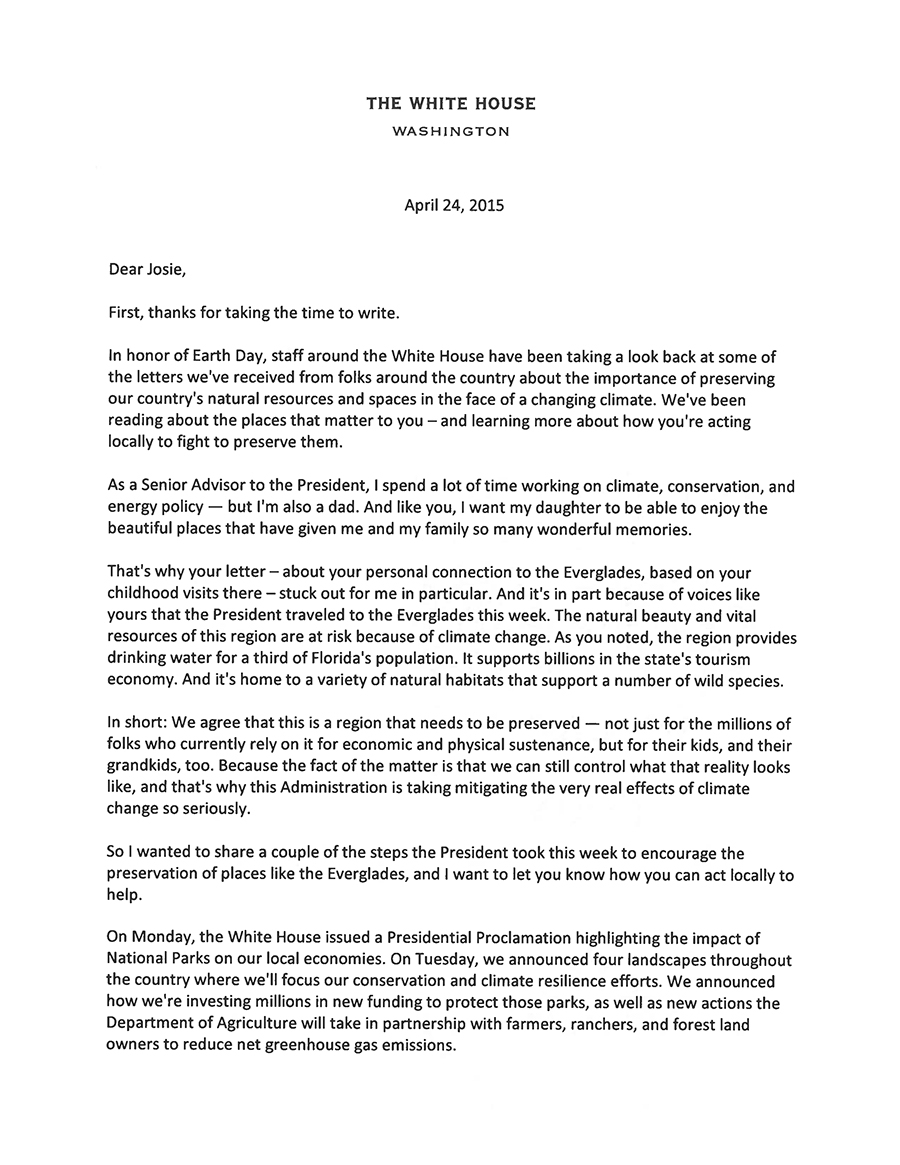 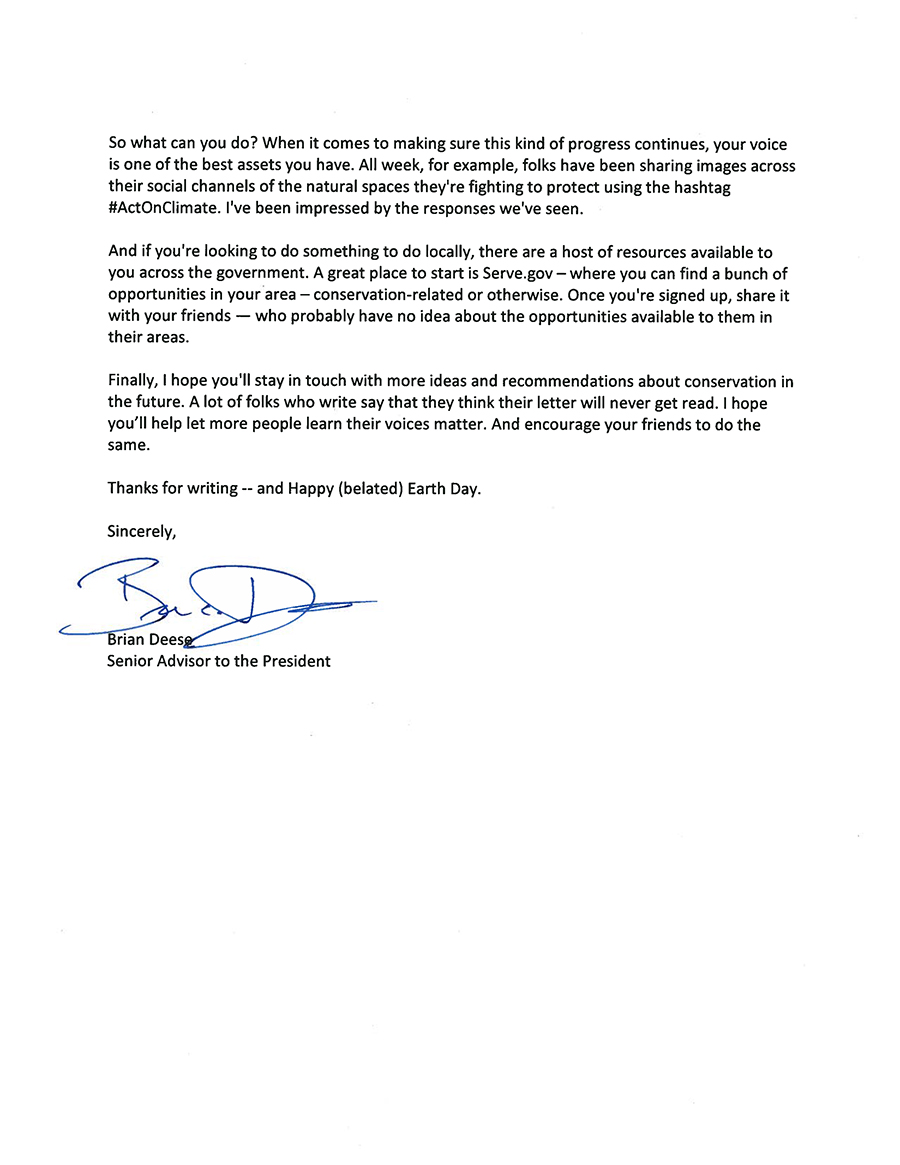 As Brian wrote to Americans around the country earlier this week, this Earth Day, the conversation has moved far beyond a debate about the existence of climate change. Today (and every day), we're focused on addressing its very real effects here at home, preparing our communities where its impacts are already being felt, and leading an international effort for action.

All week, across Twitter, Instagram, and Facebook, Americans have been standing up and sharing photos and stories about the natural places they feel personally connected to and invested in. Share yours using the hashtag #ActOnClimate, or send it our way here.

The voices of people across America inform the President and give him invaluable perspective on the progress we’ve made  —  as well as the work we’ve got left to do. If you want to write the President yourself, you can do that here.