The Land and Water Conservation Fund: Congress Must Act to Fulfill Commitment to Communities

April 24, 2015 at 3:36 PM ET by Christy Goldfuss
Twitter Facebook Email
Summary:
The Land and Water Conservation Fund has successfully protected, restored, and conserved countless natural lands across our country for 50 years. Now, it's time for Congress to act to reauthorize and fully fund this important program.

For 50 years, the Land and Water Conservation Fund has been one of the most popular and effective tools used to protect and restore special places like the Everglades. By reinvesting revenues from offshore oil and gas development, the Fund has made it easier for people to enjoy to the outdoors for hunting, fishing, and other recreation and protected iconic places like National Parks and Civil War battlefields. And, as Secretaries Vilsack and Jewell noted in an Earth Day op-ed, “the law has been regarded as one of the most successful programs for recreation and conservation investments in our history.”

But if Congress doesn’t act, the Land and Water Conservation Fund will expire in September.

That’s why, when President Obama visited Everglades National Park on Earth Day, he called on Congress to reauthorize and fully fund the Land and Water Conservation Fund. The Fund has supported our work to restore the natural water flow of the Everglades, and other important restoration and conservation efforts across the country. 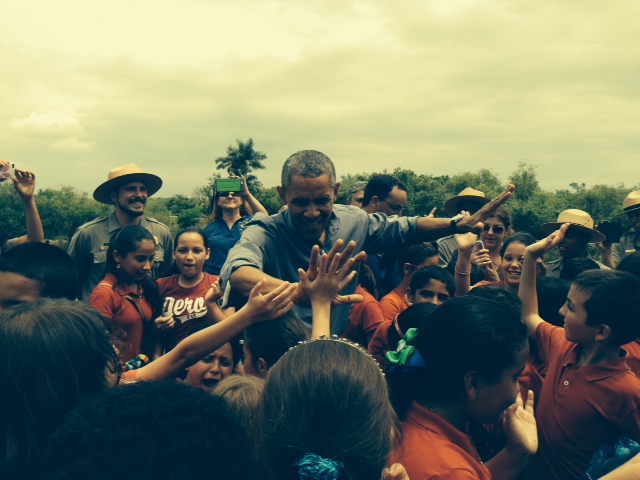 President Obama visits Everglades National Park on Earth Day 2015, where he called on Congress to fully fund the Land and Water Conservation Fund.

Just this week, the Department of the Interior announced that investments from the Fund would be used to enhance parks in eight cities’ underserved neighborhoods. Three million dollars in investments will be used to renovate damaged storm water systems, protect wildlife habitats, and provide outdoor education programs. These types of investments are critical for getting more young people connected to the outdoors.

And today, the U.S. Department of Agriculture announced that the Fund has been used to protect another treasured place: the historic Campbell property within the George Washington-Jefferson National Forest along the Appalachian National Scenic Trail. With support from the National Park Service, the Conservation Fund purchased the 317-acre property last year and conveyed it to the U.S. Forest Service. The new protections preserve portions of the Appalachian Trail and the Spy Rock scenic overlook, support unique wildlife habitats and ecosystems, and provide new access for hunting, fishing, and other outdoor recreational activities.

None of this would be possible without the Land and Water Conservation Fund.

Secretary Jewell hit the road earlier this month to make the case for full funding, talking with landowners, battlefield preservationists, wildlife biologists, and a variety of other leaders and citizens about how their communities benefit from the Fund.  At the Chattahoochee River National Recreation Area in Georgia, Atlanta, area residents enjoy hiking, biking, and other recreational activities along a beautiful stretch of the Chattahoochee River – all because of the Fund. And in 2014, visitors spent over $123 million and supported over 1,700 jobs – clear evidence that smart conservation efforts strengthen local economies. And the Fund can do even more to benefit the community. Secretary Jewell also visited the Appomattox Court House National Historic Park in Virginia, where she toured the site of some of the Civil War’s final battles. Here, the Land and Water Conservation Fund has been leveraged to expand the park and recently helped protect the area around McClean House – the site where, 150 years ago this week, the Civil War effectively ended with Robert E. Lee’s surrender. The Fund has preserved historically significant sites like this all over the country.

Though these two places are very different, the message she heard was the same: Americans want to see investments in the parks and public lands they love. They want to protect special places that celebrate our natural heritage and rich history, and they want to make sure more Americans have access to safe outdoor spaces and natural landscapes.

It’s time for Congress to honor the bipartisan commitment made over 50 years ago and ensure that our children and grandchildren get to enjoy America’s treasured outdoor spaces the same way we have.

Christy Goldfuss is Managing Director of the White House Council on Environmental Quality.