America’s Response to the Earthquake in Nepal: What We Can Do to Help

April 27, 2015 at 6:46 PM ET by Tanya Somanader
Twitter Facebook Email
Summary:
What you can do to help the people of Nepal in the aftermath of April 25th's devastating earthquake.

“To the people in Nepal and the region affected by this tragedy, we send our heartfelt sympathies. The United States stands with you during this difficult time.” — Secretary of State John Kerry

On April 25, 2015 — at 2:11 a.m. ET — an earthquake struck at the heart of Nepal, just 77 kilometers northwest of its capital city, Kathmandu. The earthquake’s magnitude registered at 7.8, followed by more than 20 aftershocks that ranged between 4.5 and 6.6 on the Richter scale. 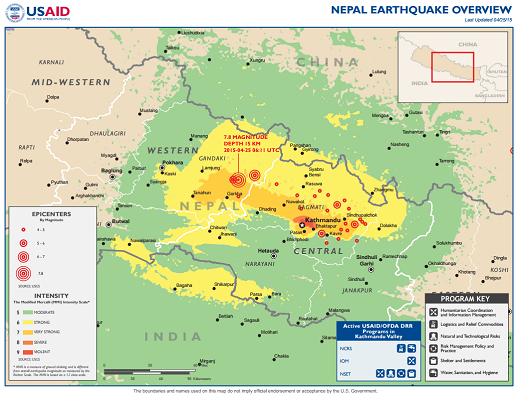 The earthquake toppled communities beyond Nepal’s border, as the shockwaves reached China, India, and Bangladesh. Thousands of people have lost their lives — and the casualty list will only continue to climb as rescue crews sift through the destruction of collapsed buildings, historic temples and landmarks, and hobbled public infrastructure. Tens of thousands of people are taking shelter in makeshift camps around the capital.

Facing such widespread and unexpected devastation, the people of Nepal and the region are struggling to endure such a calamity.

Here's what we're doing to help:

USAID is immediately deploying an Urban Search and Rescue Team to aid in rescue efforts, and a Disaster Assistance Response Team (DART) of regional and technical exports to identify and prioritize humanitarian needs. The U.S. is also providing an initial $10 million in emergency assistance for relief organizations in Nepal to further address urgent humanitarian needs.

These efforts build on nearly two decades of disaster risk reduction efforts in Nepal, which helped identify, prepare, and preserve more than 80 open spaces in Kathmandu Valley to ensure the sites are available to be used as distribution centers, warehouses, or for other humanitarian purposes. The Obama administration will continue to monitor the situation and work with the governments of the affected regions to assist in rescue and recovery.

Here's what you can do to help:

6.6 million people live within 100 kilometers of the earthquake’s epicenter. The most effective way you can help is to make a monetary donation to a credible humanitarian organization that is working in the disaster zone, such as Doctors Without Borders or the American Red Cross.

Here’s why: Monetary donations give aid professionals the flexibility to procure the exact items people need, to reduce the burden of scarce resources like transportation routes or warehouse space, and to support the economy of the disaster-stricken region.

Click here for a list of organizations you can work with to help respond to the earthquake in Nepal: http://www.usaid.gov/nepal-earthquake