April 29, 2015 at 10:35 AM ET by Greg Nelson
Twitter Facebook Email
Summary:
When it comes to the Trans-Pacific Partnership, President Obama has taken important steps to increase transparency of trade negotiations.

Every comma, every period, every semicolon.

When it comes to the Trans-Pacific Partnership, President Obama has taken important steps to include new voices and increase the transparency of our trade negotiations. From soliciting input from groups traditionally left out of negotiations like labor and environmental groups to supporting new provisions that require months of public review before a deal is signed, the Administration is committed to ensuring the maximum possible transparency throughout the negotiations.

In an interview with the Wall Street Journal, the President laid out what the public can expect to see before he signs an agreement and well before any vote is taken in Congress:

President Obama to the @WSJ on how he's ensuring transparency in trade negotiations. #LeadOnTrade #TPP https://t.co/r9BhubwxDk

"There are going to be many months in which people will be able to look at every comma and period and semicolon in this deal. And I feel very confident that when people evaluate the actual deal that is done, that they will see that, in fact, it is the most progressive trade deal in history." -- President Obama

Since negotiations began, the Administration has:

In addition, the Obama administration has brought diverse voices into the process of advising our trade negotiators: 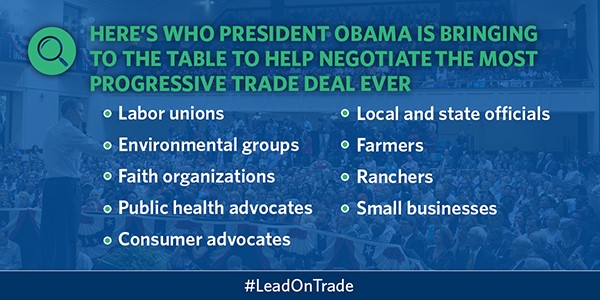 There is no agreement yet on TPP and no final text to review. Negotiations are still ongoing. So what we haven’t done – and what we shouldn’t do – is publicly announce our bottom-lines in those negotiations to negotiators on the other side of the table. And there’s a very good reason we won’t do that: We’re trying to drive a hard bargain so the American people get the best deal possible. We can’t do that if we show the other players our cards, so to speak.

The President is committed to a process that solicits input and enshrines American values in our trade policy. When it comes to free and fair trade, that’s his bottom line.