Advance Estimate of GDP for the First Quarter of 2015

April 29, 2015 at 9:30 AM ET by Jason Furman
Twitter Facebook Email
Summary:
Economic growth in the first quarter was restrained by factors including tepid foreign demand and harsh winter weather. At the same time, households saved most of their gains from low energy prices, Over the past four quarters, the most persistent and stable components of GDP — consumption and fixed investment — have grown 3.3 percent. This trend complements the strong pace of job growth and unemployment reduction over the last year.

Economic growth in the first quarter was restrained by factors including tepid foreign demand and harsh winter weather. At the same time, households saved most of their gains from low energy prices, Over the past four quarters, the most persistent and stable components of GDP — consumption and fixed investment — have grown 3.3 percent. This trend complements the strong pace of job growth and unemployment reduction over the last year. This report underscores that the U.S. economy is directly affected by the global economy, making clear the importance of advancing Trade Promotion Authority in Congress so the President can take further steps to open up markets abroad to increase U.S. exports and expand opportunities for the middle class. In addition, we could further solidify the positive trends in the domestic economy by expanding investments in infrastructure and ensuring the sequester does not return in the next fiscal year as outlined in the President’s FY2016 Budget.

1. Real gross domestic product (GDP) grew 0.2 percent at an annual rate in the first quarter of 2015, according to the advance estimate from the Bureau of Economic Analysis. The report, which was likely affected by notably harsh winter weather in the first quarter (see point 2), reflects a slowdown in personal consumption as well as declines in fixed investment and net exports — as U.S. exports continue to be restrained by the global growth slowdown (see point 4). Indeed, the decline in net exports subtracted more than a full percentage point from quarterly GDP growth. Another major contributor to the slowdown was declining investment in mining exploration, shafts, and wells — likely reflecting the response to the sharp decline in oil prices — that subtracted more than half a percentage point from quarterly growth. Four-quarter growth of real GDP rose to 3.0 percent as the 2014-Q1 decline dropped out of the four-quarter moving average. 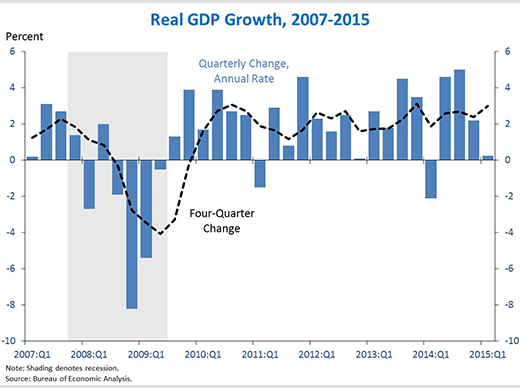 2. Growth in the first quarter of 2015 was restrained by a historically harsh winter. This quarter was only the fourth in 60 years on record with three or more snowstorms sufficiently severe to be rated by the National Climatic Data Center’s Northeast Snowfall Impact Scale (NESIS). In addition, as measured by heating degree days, this quarter was the third coldest in twenty years. Indeed, winter weather likely reduced both consumption and investment, contributing to this quarter’s below-trend output growth. The historical relationship between weather and first-quarter growth suggests that weather may have reduced annualized growth by about a full percentage point this quarter (similar to estimates by Macroeconomic Advisers and Goldman Sachs). Also, first-quarter growth has been especially weak in recent years even after seasonal adjustment, averaging 0.3 percent per year over the past five years as compared with 2.9 percent for Q2 through Q4. This observation at least partially reflects generally worsening weather over the past decade, which may not yet be accounted for in seasonal-adjustment algorithms. While some output lost due to weather may not be regained, many forecasters expect that much of the lost demand from the first quarter will be diverted toward the second. 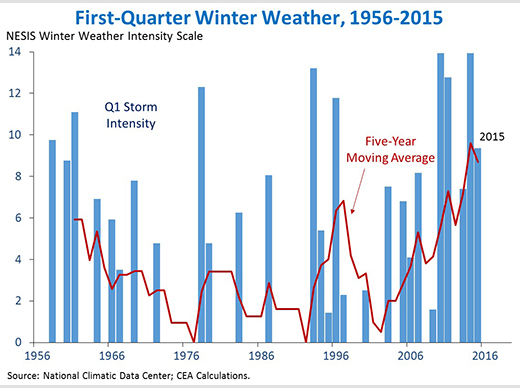 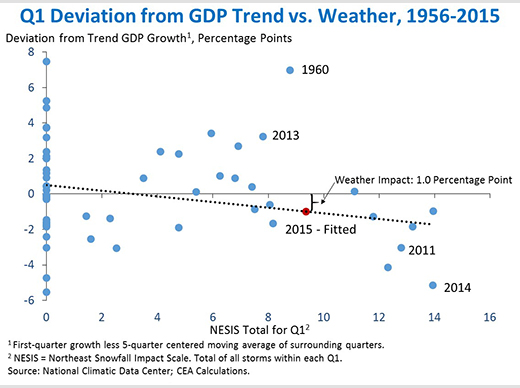 3. Consumers have so far saved most of their windfall gains from last year’s energy price decline, leaving scope for increased consumer spending later this year. Since June, national average gasoline prices have fallen about $1.10 per gallon, providing the equivalent of about a $700 tax cut per household. Looking over the past year, energy consumption as a share of disposable personal income has declined by 1.1 percentage points, leaving more space in consumer checkbooks to save and spend. To date, however, households appear to have put most of those gains in the bank, as the personal saving rate has risen by 0.6 percentage point over the past four quarters. Just over the last quarter, the personal savings rate rose 0.9 percentage point — an unusually large increase that is at the 90th percentile of historic increases.  Rising saving suggests continued improvement in households’ financial situation. This will help foster conditions for stronger consumer spending growth over the course of the next year, especially in light of the fact that consumer confidence measures are nearly the highest they have been since before the financial crisis. 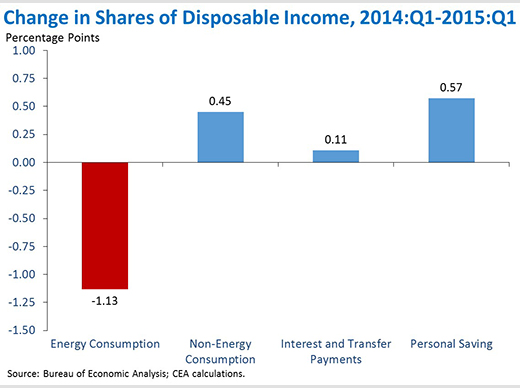 4. The volume of U.S. exports to foreign countries is heavily sensitive to foreign GDP growth. Indeed, year-over-year foreign GDP growth — when weighting countries by the volume of their annual trade with the U.S. — explains much of the variance in U.S. export growth. To the extent the global slowdown persists, it will likely continue to weigh on U.S. export growth, as it has over the past year. The continuing impact of the global slowdown was likely an important driver of the 7 percent annualized decline in U.S. exports during the first quarter, which reduced annualized GDP growth by nearly a full percentage point. The sensitivity of our exports to foreign demand, especially in an environment where foreign demand is slowing, underscores the importance of reducing trade barriers and opening foreign markets to our exports. 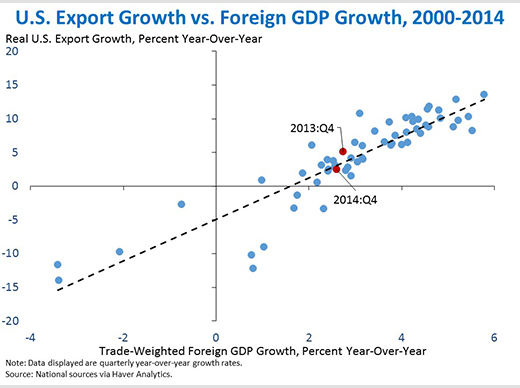 5. Real private domestic final purchases (PDFP) — the sum of consumption and fixed investment — rose 1.1 percent at an annual rate in the first quarter, a faster pace than overall GDP. Real PDFP growth is generally a more stable and forward-looking indicator than real GDP, as it excludes volatile components like inventory investment, net exports, and government spending. Indeed, PDFP is a more accurate predictor of next-quarter GDP than GDP itself. It is, however, sensitive to weather just like overall GDP, as the impact of weather is especially important in consumption and investment. The year-over-year growth rate of PDFP rose this quarter to 3.3 percent, faster than overall GDP. 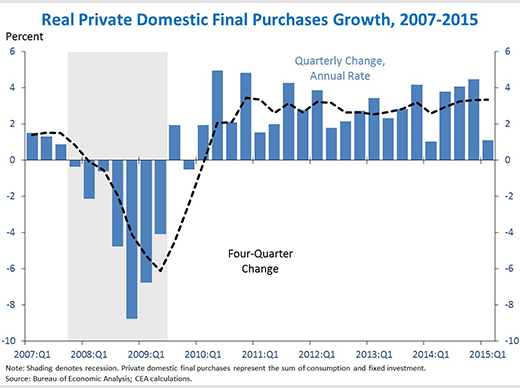