April 29, 2015 at 4:00 PM ET by Carrie Bettinger-Lopez, Dr. Tiffany McNair
Twitter Facebook Email
Summary:
Vice President Biden attends a rally held at the University of Illinois at Urbana-Champaign (UIUC) to address the travesty of sexual violence on our nation’s college and university campuses. 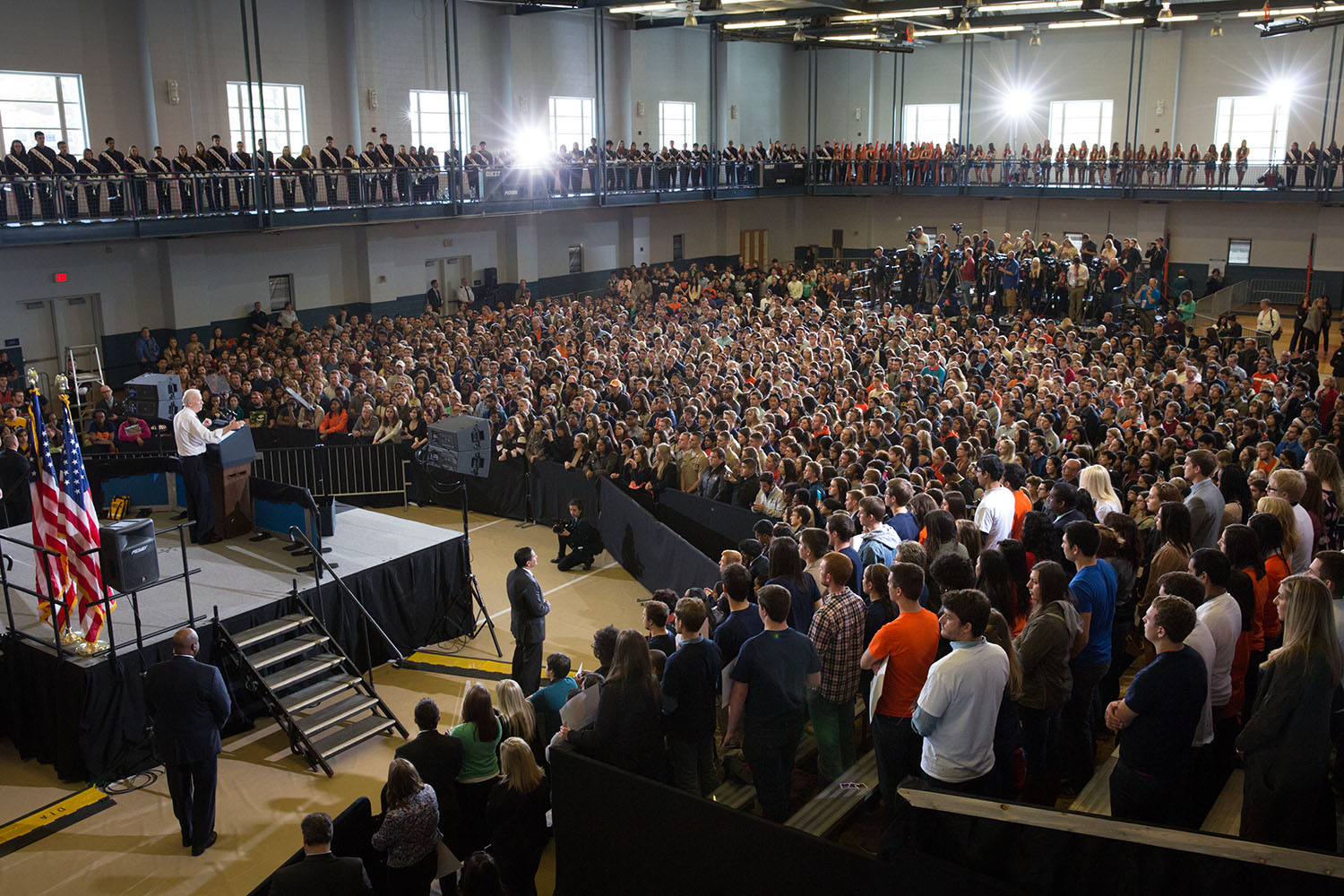 “Don’t look to your left, don’t look to your right, it’s on you.” Vice President Biden spoke these powerful words last Thursday at a rally held at the University of Illinois at Urbana-Champaign (UIUC) to address the travesty of sexual violence on our nation’s college and university campuses. The Vice President galvanized an enthusiastic mass of students, administrators, community leaders, advocates, and survivors to mark Sexual Assault Awareness and Prevention Month and to celebrate the "It’s On Us" campaign.

It’s on Us, launched by the Administration last September, is an initiative that focuses both on the dignity and rights of survivors, and on the broader societal responsibility for preventing and putting an end to sexual assault on college and university campuses. By proclaiming “it’s on us,” the campaign emphasizes that everyone—including bystanders and those not immediately impacted by sexual assault, as well as institutions like schools, law enforcement, religious and athletic organizations, and others—must step up to the plate. Bystanders, both as individuals and as a collective, have the opportunity and the agency to intervene when someone else is at risk. They also have the ability to discourage harmful behaviors by establishing a new conversation on healthy relationships, positive images of women, and a rejection of gender inequality.

It’s On Us was established upon these cornerstone principles. With public and private partners, including study body leadership from over 200 colleges and universities, the campaign has moved in an encouraging direction. After two national weeks of action, campuses have created nearly 200 public service announcements (PSAs), students have led over 300 campaigns, and more than 200,000 people around the country have taken the It’s On Us pledge. Both the President and Vice President have also appeared in a national PSA, which has helped garner attention on social media platforms.

A celebrity guest, Jessica Szohr, from the USA Network’s “Complications,” then delivered brief remarks, which were followed by an introduction of the Vice President by UIUC’s student body president. Vice President Biden then spoke, and reminded us of the magnitude of the problem: “Among the nearly 14 million American women who have been raped in their lifetime,” he said, “almost 80% of them were first raped before their 25th birthday.”

The Vice President reflected on the lessons learned since the passage of the Violence Against Women Act (VAWA), which he wrote and sponsored over 20 years ago. He honored the survivors who had the courage to speak up and take action, and exhorted all of us to follow their example of courage. He challenged the crowd—and especially young men—to speak up: “Silence is a form of approval. Inaction is a form of cowardice.” He implored the crowd to take and follow the It’s On Us pledge and to intervene, protect, and support: “Call somebody. Yell or holler. Do whatever it takes to distract and stop. But you got to step up. You got to step in. You got to speak out.”

The Vice President also spoke of the legal and moral responsibility of colleges and universities to protect student victims, enforce legal protections, and prevent sexual violence in the first place. Invoking the landmark Title IX of the Education Amendments of 1972, which protects people from discrimination based on sex in education programs or activities which receive Federal financial assistance, he noted that the Department of Education “has made it crystal clear that schools that fail this responsibility are in violation of Title IX and risk federal investigation and financial penalties.”

The Vice President’s speech echoed the Administration’s insistence on a fundamental culture shift in the U.S., away from our country’s historic tendency to turn a blind eye to sexual violence and assault, and instead turn our gaze toward prevention, protection of victims and survivors, and effective responses when violations occur. These sentiments are captured in both the It’s On Us campaign and a 2014 report prepared by the White House Task Force to Protect Students from Sexual Assault, entitled "Not Alone." The report was the product of a national conversation, including 27 listening sessions with over 2,000 stakeholders, which resulted in the development of a series of action steps, recommendations, and best practices in four key areas: 1) identification of the problem, 2) prevention and engagement of men, 3) effective response by schools, and 4) improving the government’s enforcement efforts.

One of the salient themes that emerged from the Not Alone listening sessions is that most men want to contribute to anti-violence efforts, but do not know how to become engaged. Nevertheless, their involvement is absolutely crucial to shifting how all of us create, think about, act on, and spread norms about sex, gender, identity, and power. The It’s On Us campaign picked up on this theme and focuses especially on engaging male students in stopping sexual violence and assault.

The It’s On Us campaign is only the tip of the iceberg in the Task Force’s efforts. It’s essential for colleges and universities to step up their response, for policymakers to speak out and step up enforcement of existing legal protections, and for other entities to step in: non-profit and business leaders, healthcare providers, celebrities, law enforcement officers, parents, teachers, friends, and you. And as a major public health issue, prevention is key. We must intervene before the violence begins. For that reason, the Task Force is also turning its attention to younger students and the problem of sexual assault in our nation’s elementary and secondary schools.

As a lawyer and a doctor, both turned policy advisors in the White House, we are particularly sensitive to our own roles in the matter. Whether fighting for human rights or advancing women’s health, we, too, are responsible. We are accountable for carrying this charge beyond a pledge. This endeavor will require continued reflection, motivation, collaboration, and innovation.

As we close out April—Sexual Assault Awareness and Prevention Month—may we use this opportune moment to reflect on the work that’s been done; motivate a cultural shift that condemns gender violence; collaborate to generate meaningful and far-reaching partnerships; and, innovate to determine the most creative and impactful steps we must take in our communities to make a positive change. And may we understand that equality between women and men, girls and boys, cannot be achieved until all members of society stop turning a blind eye to the violence around us.

Today, may we pledge to ACT.

Tiffany McNair, MD, MPH, an obstetrician-gynecologist and preventive medicine physician, is a White House Fellow serving in the Office of the Vice President.