40 Years Ago: The End of the Vietnam War 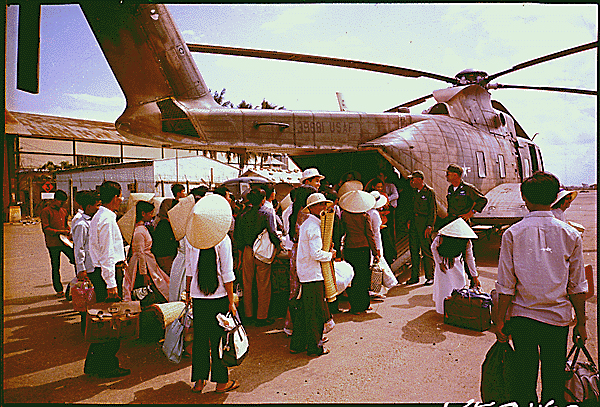 South Vietnamese villagers board a CH-3C helicopter, 1966. (Photo from the National Archives)

Today marks the 40th anniversary of the end of the Vietnam War and the arrival of the Vietnamese, Laotian, Cambodian, and Hmong communities to the United States. As a refugee, I reflect on the sacrifices of families in trying to leave Southeast Asia, and some lucky ones, including my own family, in coming to this country and rebuilding our lives.

I was ten years old in April 1975. My memories from that time are similar to the images Americans saw of Vietnam then – only from the perspective of being part of it all. Long lines of refugees escaping the fighting in the countryside – my mother, brother, and I were among them, trying to get to my father in Saigon. The crowded Tan Son Nhut airport where the last flights took off for America – my family slept in the terminal before getting kicked out. The American embassy where the helicopters were picking up refugees off the rooftop – we were in the crowd below. Barges floating aimlessly in the South China Sea – we were on one. American soldiers pulling people onto ships as they dangled above the water – I held on for dear life. My family was among the lucky ones who made it to freedom.

While we were grateful to be in the United States, there were trying times during those early years. We were sponsored by a church out of the refugee camp at Fort Indiantown Gap to Harrisburg, PA. My parents’ lack of English proficiency limited their job options to doing laundry in a nursing home. My brother and I were sent to live with American sponsor families. My mother tolerated that for my four year-old brother for only a few months, but I lived with my sponsor family for almost two years. Because of that separation, I learned to speak English fluently. I also learned what football was and within several weeks, doing things with a helmet and pads that I know now were bad for me! When I came back to live with my parents, I became the person who helped them deal with activities like filing taxes and talking to doctors.

In 1978, my grandmother died in Vietnam. My mother started going to the doctor more often, but I was not asked to translate. It was only several years later that I learned she had become very depressed. My father, who had not seen his own parents since 1954 when he left North Vietnam to go to the South, moved us to San Jose, CA, where there was an emerging Vietnamese community. My mother improved as soon as she was able to talk to people who understood her, eat Vietnamese food whenever she wanted, and did what she had always done best, which was to sell products like food and jewelry.

The growing Vietnamese community provided us with the extended family that we no longer had. We went to weekly Vietnamese Catholic mass at a community center. I was busy going to school, working a part-time job, and helping my parents with their grocery store.

April 30 was a day of commemoration, but we observed silently. The wounds were so fresh for so many in the community that there was much anger and non-acceptance for diverging points of view. My friends and I learned to treat “politics” as a third rail to be avoided even in private conversations because of the threat to our friendship.

More Vietnamese refugees came – first in the late 1970s as the Boat People (as they were called), arriving from the refugee camps of Southeast Asia, and then in the late 1980s and early 1990s as political prisoners were released from the re-education camps in Vietnam. These Vietnamese Americans were poorer and had, in addition to all the trauma from the War, the brutalization of the re-education camps, the crossing of the pirate-infested seas, and the deprivation of the refugee camps.

My generation, filled with survivor guilt, found an outlet. We conducted hunger strikes for better treatment of the refugees in Thailand. I became a doctor to take care of people like my mother. My medical school classmates and I walked 50 miles from San Francisco to San Jose to raise money. I began to ask the questions about what we knew about Vietnamese American health that led me on my career path as a health disparities researcher. Some of my friends focused their efforts on helping to improve the conditions for those still in Vietnam. Along the way, we learned that we were not reluctant to speak up and to stand out when the cause was the good of our community. We became, in all sense, true Americans.

Every April, we reflect on the lives we left behind and the friends and family members who were not with us. The rest of the year, we work to keep the memories and the traditions alive while working hard to build new lives as Vietnamese Americans.

As April ends, May comes in as Asian American and Pacific Islander Heritage Month. April 30 is a day of reflection for 1.9 million Vietnamese Americans. We talk about what we have lost and what we have gained. We speak of what we need and what we can contribute. We tell our stories, the sad ones and the happy ones, the best way we can, in Vietnamese or in English, but usually in a mixture of both. And we tell ourselves that an ending in history is just the beginning of a story.

Dr. Tung Nguyen is Chair of the President’s Advisory Commission on Asian Americans and Pacific Islanders.