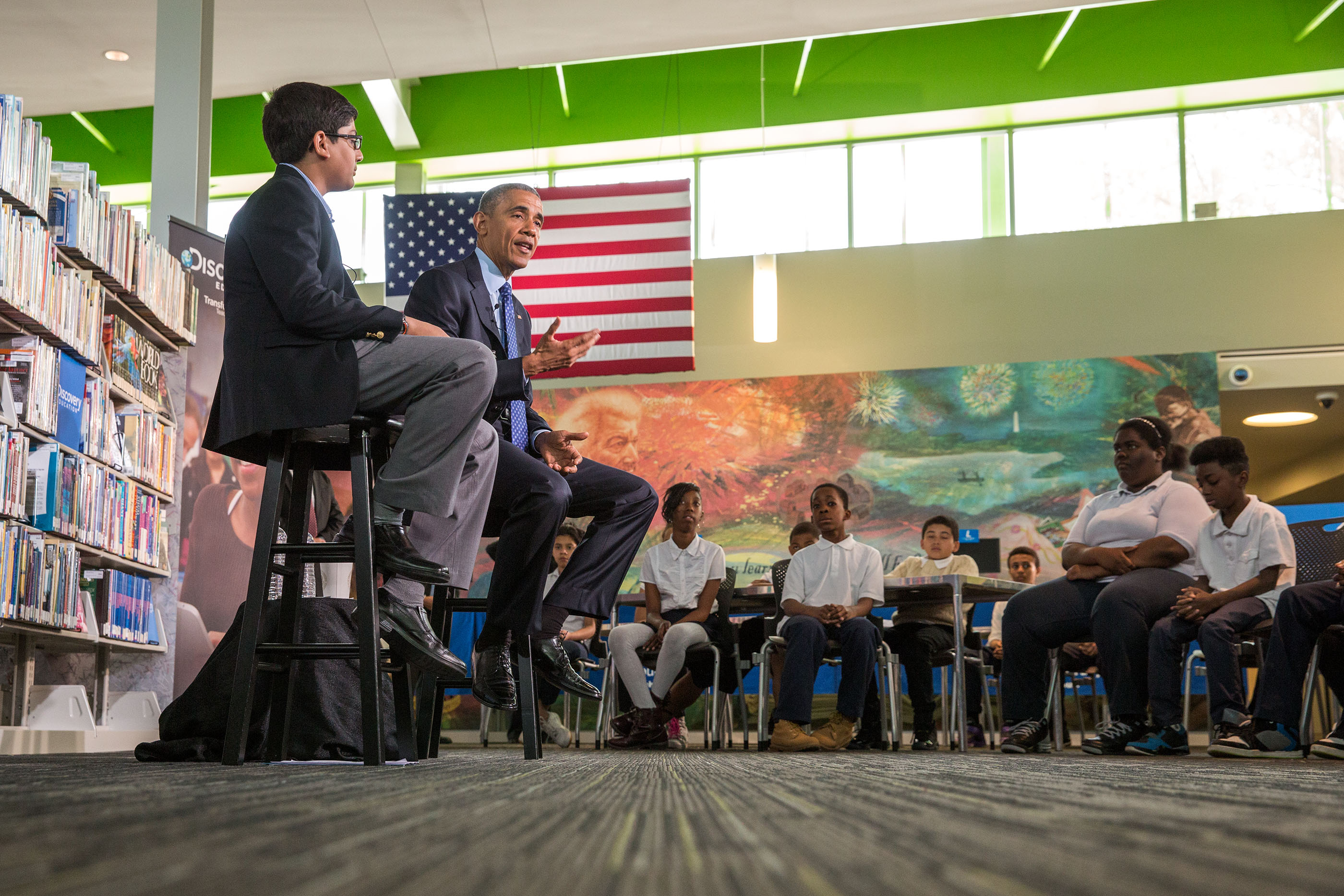 President Barack Obama answers questions from students during the Discovery Education webinar entitled "Read to Discover a World of Infinite Possibilities," at the Anacostia Neighborhood Library in Washington, D.C., April 30, 2015. 6th-grader Osman Yaya moderates the event which is part of the "Of the People: Live from the White House" Virtual Field Trip series. (Official White House Photo by Chuck Kennedy)

Two years ago, President Obama launched ConnectED -- a bold initiative to connect all of America’s schools and libraries to the digital age, to jumpstart learning technology, and to ensure that America’s young people can benefit fully from new advances in digital content and connectivity.

As part of the ConnectED effort, today the President traveled to the Anacostia Neighborhood Library in Washington, D.C. to announce new partnerships to expand access to free books for America’s students, and to ensure every student has easy access to their local library and the wealth of knowledge and resources it can provide.

RT if you're excited about President Obama's new commitment to expand access to books for kids. #BooksForAll http://t.co/sOgAoVTugu

Education technology and Internet access have the potential to unlock a universe of learning, placing new knowledge and experiences within reach of all children, and their teachers and families. It has the potential to connect students with rich, relevant learning environments; new opportunities for exploration and discovery; and the ability to access everything from the latest news cycle to the oldest books.

It is our responsibility to ensure that all children and their teachers have access to these networked tools and resources -- which means closing an equity gap that can be as profound for digital content as it is for Internet connectivity.

Since the launch of ConnectED, public and private partners have joined with the Obama administration to take action to connect America’s schools, libraries, and students to educational opportunity. The Federal Communications Commission is delivering billions in new federal funding for connectivity in classrooms and libraries. Private-sector partners are delivering billions in free technology commitments for schools, teachers, and students. And superintendents and teachers around the nation are rising to the challenge and committing to connect their classrooms and make educational technology easily available and accessible for their students and teachers.

As a result of these efforts, the nation is on track to meet the President’s goal of connecting 99 percent of our students to high-speed broadband in their classrooms and libraries within five years.

That’s motivating schools to invest in individual student devices, be they laptops, tablets, or smartphones that can support student learning. Some of the nation’s largest districts, like Miami-Dade, FL, are taking this step, and opening up new opportunities for students to code, collaborate, and engage in 21st century learning. And crucially, in many districts, these devices are assigned to students throughout the year, meaning that they can continue their work at home or in Wi-Fi-enabled community hotspots, such as their local library, after school, and during school holidays.

Young student: “What kind of technology did you have when you were in school?” Obama: “We had pencils” #BooksForAll http://t.co/w5dkLn3dN2

For generations, our nation’s public libraries have been hubs of lifelong learning. For youth with access to few resources, they help bridge the gap between school and home, and ensure continued access to educational resources. For many, they are the only source of free Internet access in the neighborhood, making them a lifeline for American families that lack home Internet access. And more than 60 percent of low-income first graders don’t have a library card. Kids that age should be exposed to reading as much as possible, as just 10-20 minutes of reading each night can have an extraordinary impact on a child’s learning.

So today the President is announcing two things: First, the ConnectED Library Challenge -- an effort to put a library card in the hand of every student, and with it access to the potentially life-changing resources of their local library. 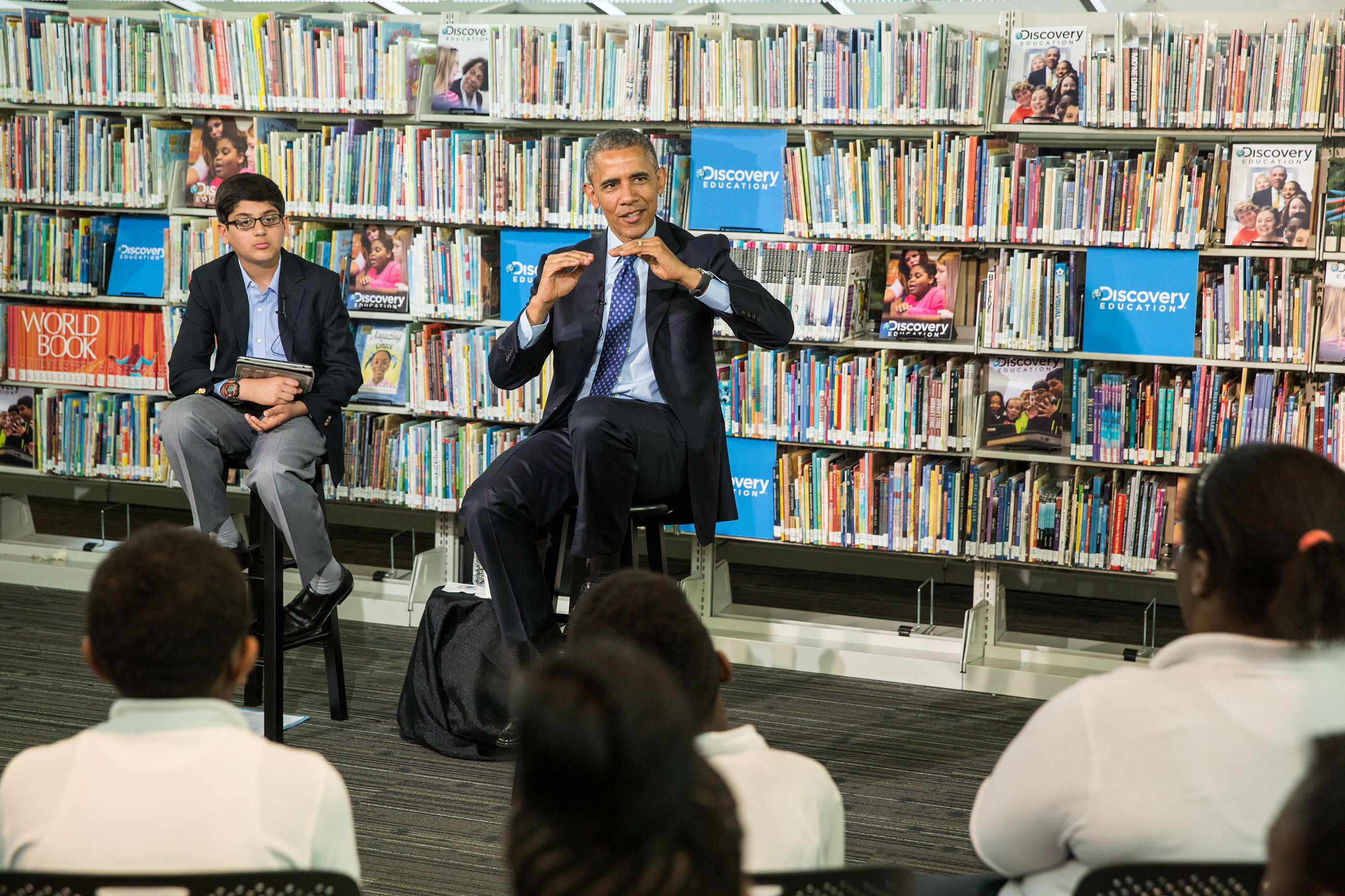 President Barack Obama answers questions from students during the Discovery Education webinar entitled "Read to Discover a World of Infinite Possibilities," at the Anacostia Neighborhood Library in Washington, D.C., April 30, 2015. 6th-grader Osman Yaya moderates the event which is part of the "Of the People: Live from the White House" Virtual Field Trip series. (Official White House Photo by Pete Souza)

We also know that digital devices are proliferating rapidly. Recent research shows that even among households making under $30,000, 47 percent -- almost half -- have access to a mobile device. And as that number grows, particularly with the help of the private-sector commitments of ConnectED and schools’ own adoption of digital tools, it presents an opportunity to support kids who want to continue learning beyond the classroom walls, in their own homes and communities after school.

As we continue to broaden access to online resources both inside and outside of the classroom, we also are working to pair that access with quality content that can help them develop a life-long love of learning.

That is why today, the President also announced that a coalition of libraries, nonprofits, and publishers are collaborating to bring thousands of e-books to millions of children through a new digital app in the coming months. Publishers are contributing over $250 million worth of free e-books, which will be available later this year through that free, public app, which will work on a variety of digital platforms. Participating publishers so far include Bloomsbury, Candlewick, Cricket Media, Hachette, HarperCollins, Lee & Low, Macmillan, Penguin Random House, and Simon & Schuster.

“The Harry Potter books were pretty cool too. I started reading those to Malia starting when she was around 5” —Obama http://t.co/DJ0LKcRt5F

The e-book app, developed by the New York Public Library and the Digital Public Library of America, with support from the Institute of Museum and Library Services, will bring kids from low-income schools access to a wealth of knowledge that previously would be out of their reach. They’ll be able to gain access through the app and First Book, which will work with its national network of schools and teachers to enroll eligible students.

President Obama believes that every child, regardless of where they live or their circumstances, deserves every opportunity to learn and succeed in school and in life. As part of the ConnectED Initiative, the commitments announced today will be an important step to help make that a reality.