May 6, 2015 at 3:27 PM ET by Tamara Dickinson
Twitter Facebook Email
Summary:
On the anniversary of the U.S. National Climate Assessment, the President's Science Advisor John Holdren meets with and highlights communities and regions that are using the tool to take action on climate where it matters most.

A year ago today, hundreds of the country’s top climate scientists confirmed that climate change is affecting every region across America in the third U.S. National Climate Assessment (NCA) – the most comprehensive scientific report on domestic climate change impacts ever generated. Since then, communities, localities, and states have continued to use scientific information from the NCA and elsewhere to inform action and make resilience-related decisions on the ground.

Today, in an effort to shine a light on the extraordinary work being done at the regional level and to better understand and address local scale climate-change impacts, President Obama’s Science Advisor John Holdren spent the day with community leaders, scientists, and students at the University of Nebraska—Lincoln (UNL), where researchers are conducting cutting-edge work to develop and deploy actionable climate science.

In 2014, UNL leveraged information from the third NCA to develop its own report, Understanding and Assessing Climate Change: Implications for Nebraska. This state-focused scientific assessment is aimed at ensuring businesses, communities, decision makers, and citizens across Nebraska have the best available information about climate impacts occurring in their own region.

That’s just one example of the many ways communities and regions are taking steps to translate science into actionable information where it matters most – America’s towns, cities, and communities.


The Obama administration is continuing to do its part to facilitate these localized efforts. Based on tremendous positive feedback from stakeholders and decision makers about the utility of the NCA for their work and planning, the interagency U.S. Global Change Research Program (USGCRP) is conducting a “sustained assessment” process to provide the nation with scientific information about climate change on an ongoing basis. 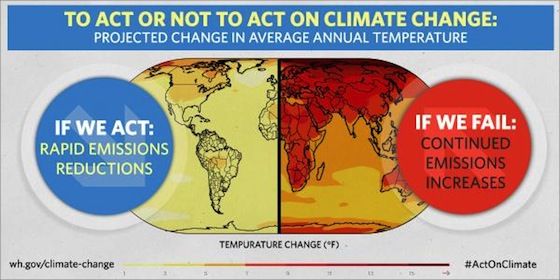 This effort is focused on enhancing the federal government's ability to deliver timely, scientifically rigorous products that can support climate preparedness and resilience decisions across the country. It is also helping foster collaboration among decision makers at the national, regional, tribal, and local levels. Broad public participation is a cornerstone of this effort, which includes a number of new and ongoing activities to collect feedback and inform decisions on the ground:

Tamara Dickinson is Principal Assistant Director for Environment and Energy at the Office of Science and Technology Policy.