May 8, 2015 at 9:45 AM ET by Galen Main
Twitter Facebook Email
Summary:
Ernesto, a veteran of the Army Air Corps' 100th bombardment group during the Second World War, wrote a letter to President Obama to thank him for paying a visit to the Southwest -- and the President thanked him, in return.

We periodically feature an exchange between the President and an American who wrote him. Check back soon for more — and if you'd like to write the President yourself, you can do so here.

I work in the Office of Presidential Correspondence, and one of the most rewarding parts of my job is helping process correspondence from our nation’s veterans.

On the 70th anniversary of Victory in Europe Day (V-E Day), I wanted to share with you one of the thousands of letters the President has received from WWII veterans and their families. The President was raised with the help of his grandparents — a veteran who served in the European Theater during WWII, and a Rosie the Riveter who worked on a bomber assembly line during the war. And I think partly for that reason, this mail always seems to really grab the President’s attention.

Below is one of these letters. World War II veteran Ernest Lovato of Albuquerque, New Mexico wrote the President to thank him for a visit to the Southwest, and shared photos of two of the B-17 Flying Fortresses he painted while serving in the Army Air Corps' 100th Bombardment Group. The President responded — and he included a photograph of his own.

Today, as we watch World War II-era planes fly over the White House in honor of the anniversary of V-E Day, we pay tribute to all those like Mr. Lovato and the President’s grandmother, who helped build and maintain these planes helping lead the Allied forces to victory. And we solemnly remember all those we lost, remaining deeply humbled by all those who served.

Take a look at Mr. Lovato's letter, and the amazing photos he enclosed — including the B-17s he painted during WWII and the charming photo from his wedding day 72 years ago: 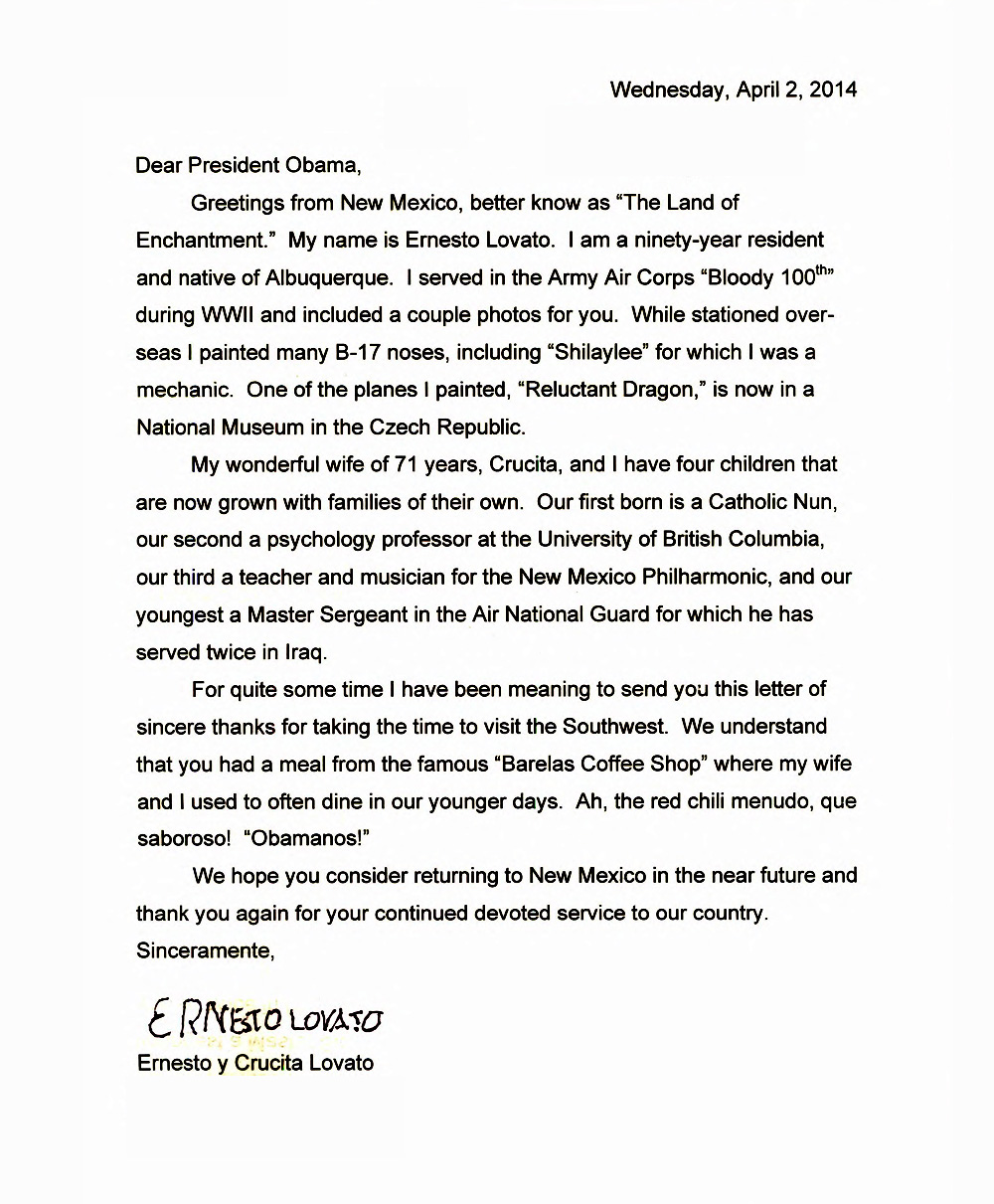 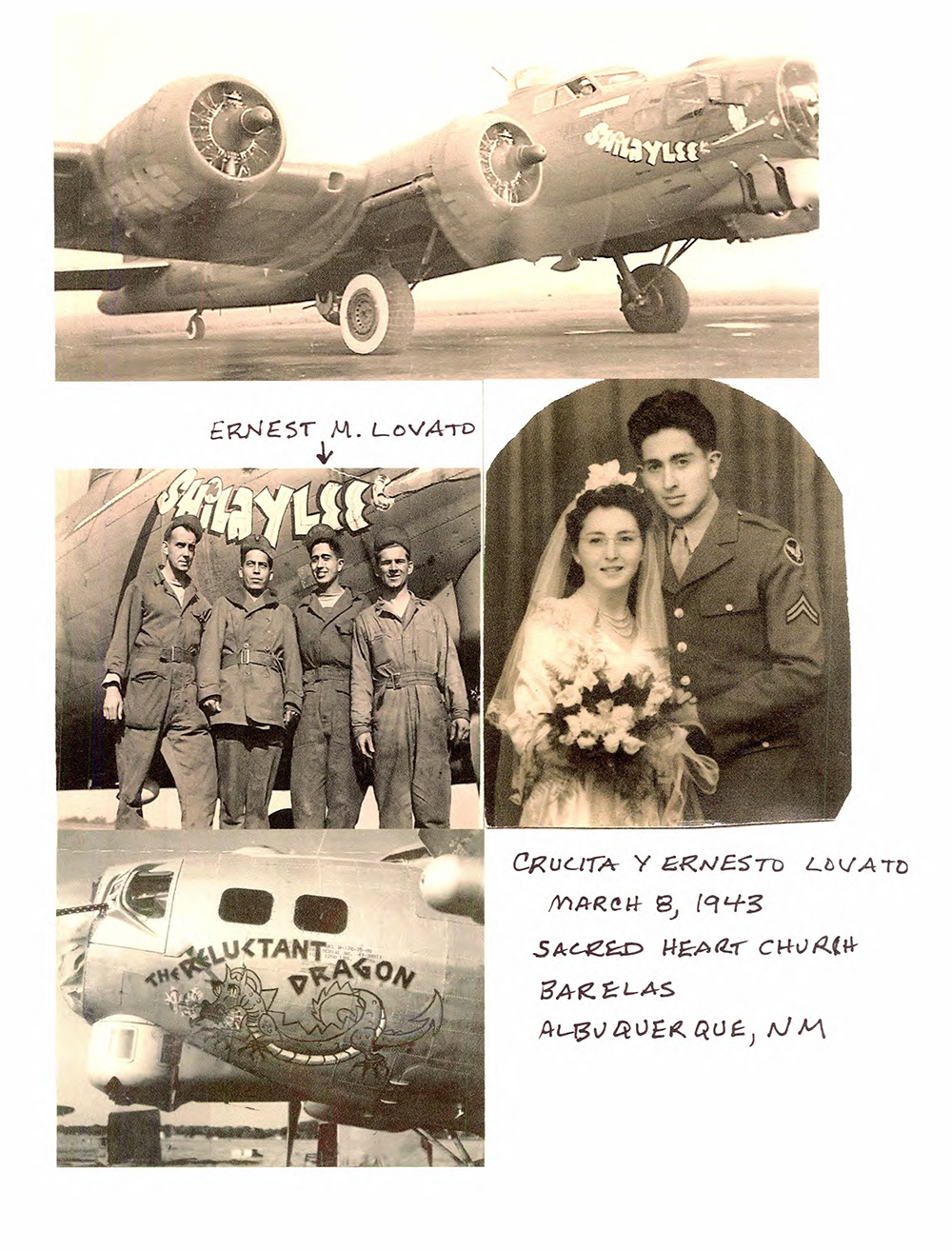 Read a transcription of the letter:

Greetings from New Mexico, better know as "The Land of Enchantment." My name is Ernesto Lovato. I am a ninety-year resident and native of Albuquerque. I served in the Army Air Corps "Bloody 100th" during WWII and included a couple photos for you. While stationed over-seas I painted many B-17 noses, including "Shilaylee" for which I was a mechanic. One of the planes I painted, "Reluctant Dragon," is now in a National Museum in the Czech Republic.

My wonderful wife of 71 years, Crucita, and I have four children that are now grown with families of their own. Our first born is a Catholic Nun, our second a psychology professor at the University of British Columbia, our third a teacher and musician for the New Mexico Philharmonic, and our youngest a Master Sergeant in the Air National Guard for which he has served twice in Iraq.

For quite some time I have been meaning to send you this letter of sincere thanks for taking the time to visit the Southwest. We understand that you had a meal from the famous "Barelas Coffee Shop" where my wife and I used to often dine in our younger days. Ah, the red chili menudo, que saboroso! "Obamanos!"

We hope you consider returning to New Mexico in the near future and thank you again for your continued devoted service to our country.

The President responded personally to the letter right before Ernest and Crucita celebrated their 72nd wedding anniversary and thanked Ernest for his family’s service — and he even complimented his artwork! Also, be sure to check out the photo the President signed for the couple of the coffee shop where they used to go on dates. 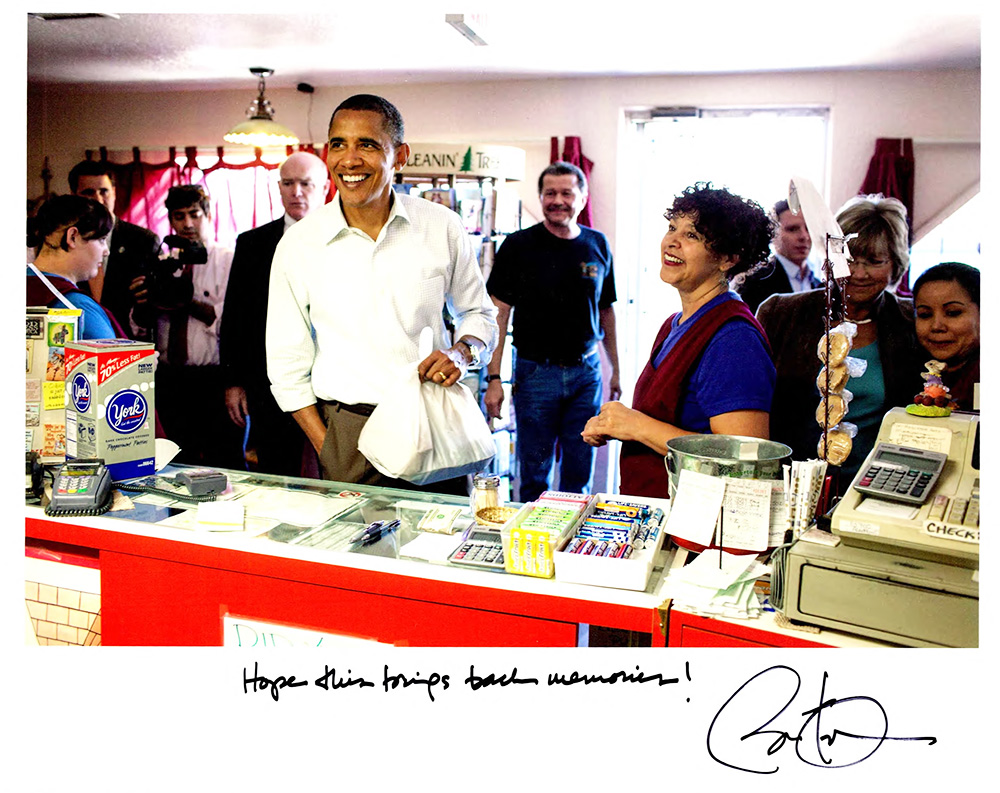 Read a transcription of the letter:

I was touched you sent such a thoughtful letter after my trip to the beautiful Southwest. The photographs of the B-17 noses you painted were quite something!

Most of all, I wanted to be sure to send you and your beautiful bride, Crucita, my best wishes for your 72nd wedding anniversary next month. Thank you for sharing some of the memories you have made throughout your journey together.

I am grateful for your family's service to our Nation, and it is a privilege to serve as your President. I wish you, Crucita, and your children the very best.

The voices of people across America inform the President and give him invaluable perspective on the progress we’ve made  —  as well as the work we’ve got left to do. If you want to write the President yourself, you can do that here.