What President Obama Said to the Adas Israel Congregation:

"Jewish American life is a testimony to the capacity to make our values live. But it requires courage. It requires strength. It requires that we speak the truth not just when it's easy, but when it's hard."

Last Friday, President Obama spoke to the Adas Israel Congregation in Washington, D.C., which became the first synagogue to host a sitting president when President Grant attended a service back in 1876. It was also the first synagogue to host Dr. Martin Luther King, Jr. This reflects how deeply Jewish heritage is woven into the fabric of American life -- both in our values and our vision for the future.

The President offered his personal views not only on the part Jewish Americans have played in shaping our country, but on the role our country must play in shaping a future that lifts up the Jewish people for generations to come:

On the impact of Jewish American values on our history:

"As a community, American Jews have helped make our union more perfect. The story of Exodus inspired oppressed people around the world in their own struggles for civil rights. From the founding members of the NAACP to a freedom summer in Mississippi, from women's rights to gay rights to workers' rights, Jews took the heart of Biblical edict that we must not oppress a stranger, having been strangers once ourselves."

On his personal commitment to Israel and its security:
"It would be a moral failing on the part of the U.S. government and the American people, it would be a moral failing on my part if we did not stand up firmly, steadfastly, not just on behalf of Israel's right to exist, but its right to thrive and prosper... [T]o a young man like me, grappling with his own identity, recognizing the scars of race here in this nation, inspired by the civil rights struggle, the idea that you could be grounded in your history, as Israel was, but not be trapped by it, to be able to repair the world -- that idea was liberating. The example of Israel and its values was inspiring."
On the reason why the U.S. is pursuing a nuclear agreement with Iran:
"I'm interested in a deal that blocks every single one of Iran's pathways to a nuclear weapon -- every single path. A deal that imposes unprecedented inspections on all elements of Iran's nuclear program, so that they can't cheat; and if they try to cheat, we will immediately know about it and sanctions snap back on. A deal that endures beyond a decade; that addresses this challenge for the long term. In other words, a deal that makes the world and the region -- including Israel -- more secure. That's how I define a good deal."
On his unwavering stand against anti-Semitism anywhere in the world:
"Anti-Semitism is, and always will be, a threat to broader human values to which we all must aspire. And when we allow anti-Semitism to take root, then our souls are destroyed, and it will spread."
Before taking his leave, the President popped in to a classroom where preschoolers were singing Shabbat Shalom: 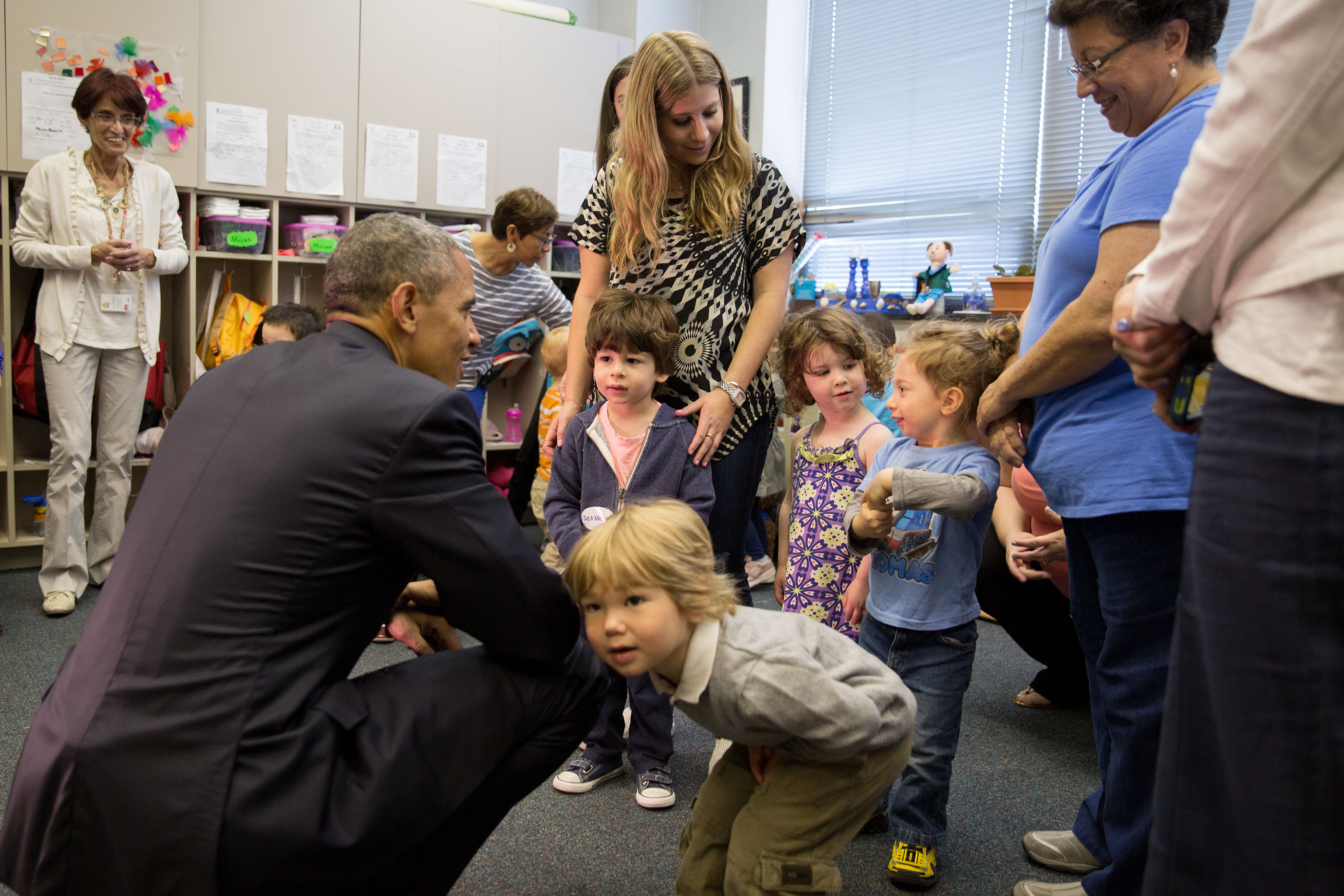 In a more poignant moment of the day, Adas Israel's Rabbi Steinlauf showed the President a Torah scroll, inspiring President Obama to share this with the congregation:

Before I came out here, the Rabbi showed me the room that's been built to promote scholarship and dialogue, and to be able to find how we make our shared values live. And the reason you have that room is because applying those values to our lives is often hard, and it involves difficult choices. That's why we study. That's why it's not just a formula. And that's what we have to do as nations as well as individuals. We have to grapple and struggle with how we apply the values that we care about to this very challenging and dangerous world.

See the President's full remarks from the event at Adas Israel congregration here.