How Drug Courts Make the Case for Alternatives to Incarceration 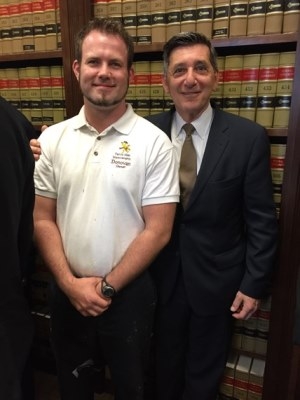 Donovan Simmons was the type of person many judges might have written off. He had pled guilty to a series of criminal charges, including burglary, and had been sentenced to five years in prison.

But Judge David Tapp of Somerset, Kentucky, refused to write Donovan off.

Like many people who come into contact with the criminal justice system, Donovan had a long history of substance use disorders. He struggled with serious marijuana and opioid use disorders, which began as he tried to cope with childhood trauma. Donovan was ill and needed medical treatment, not jail.

For decades, science has shown that addiction is a chronic brain disease—not a moral failing on the part of an individual. So treating the disease can give people caught up in the criminal justice system a chance to break free from the cycle of drug use, crime, arrest and imprisonment.

On March 10, 2011, Donovan got that chance when he entered Judge Tapp’s drug court. Drug court is an evidence-based alternative to incarceration for people with substance use disorders. Instead of a jail or prison sentence, drug court offers the opportunity for individuals to receive treatment in a structured environment with the support of a team of judges, attorneys, corrections officers, and treatment professionals. Usually, the drug court program requires a minimum of one year of participation and culminates in a graduation ceremony for successful participants.

When Donovan started drug court, he was dependent on family members for transportation, but he committed to regularly scheduled court appearances and meetings with Judge Tapp. Donovan’s recovery wasn’t easy, but he was determined to make progress, and progress came.

In early 2012, Donovan was hired as a property manager and anticipating graduating from drug court, but then he suffered a relapse.  Addiction is a chronic disease—just like heart disease or diabetes—and relapse is part of the journey to recovery for many people. Donovan didn’t give up on himself, and neither did Judge Tapp. He began drug court again, and in May 2014, he graduated.

Since then, Donovan has thrived, while maintaining his recovery and remaining arrest-free. He is still employed as an apartment manager, has launched his own small business, received custody of his children, and has pursued a computer technician certification from the Somerset Community College.

I met Donovan when I spoke at a drug court graduation in Kentucky this month. His story is just one of thousands of successful drug court graduates all across the country—people who seized the chance to change their lives for the better when they were given the opportunity. For years, our nation’s drug courts have made the case for the effectiveness of alternatives to incarceration for people with substance use disorders.

This month, we join our partners at the National Association of Drug Court Professionals to honor the accomplishments of drug court graduates like Donovan and thank the many drug court professionals for their commitment to second chances.