Speaking Up for Vulnerable AAPI Workers

May 28, 2015 at 9:55 AM ET by Phil Tom
Twitter Facebook Email
Summary:
A new report takes a hard look at the challenges faced by AAPI workers and offers recommendations to help break down barriers that prevent many of these workers from seeking help.

Every May we celebrate the contributions of Asian-Americans and Pacific Islanders in building a better, stronger, more vibrant America. As the fastest growing ethnic population in the U.S., AAPIs are also playing an important role in the nation’s economy — from Filipino health care workers to Korean grocers to South Asian taxi drivers to Vietnamese nail salon workers. Unfortunately, many AAPI workers are also some of our most vulnerable workers.

A Gallup poll highlighted a troubling statistic — that nearly 30 percent of AAPI workers have reported being victims of employment discrimination. Recognizing that AAPI workers face exploitation, but are among the least likely to assist government assistance, the White House initiative on Asian-Americans and Pacific Islanders — WHIAAPI — along with an interagency working group launched the Vulnerable Worker Project to seek out and hear directly from AAPI workers about the challenges they face in the workplace. 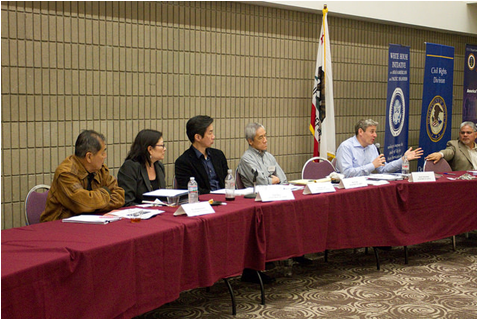 Federal officials − including the Labor Department’s Patricia Shiu (second from left), assistant secretary for federal contract compliance programs, and Phil Tom (fourth from left), director of the Center for Faith Based and Neighborhood Partnerships − participate in a listening session with AAPI workers held in Carson City, California, on Jan. 22, 2015.

Since August 2014, the project members, led by the U.S. Labor Department, held a series of five listening session across the country. The goals of the listening sessions were to (1) understand the specific employment and labor issues faced by the AAPI workforce in high-risk and low-wage industries; (2) educate AAPI communities about their federal civil rights and labor protections; and (3) develop enforcement and policy priorities for federal agencies to address persistent issues.

The information gathered in those listening sessions was compiled and released this week in a new report, The First Report Of the Vulnerable Workers Project: The Listening Sessions. The report takes a hard look at the challenges faced by AAPI workers and offers recommendations to help break down barriers that prevent many of these workers from seeking help.

A lot of the challenges are rooted in cultural barriers; many new immigrants from places like Bhutan, Burma and Cambodia arrive feeling isolated, and this isolation opens them up for exploitation from unscrupulous individuals who take advantage of their dire economic situation. Many fear of backlash from their communities if they report unlawful behavior by an employer from the same community.

What’s also troubling is the helplessness they feel when they do seek recourse. Participants talked about the difficulty navigating federal agencies for help — from challenges exposed by language barriers to the confusion that comes from having to deal with multiple federal agencies, and the complicated process to file complaint forms.

The WHIAAPI report offered several recommendations to improve access to federal services. One main priority is to continue the practice of “no wrong door” — no matter where workers are connecting with the federal government, it’s the agency’s responsibility to ensure the worker is connected to right federal program to offer assistance. The recommendations also include expanding language access, greater collaboration and coordination across federal agencies to improve services for vulnerable workers, increasing direct engagement with AAPI communities, and several other important reforms.

These are challenges that we have to overcome, and it’s a moral imperative to ensure that the services and protections offered by the federal government are available to all. From protections against misclassification and wage theft to reducing exposure to dangerous chemicals, the Department of Labor’s priorities are also priorities for AAPI communities.