June 4, 2015 at 8:00 AM ET by Jason Furman and Matt Fiedler
Twitter Facebook Email
Summary:
Since the Affordable Care Act's major coverage provisions took effect at the end of 2014, the Nation has seen the sharpest reduction in the uninsured rate since the decade following the creation of Medicare and Medicaid in 1965, and the Nation’s uninsured rate is now at its lowest level ever.

The Affordable Care Act has dramatically expanded access to health insurance coverage. Since the law’s major coverage provisions took effect at the end of 2014, the Nation has seen the sharpest reduction in the uninsured rate since the decade following the creation of Medicare and Medicaid in 1965, and the Nation’s uninsured rate is now at its lowest level ever. Combining these recent gains with earlier gains due to the law’s provision allowing young adults to remain on a parent’s plan until age 26, more than 16 million Americans had gained health insurance coverage as of early 2015. 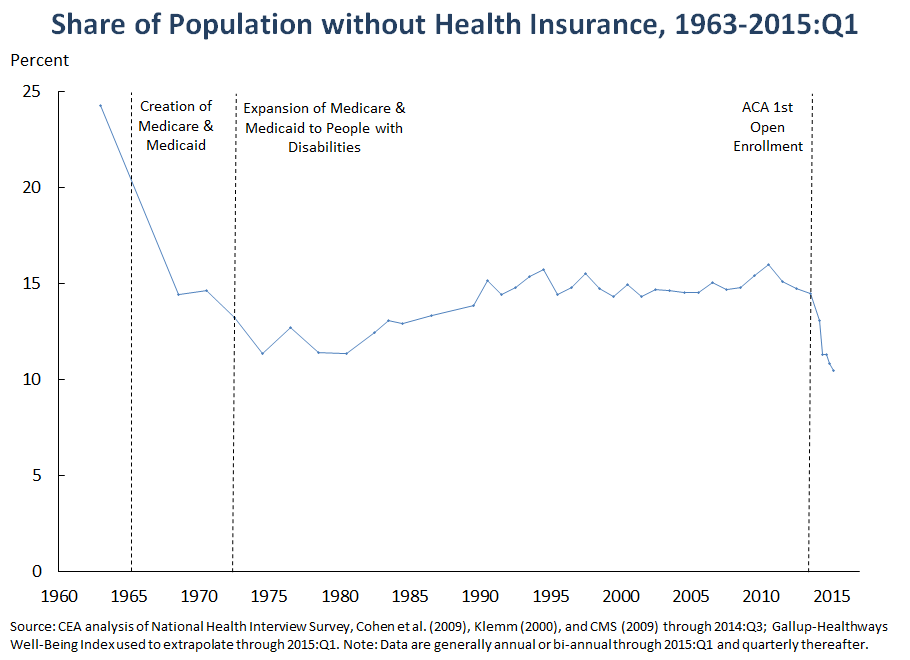 One important way the Affordable Care Act is expanding coverage is by providing generous financial support to States that elect to expand their Medicaid programs to cover all adults with incomes below 138 percent of the Federal poverty level. New data released this morning show that the number of people with coverage through Medicaid or the Children’s Health Insurance Program (CHIP) has risen by 12.2 million people from the start of the first open enrollment period under the Affordable Care Act through March 2015. From February to March alone, the number of people with Medicaid or CHIP coverage rose by more than 500,000 people.

These increases in Medicaid enrollment have occurred overwhelmingly in the 28 States and the District of Columbia that have elected to expand their Medicaid programs. (A 29th State, Montana, has passed legislation to expand Medicaid and is working with the Centers for Medicare & Medicaid Services to determine the structure of its expansion.) Consistent with these enrollment trends, surveys have found faster reductions in the overall uninsured rate in States that have expanded Medicaid than in States that have not expanded the program, with particularly wide disparities for States’ lowest-income residents. All told, researchers at the Urban Institute estimate that, if the States that have not yet expanded the program do not change course, 4.3 million of their residents will be deprived of health insurance coverage in 2016.

Also this morning, the Council of Economic Advisers released an updated report that uses the best evidence from the economics and health policy literatures to generate State-by-State estimates of the consequences of State Medicaid expansion decisions. While estimates of the effects of future policy changes based on past experience are necessarily uncertain, this evidence leaves no doubt that the consequences of States’ decisions are far-reaching, with major implications for the health of their citizens and their economies.

The report concludes that State decisions to expand Medicaid will have major benefits for their low-income residents, including:

The full report provides a detailed discussion of the methodology used to produce these estimates and State-by-State tables breaking down these and other consequences of Medicaid expansion. It is available for download here.