June 5, 2015 at 9:00 AM ET by Pete Souza
Twitter Facebook Email
Summary:
President Obama and the First Lady welcomed more than 35,000 guests to the South Lawn of the White House for the 137th annual White House Easter Egg Roll. Take a look at the big day in photos.

It was amid a whirlwind day in France for President Obama — and for me. We’d had an event with U.S. embassy personnel in Paris; a flight on Air Force One from Paris to Caen; a state visit with then-President Sarkozy; a picturesque helicopter ride into Normandy; the 65th anniversary of D-Day; a helicopter, then a plane ride back to Paris; and finally a tour with the Obama family at the Cathedral de Notre Dame. The President and First Lady greeted hundreds of people that day, including a small group of Army Rangers in Normandy.

Eight months later, I accompanied the President as he made his regular quarterly trip to visit wounded warriors at National Naval Medical Center in Bethesda. The 10th patient he visited that day did not at all look familiar to me. The patient, an Army Ranger, had suffered a severe brain injury caused by a roadside explosion in Afghanistan.

His name was Cory Remsburg.

Cory’s family asked the President if he could sign a photograph hanging on the wall. And there it was: a photograph that I had taken that day, eight months ago, of Army Ranger Cory Remsburg firmly shaking the hand of the President. “God bless…” the President began his inscription on the photo.

I had seen many wounded warriors injured in Iraq or Afghanistan during my many visits with the President. Some had suffered severe head or eye injuries. Others had lost an arm or leg. But I had never photographed any of these patients before their injuries. That changed with Cory.

The contrast between the two photographs was almost too much to bear:

A strong, healthy Cory Remsburg shaking hands with the President in 2009, and a severely injured Cory Remsburg, partially paralyzed with dozens of stitches across the entire right side of his skull, less than a year later.

I was visibly shaken when I left the National Naval Medical Center that day. I wondered whether Cory Remsburg would be able to fully function again.

The President was scheduled to deliver remarks at a high school in Phoenix. Waiting backstage in a fluorescent-lit classroom was Cory Remsburg. When the President finished his speech, he stopped by the classroom to visit Cory and his family. I was astonished when Cory stood up from his wheelchair, grasped his walker, and began to walk across the room.

The President told Cory’s story at the Disabled American Veterans Convention in August 2013. And soon thereafter, the New York Times also wanted to tell Cory’s story. We were asked to provide photographs from the President’s first greet with Cory in Normandy, from the hospital visit at Bethesda, and from the backstage walk in Phoenix. I was ambivalent about releasing the photograph of the President with Cory in the hospital — it was, after all, our policy not to release photographs of the President meeting with wounded warriors at the hospital. So I contacted Craig Remsburg, Cory’s father, to make sure he would be okay with us making an exception. Craig responded that he had discussed this directly with Cory, and that Cory wanted us to release the photographs to the New York Times, including the one from the hospital. During the next year, other organizations ran stories on Cory. Each time, I would double-check with Craig that Cory would be comfortable with our releasing the same photographs.

Then in 2014, Cory and his father sat next to FIrst Lady Michelle Obama at the President’s State of the Union Address. Both Democrats and Republicans stood as one to applaud Cory as the President paid tribute once again to Cory.

As I was drafting the language for this post, I asked Cory, through Craig, why he had decided to allow us to release the photograph of himself in the hospital — severely injured, with perhaps a hundred stitches in his head.

“As part of my recovery, this picture depicted the seriousness of injuries sustained during both wars,” Cory said.

Clearly, he wasn’t just talking about himself. He’s aware that he is speaking for all wounded warriors.

A few months ago, when the President was in Phoenix to speak on Veterans Affairs, his motorcade took an unscheduled detour to Gilbert, Arizona — a suburb of Phoenix. Waiting out front of his newly remodeled home was Cory Remsburg and his dad, Craig. As the President reached out to shake his hand, Cory’s face was beaming.

Cory invited the President inside to tour his new home. They sat at the kitchen table and chatted for a few minutes. Then the President, Cory, and Craig walked to the backyard to pay tribute to the volunteers who had helped to remodel the house.

“How surreal was this for POTUS to take the time to visit me during his schedule in Phoenix,” Cory said to me afterwards. “Very sweet for a visitor like that.”

Later, back on Air Force One, I remarked to the President that I had shaken hands with Cory and was surprised at how firm his handshake was. But I guess I shouldn’t have been. It was a handshake befitting a Sergeant First Class Army Ranger. 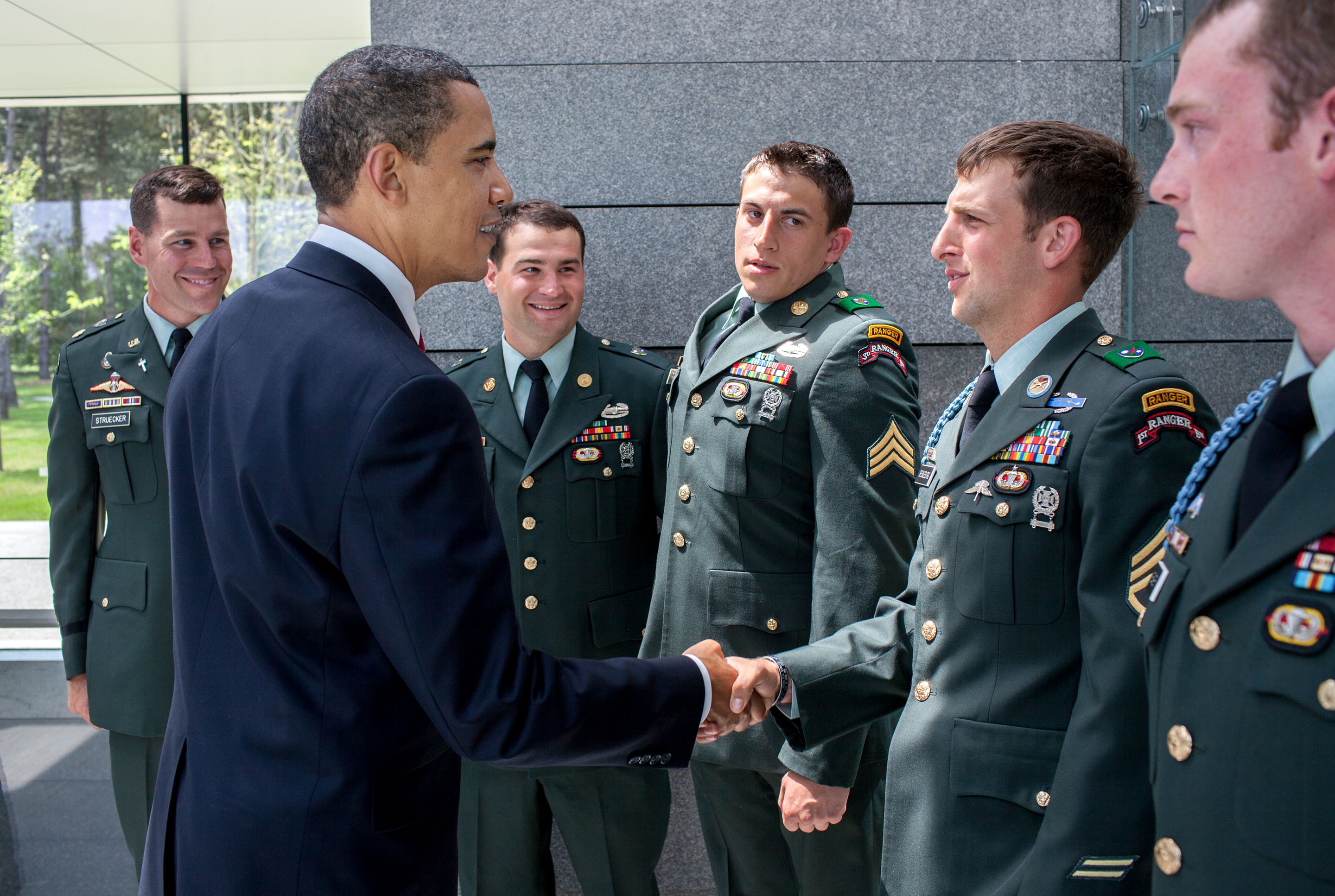 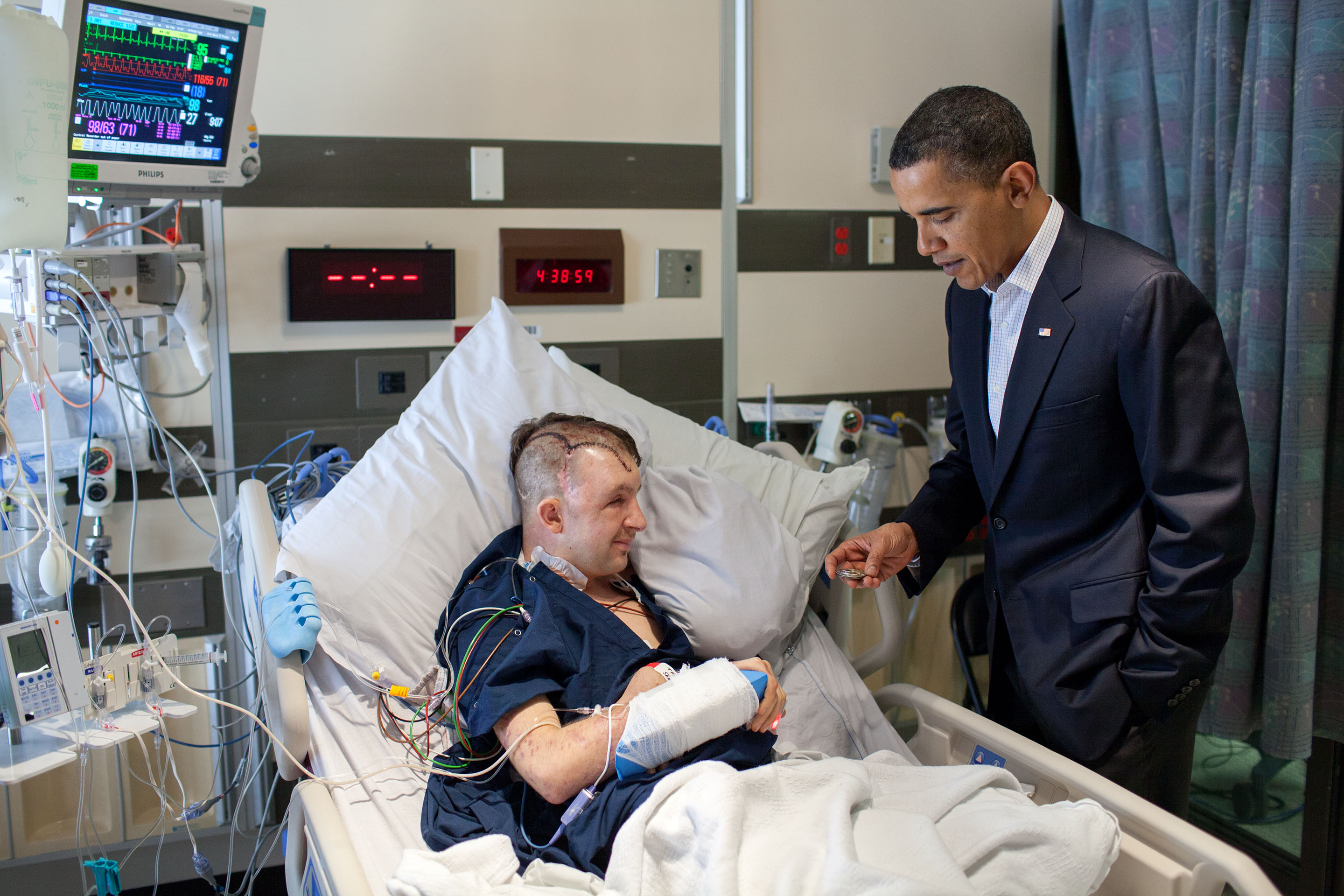 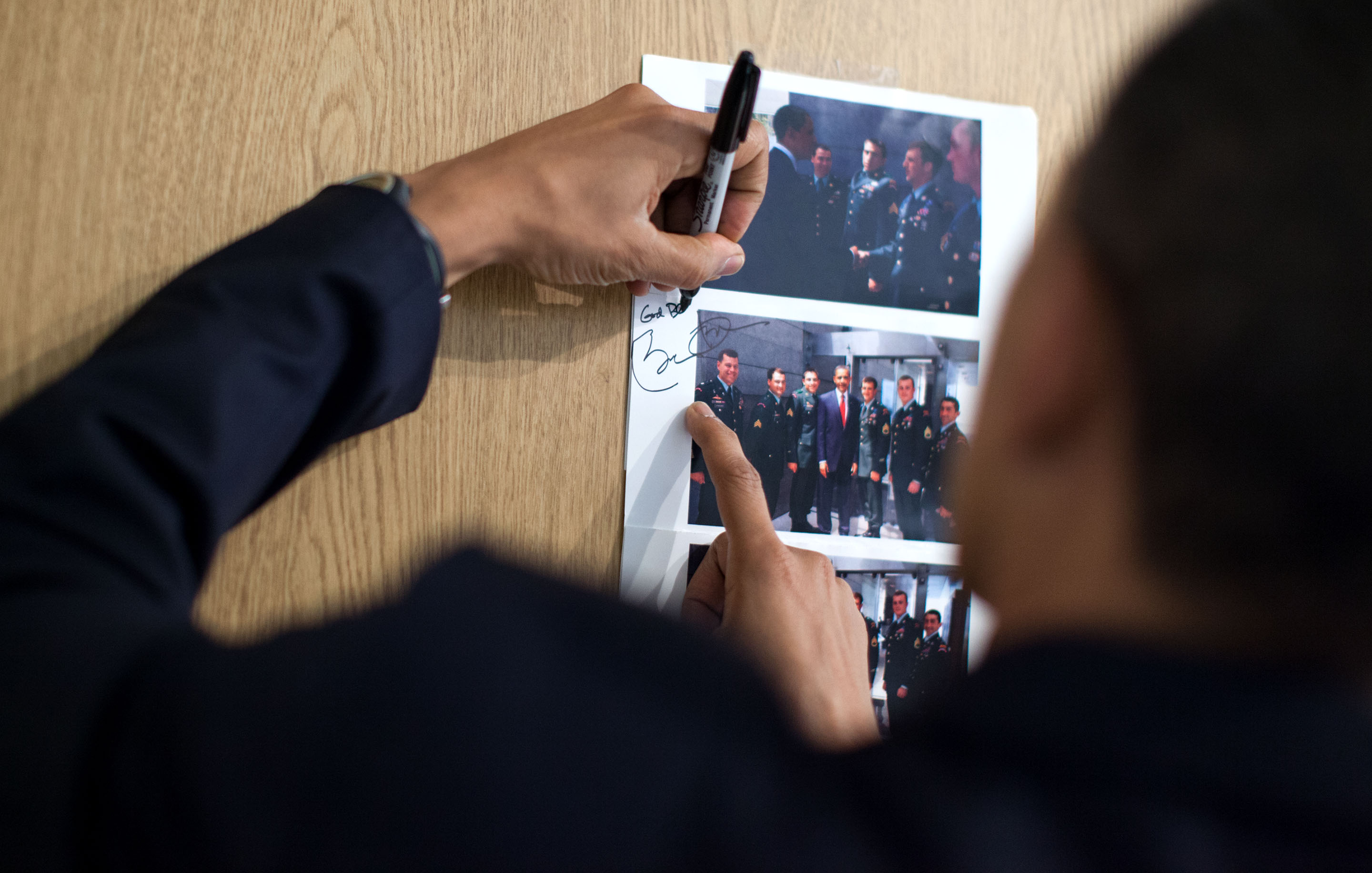 Feb. 28, 2010: The President signs a photo for Cory from their Normandy greeting. (Official White House Photo by Pete Souza) 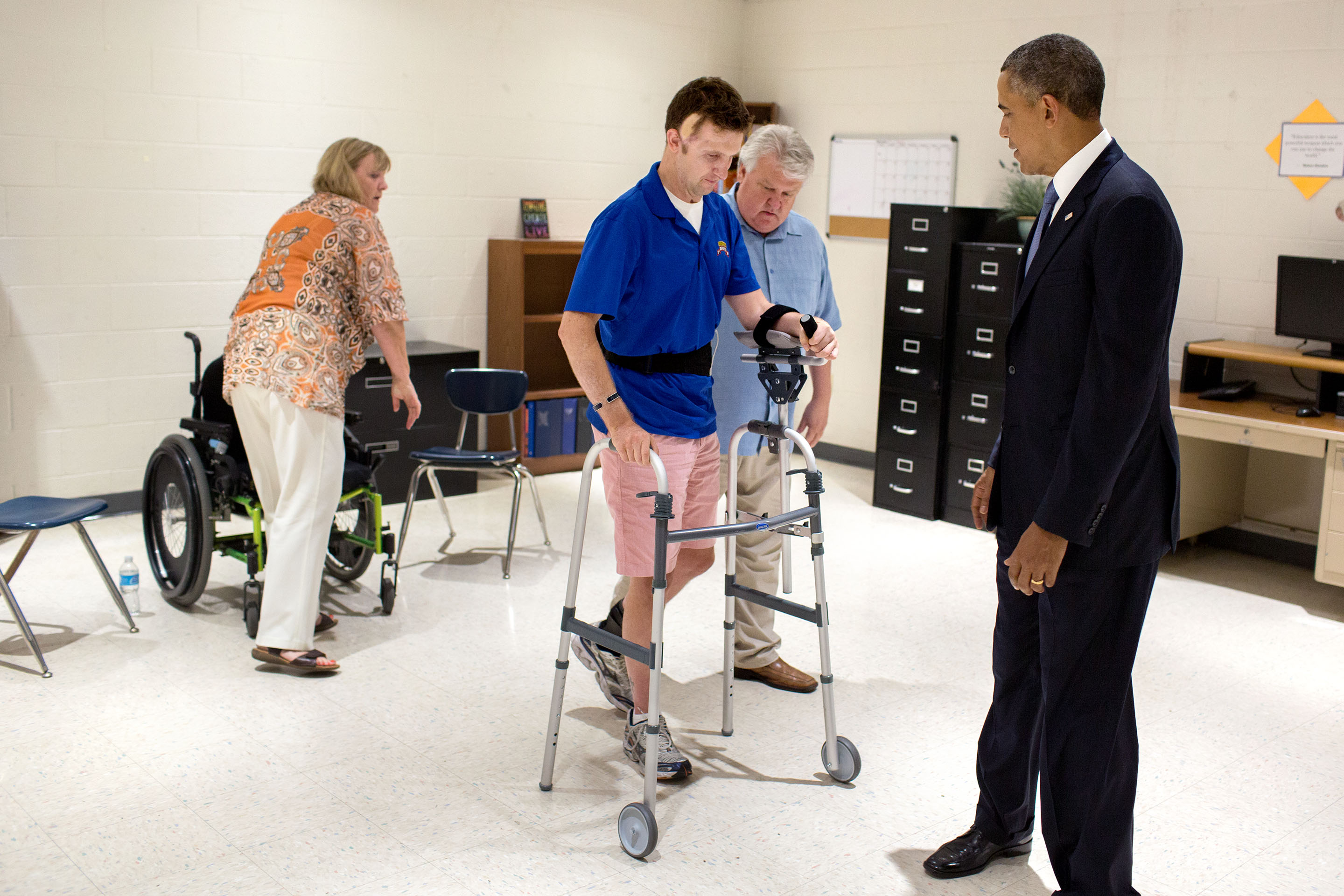 Aug. 6, 2013: Cory walks across a classroom as the President watches in Arizona. (Official White House Photo by Pete Souza) 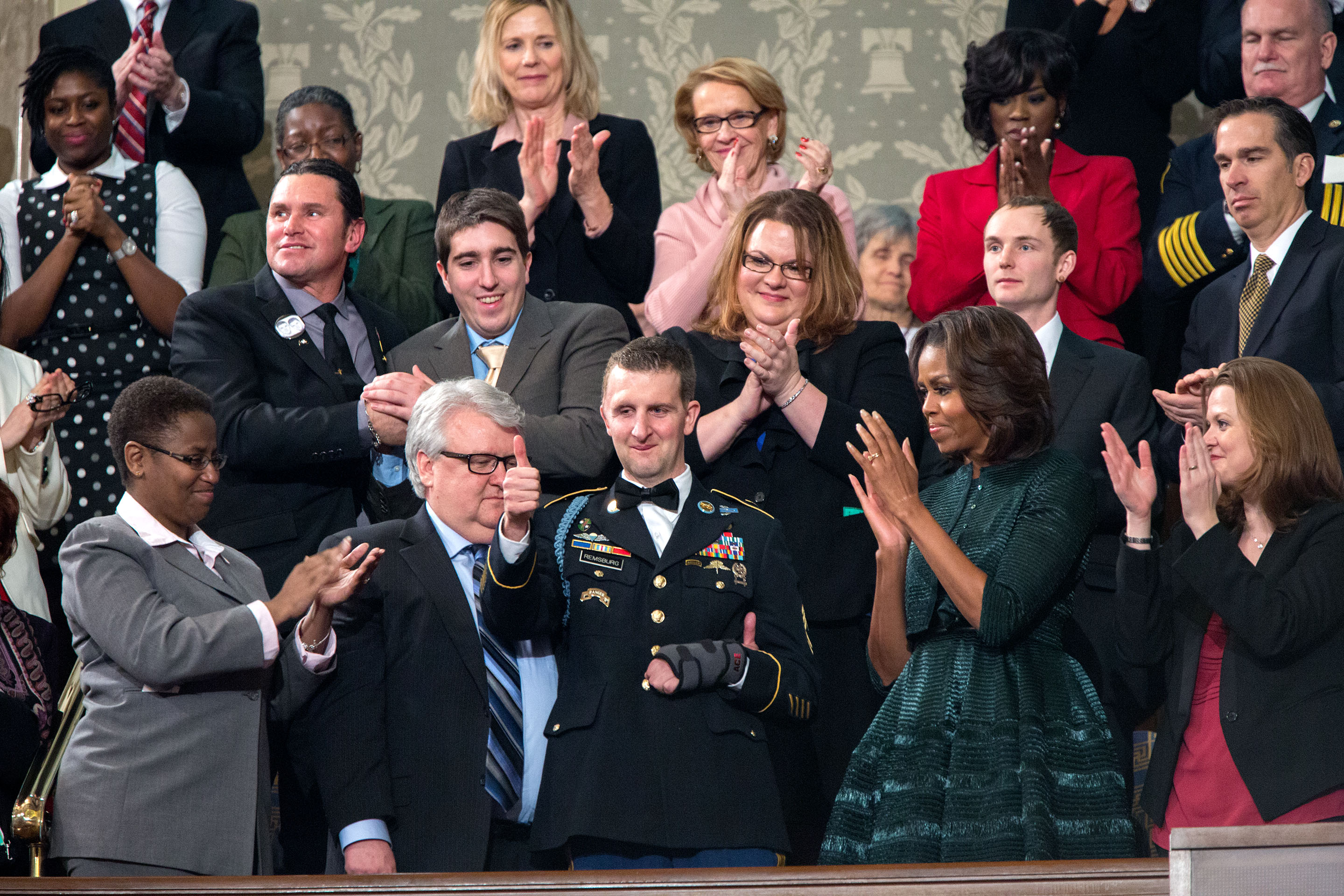 Jan. 28, 2014: Cory reacts after the President paid tribute to him during the State of the Union Address. (Official White House Photo by Pete Souza) 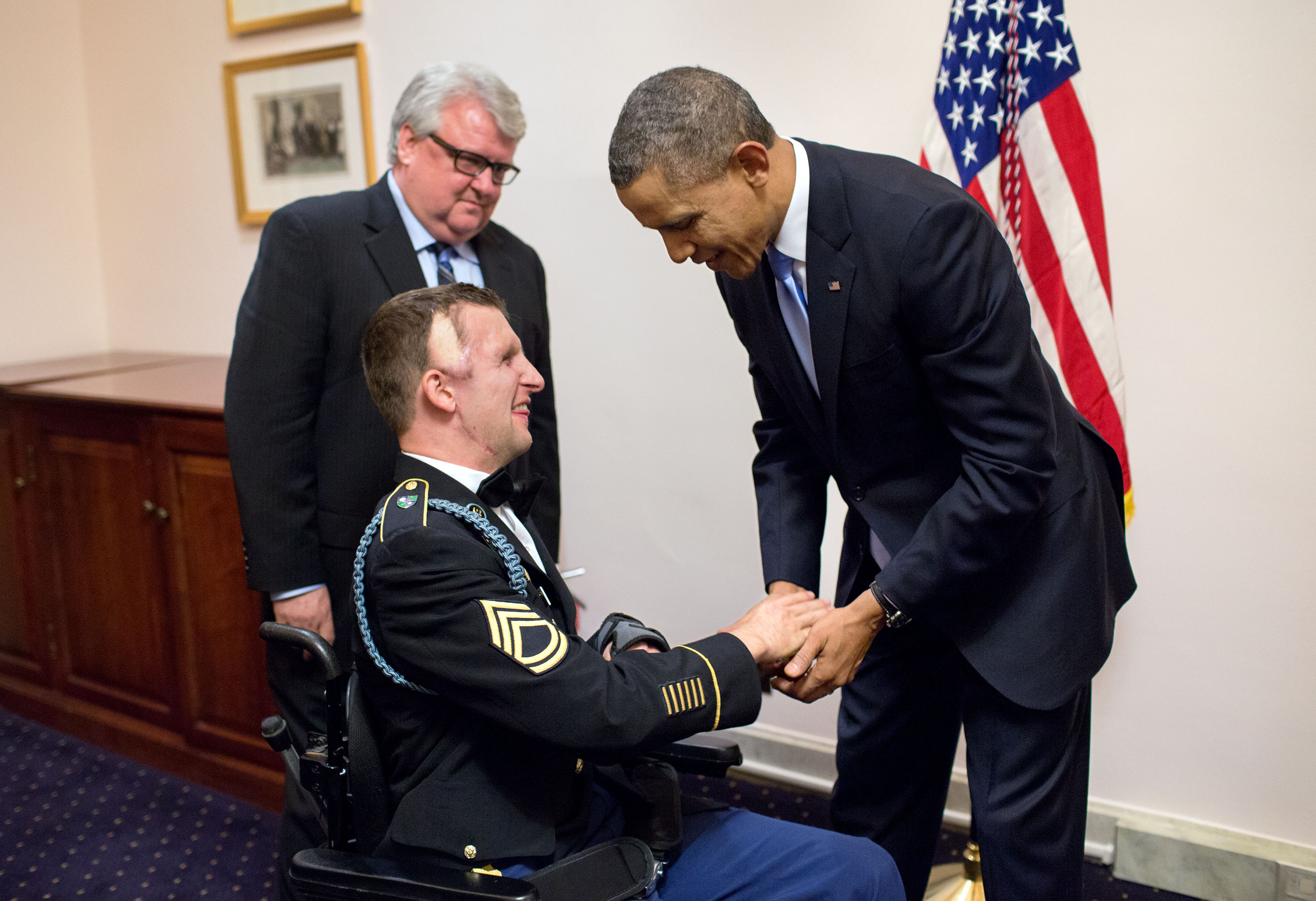 Jan. 28, 2014: Cory, with his father Craig, gives a Ranger Challenge Coin to the President following his State of the Union address. (Official White House Photo by Pete Souza) 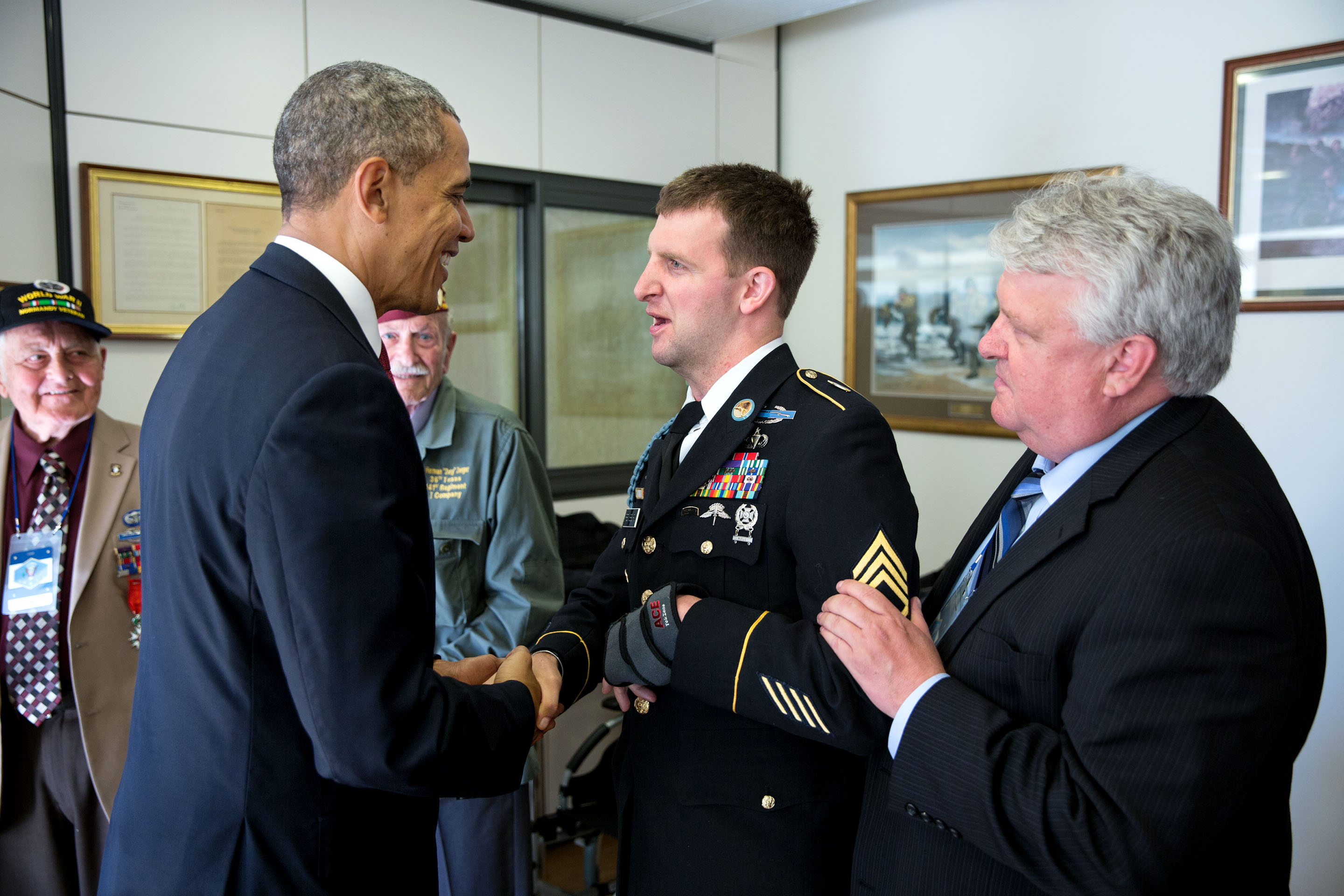 June 6, 2014: The President greets Cory and his father Craig and U.S. WWII veterans prior to the 70th anniversary of D-Day in Normandy. (Official White House Photo by Pete Souza) 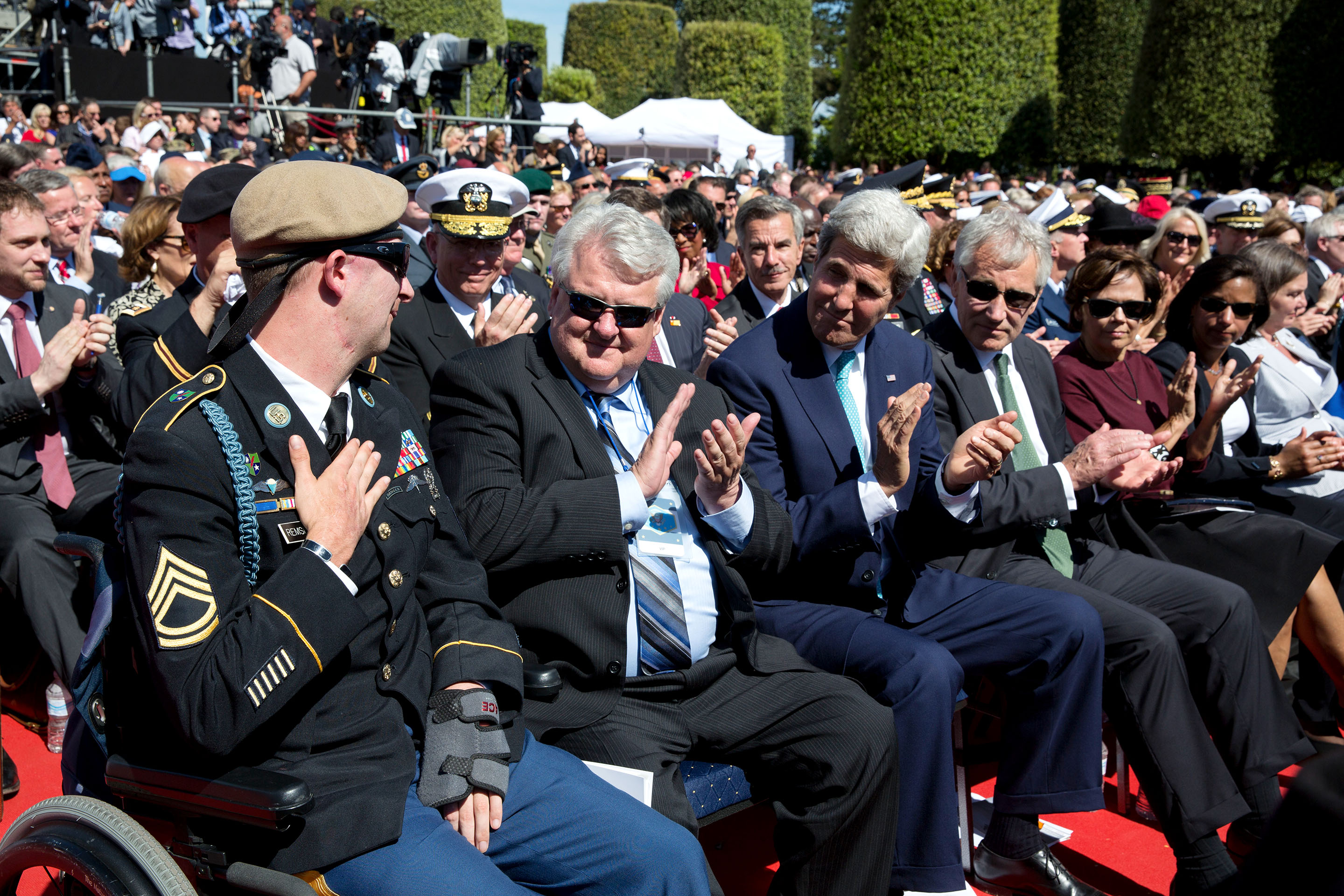 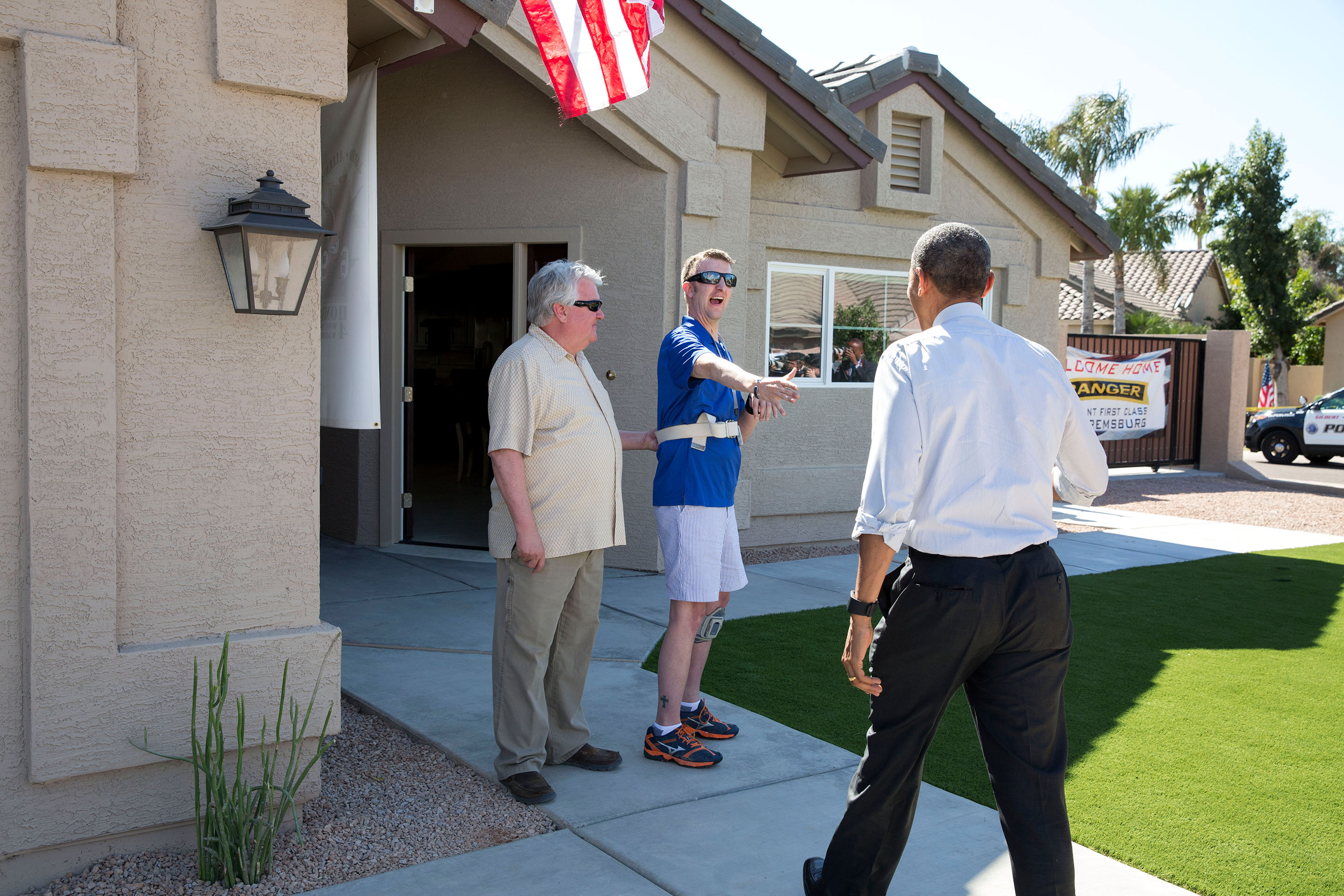 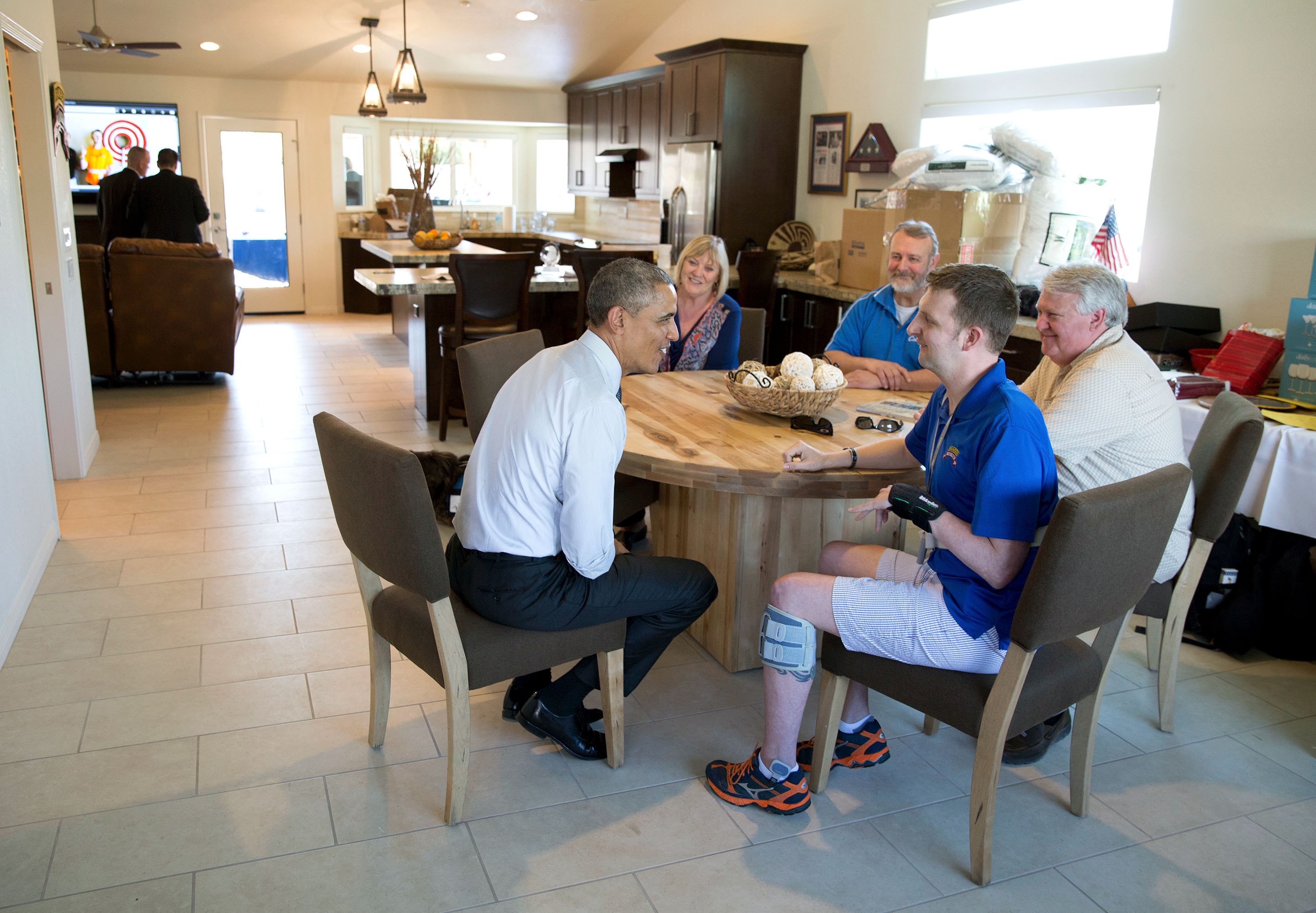 March 13, 2015: President Obama visits with Cory and his family at the kitchen table. (Official White House Photo by Pete Souza) 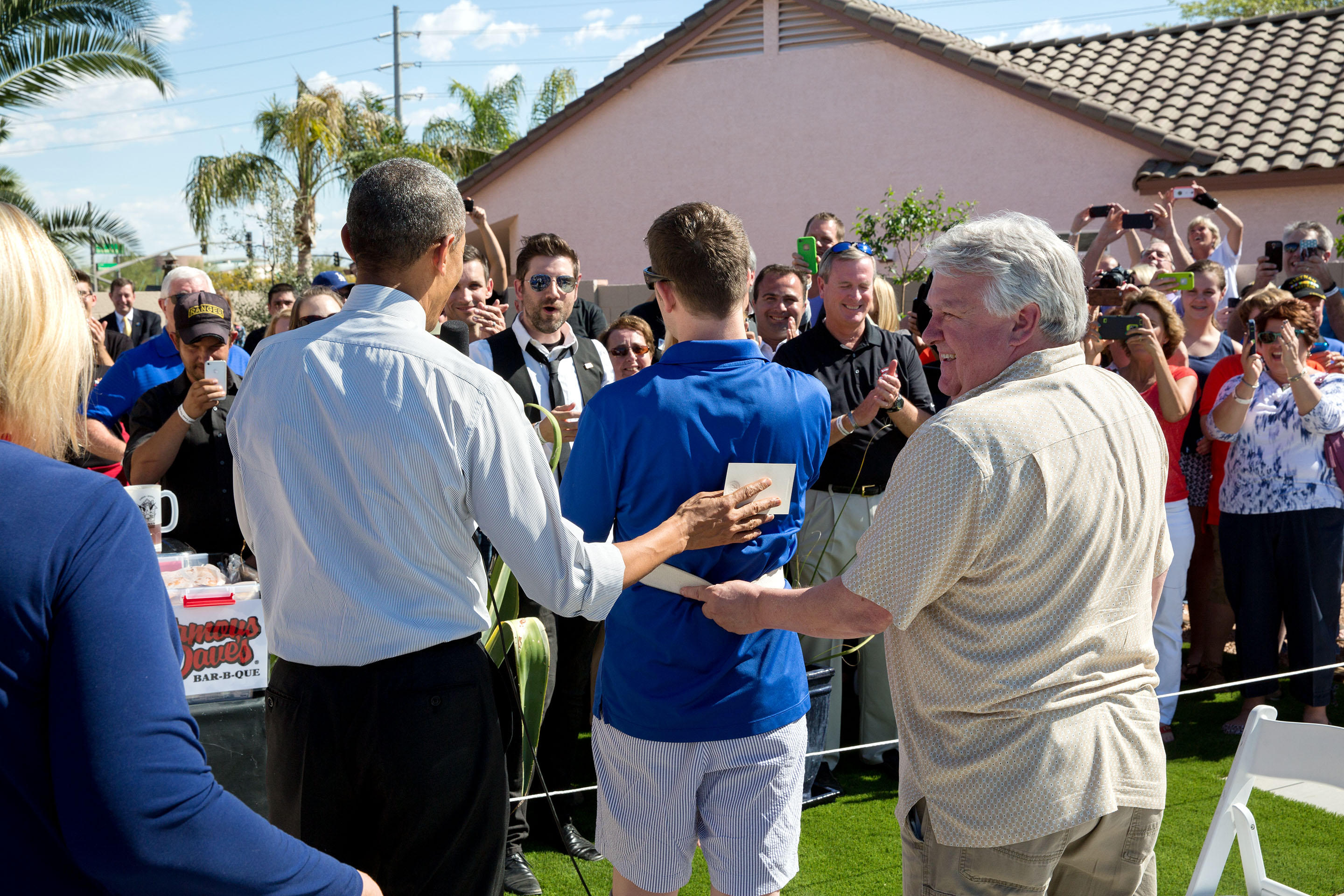 March 13, 2015: The President, Cory and his father Craig greet neighbors, volunteers and donors in the backyard of his home, which was purchased by the Army Ranger Lead the Way Fund and renovated with the help of Jared Allen's Homes for Wounded Warriors. (Official White House Photo by Pete Souza)