June 5, 2015 at 9:30 AM ET by Jason Furman
Twitter Facebook Email
Summary:
The economy added 280,000 jobs in May — the strongest month of the year so far — as wages continued to rise and the participation rate ticked upward. We have now added 5.6 million jobs over the past two years, the best two-year job growth since 2000.

The economy added 280,000 jobs in May—the strongest month of the year so far—as wages continued to rise and the participation rate ticked upward. We have now added 5.6 million jobs over the past two years, the best two-year job growth since 2000. Although the job market has made considerable progress throughout this recovery, challenges remain for our economy and there is more work to do. The President is committed to building on the positive trends through a comprehensive agenda to boost employment and wages for the middle class, including urging Congress to take important action such as opening new markets for U.S. goods and services through expanded trade, increasing investments in infrastructure, providing relief from the sequester, and raising the minimum wage.

FIVE KEY POINTS ON THE LABOR MARKET IN MAY 2015

1. The private sector has added 12.6 million jobs over 63 straight months of job growth, extending the longest streak on record. Today we learned that private-sector employment rose by 262,000 in May. Our businesses created more than 200,000 jobs in fourteen of the past fifteen months—the first time that has happened since 1995. On the whole, our economy has added 3.1 million new jobs over the past twelve months, just off the fifteen-year high achieved in February. 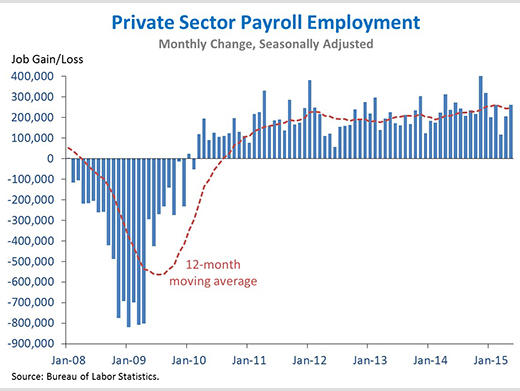 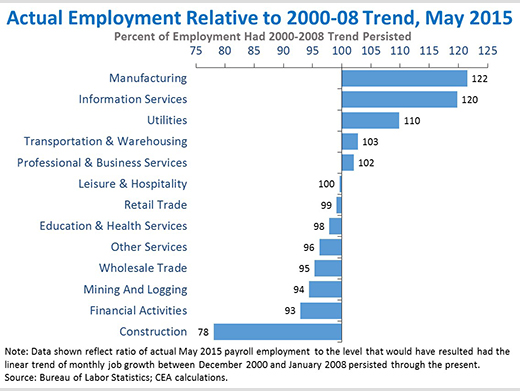 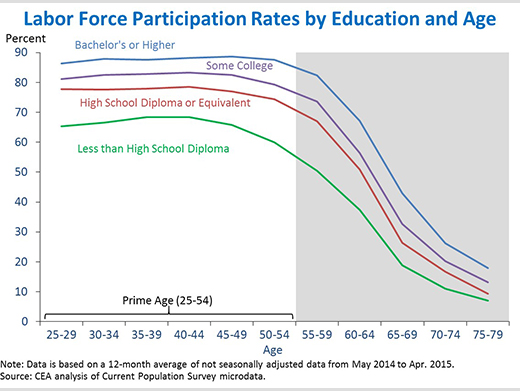 4. The distribution of job growth across industries in May was highly consistent with the pattern observed over the past year. One way to evaluate whether the composition of job growth is in line with recent trends is to consider the correlation between the most recent one-month percent change and the average percent change over the last 12 months across various industries. Looking across the 17 industries shown in the next point, the correlation between the May change and the average percent change over the last 12 months was 0.90, suggesting that the distribution of employment gains last month was very much in line with recent trends, albeit shifting up in most sectors, reflecting the stronger overall job growth in May. Indeed, this month saw the highest correlation of monthly and annual employment changes since January 2009. From 2008 on, this correlation has averaged 0.60. It therefore appears that employment growth in May generally followed the sectoral pattern of the last twelve months. 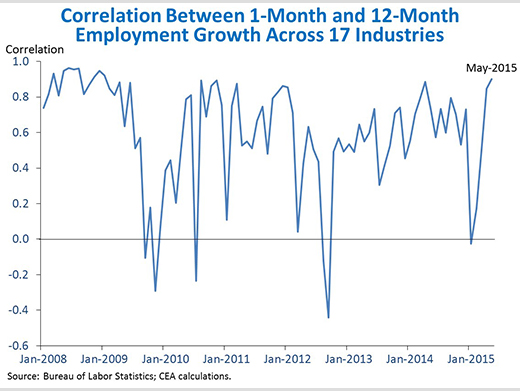 5. The majority of industries experienced stronger job growth in May than they have on average over the past year. Although the distribution of job growth generally followed recent patterns, in some cases it was a little above or below recent norms. May was an especially strong month for leisure and hospitality (+57,000), government (+18,000), health care and social assistance (+58,000), private educational services (+17,000), and temporary help services (+20,000). May was a weaker than usual month in mining and logging (-18,000), wholesale trade (+4,000), and information services (-3,000). In fact, May was the fifth consecutive month of declining mining and logging employment, likely reflecting cutbacks in oil production. 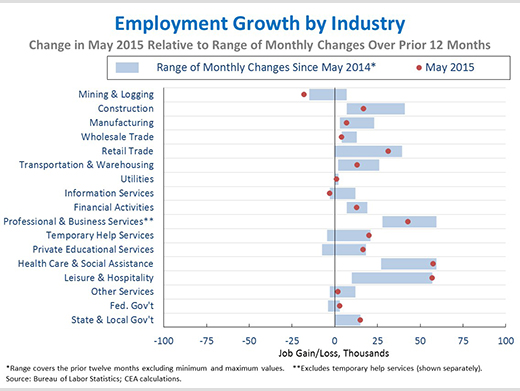