This week, CEQ Managing Director Christy Goldfuss and I kicked off the 2015 GreenGov Symposium – an event co-hosted by CEQ and The George Washington University – where we highlighted Federal sustainability achievements and discussed strategies to continue meeting sustainability goals. EPA Administrator Gina McCarthy and Navy Secretary Ray Mabus joined us to emphasize the all-hands-on-deck approach that Federal agencies must take to address climate change.  We were also joined by GW faculty and staff as well as expert panelists from Federal agencies, private companies, and nonprofit organizations. The participants shared best practices for a variety of sustainability fields, including clean energy, vehicle fleet management, and energy efficiency. 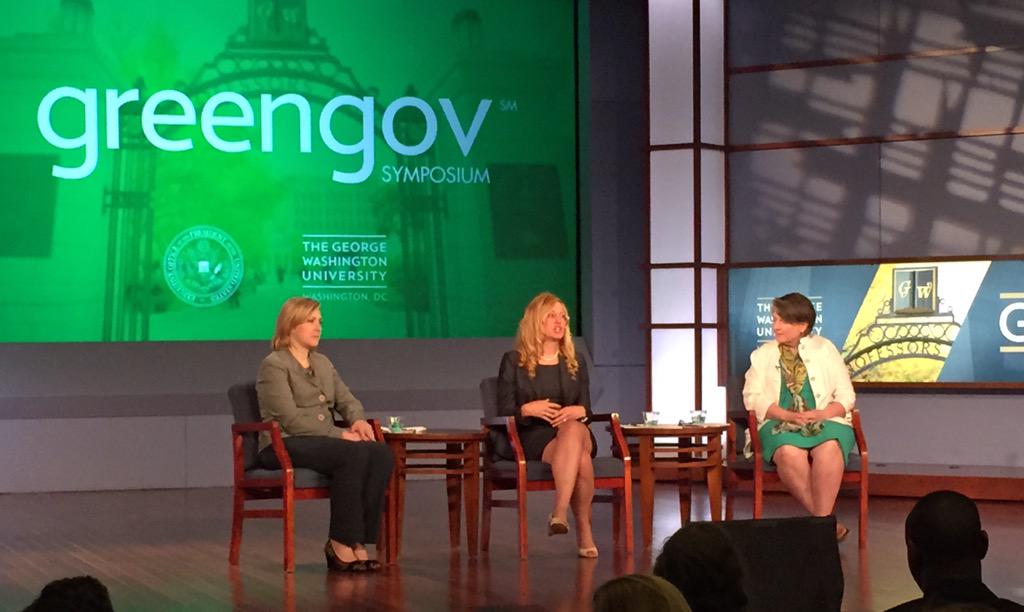 And there was good news to share.  This week, agencies released their 2014 Agency Sustainability Scorecards. The scorecards show that Federal agencies have reduced greenhouse gas emissions by 17.4 percent from 2008 levels. This is the equivalent of taking about 1.9 million cars off the road— roughly the same number of cars registered in the state of Maryland.  Agencies have also reduced water use by 21 percent since 2007 and get nine percent of their electricity from renewable sources.

For more on how we've achieved this progress, check out the Feds at Work video here.

All of this means we're on track to meet the aggressive new goals President Obama established in March. And agencies aren't stopping there. At the Symposium, the General Services Administration unveiled plans to bring up to 3 megawatts of solar energy to 18 Federal buildings in Washington D.C. In addition, Secretary Mabus announced the Navy’s plan for a project that will bring an estimated 6-8 megawatts (MW) of solar power to Joint Base Anacostia-Bolling, also located in Washington D.C. These projects are a part of the Capital Solar Challenge, which the Administration launched last year to deploy more solar energy at Federal locations across the National Capital Region.

We also announced that 72 MW of solar has already been deployed on Department of Defense (DOD) privatized housing. To encourage additional deployments, DOD is partnering with CEQ to launch the DOD Privatized Housing Solar Challenge. Through the Challenge, we'll work with privatized housing developers to increase the amount of solar energy generated on privatized military housing through the end of 2016.

Beyond renewable energy, we also announced that the White House has updated its vehicle fleet to include more fuel efficient and alternative fuel vehicles. These new vehicles will reduce GHG emissions by roughly 40% from 2014 levels and optimize the White House fleet composition.

President Obama is committed to taking action on the global threat of climate change. The GreenGov Symposium made clear that Federal agencies will continue to lead by example to meet that commitment and do their part to ensure ensure a cleaner, safer, and healthier planet for future generations.