MAP: What Does Trade Adjustment Assistance Mean for Workers in Your State?

June 12, 2015 at 9:00 AM ET by Tanya Somanader
Twitter Facebook Email
Summary:
Check out the map from the Department of Labor to see how many workers have been certified to receive job training and other TAA benefits since October 2009 in each state.

What is Trade Adjustment Assistance (TAA) and why should you care if Congress fails to reauthorize it?

Jessica, a Eugene, Oregon native, worked in the stockroom managing inventory, pulling work orders, and performing quality control. After four years of employment, she was laid off due to foreign competition. She called the TAA program, was among a group of workers certified as eligible to apply for assistance, and was soon determined eligible for TAA benefits and services.

"The team I am now a part of is beyond helpful," she said. "I would not be where I am now if it weren’t for the incredible opportunity I had through TAA. I am a better woman, mother, wife, and employee because of this experience!”

For more than 40 years, TAA has helped support U.S. workers who are adversely affected by globalization and trade by providing job training support, career counseling, wage supplements for older workers, job search and reallocation allowances, and income support for workers in training programs.

It has served as a lifeline for more than 2.2 million workers across all 50 states. In just the past six years, the TAA program has made income support and job training benefits available to hundreds of thousands of American workers.

Check out the map below from the Department of Labor to see how many workers like Jessica have been certified to receive job training and other TAA benefits since October 2009 in each state: 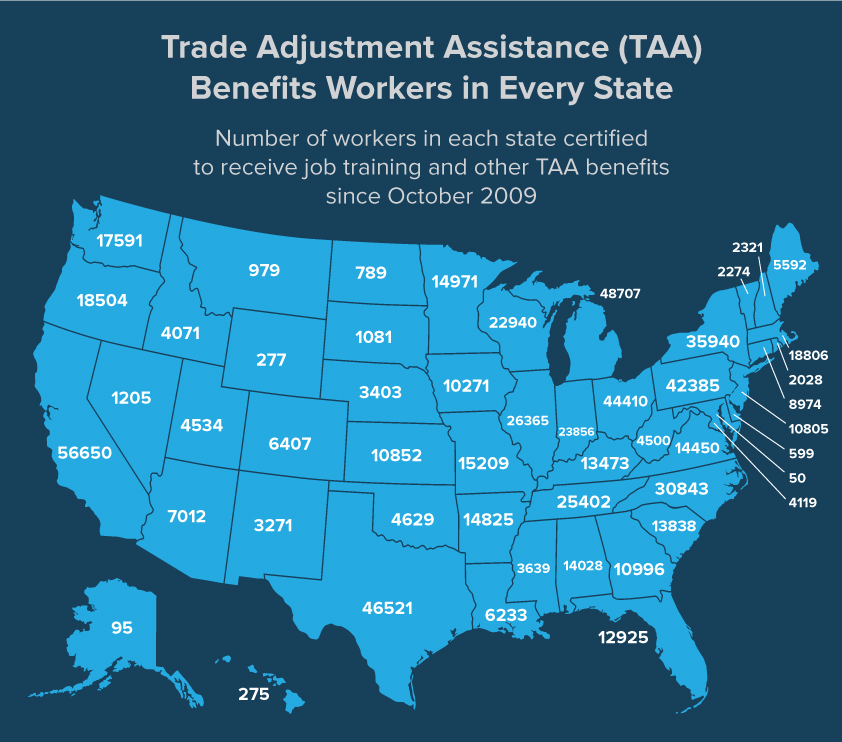 The TAA program works. In the most recent fiscal year, nearly 77 percent of participants found employment within six months of program completion, and nearly 90 percent of those who found work were still employed six months later.

However, the current program is not expansive enough to cover all displaced workers who need support to retool and transition into a new job. In fact, an estimated 17,500 workers have been shut out of the current, inadequate program since expansions in the TAA program lapsed at the beginning of 2014. If Congress reinstates those expansions by passing the TAA bill today, these workers would automatically be reconsidered for TAA benefits. If the House votes down the bill, these workers will be left without the opportunity to take advantage of the program.

Learn more about Trade Adjustment Assistance and why Congress must act to reauthroize it for American workers here.