June 22, 2015 at 6:03 PM ET by Rhett Buttle
Twitter Facebook Email
Summary:
The LGBT community has contributed so much to the rich tapestry of our history, and over the past few years, we have taken historic steps to protect the health and well-being of our family, friends and fellow Americans who are lesbian, gay, bisexual or transgender.

Ed. note: This is cross-posted on the U.S. Department of Health and Human Services' blog. See the original post here.

Danny Garvin was a twenty-year-old living in New York City when he saw something happening at the Stonewall Inn. Over the next six days, he would be drawn into the riots that would inspire a generation of Americans to mobilize for equal rights for lesbian, gay, bisexual and transgender individuals. He later described those June days in 1969 as the moment where “we became a people.”

“All of a sudden, I had brothers and sisters,” he said, “which I didn’t have before.”

Danny Garvin passed away just this December, but every June we carry on his legacy, and the legacy of the countless men and women who made a stand for equality. During Pride month, we remind our LGBT friends and family that we are one American family.

The LGBT community has contributed so much to the rich tapestry of our history, and over the past few years, we have taken historic steps to protect the health and well-being of our family, friends and fellow Americans who are lesbian, gay, bisexual or transgender.

Before the Affordable Care Act, too many Americans were denied access to health coverage, faced prohibitive costs for preventive services, or were priced out of coverage based on gender or sexual orientation.

But today, after our second successful Open Enrollment, we have seen the largest drop in the uninsured in forty years. Millions of Americans, many of them part of the LGBT community, have affordable, quality health coverage for the first time in years.

And thanks to protections provided by the Affordable Care Act, insurance companies can no longer deny health coverage or charge higher premiums based on sexual orientation or gender identity. Your gender and who you love are no longer preexisting conditions.

But we realize that there is more work ahead. Just last week, Secretary Burwell and I met with a group of over 20 LGBT advocates to discuss how we can continue to make more progress. 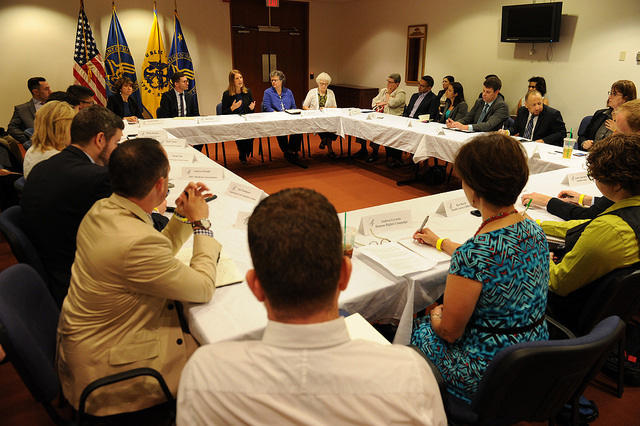 Secretary of Health and Human Services Sylvia Burwell hosts a roundtable of more than 20 LGBT advocates to discuss how we can continue to make more progress for the LGBT community, June 19, 2015.

A recent report from HHS found that LGBT adults in poverty face many challenges to getting health coverage. Fortunately, there are organizations in cities and towns across the country, including many Navigators for the Marketplace, who are working hard to help people in the LGBT community get access to the coverage they need.

At HHS we’re also trying to find new ways to reach LGBT Americans who face the fight against HIV and AIDS.

That’s why, in conjunction with President Obama’s HIV Care Continuum Initiative, the National HIV/AIDS Strategy, and the Digital Government Strategy, we recently launched Positive Spin, a digital educational tool that tells the personal stories of five HIV-positive, gay black men. Through new digital storytelling techniques, we hope that these inspiring tales of men who successfully navigated the HIV care continuum will inspire others to get started on their own journey of care and treatment.

Our goal at HHS is to improve the health and well-being of all Americans, regardless of who they are or who they love. We will keep fighting to reduce health disparities for our LGBT friends, family members, and neighbors, work to protect our LGBT young people from bullying and discrimination, and ensure that our nation’s best medical treatments are as widely available as possible. I hope that you will join us in celebrating the LGBT community during this Pride Month, and join us in the work to make our society healthier and equal for all Americans. ​​​

Rhett Buttle is Director of Private Sector Engagement & LGBT Liaison to the HHS Office of the Secretary.