June 23, 2015 at 3:34 PM ET by Stephanie Santoso and Quincy Brown
Twitter Facebook Email
Summary:
From June 12-18, individuals of all ages and backgrounds celebrated a National Week of Making: at the White House, in our Nation's capital, and beyond. 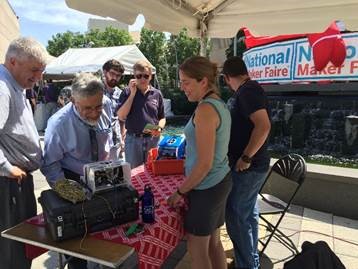 This week, Americans of all ages and backgrounds celebrated a National Week of Making, which President Obama proclaimed for June 12-18. The week coincided with the one-year anniversary of the first-ever White House Maker Faire, when the President issued a call to action for individuals and organizations to “lift up makers and builders and doers across the country.” The Week was an opportunity for communities nationwide to highlight local examples of innovation and hands-on learning of STEM, arts, and design. Makers nationwide are using these skills to develop and scale up creative new products and solutions to solve local and global challenges.

Read on to learn more about how the National Week of Making was celebrated here at the White House, in our Nation’s capital, and beyond.

To kick off the National Week of Making, the White House hosted an event on June 12 to celebrate the large number of new and expanded initiatives announced by Federal agencies, foundations, educational institutions, companies, libraries, and museums to broaden participation in making by increasing access to needed tools, technologies and resources. The event featured an amazing group of makers, including Breanna Isaac, a member of the Choctaw Central High School Solar Car Team that took top honors at the national Solar Car Challenge this year; 10-year-old Aiden Robinson, who worked with designer Coby Unger to create his own customized prosthetics; and many others.

The White House event built off of the National Maker Faire, which was hosted by a coalition of organizations – including NationOfMakers.org, Maker Media, and others – in Washington, D.C. on June 12-13. The Faire reflected the diversity of making throughout the country, and included the participation of makers from 40 different states and 18 Federal agencies, ranging from the National Science Foundation and the U.S. Agency for International Development to the U.S. Navy and Army and the National Institutes of Health.

Thousands of students, families, and adults attended the Faire, including a number of senior officials from the White House. U.S. Chief Technology Officer Megan Smith joined makers Makeda Stephenson and Brit Morin in a fireside chat focused on engaging girls and women in making as pathways to careers in STEM and entrepreneurship. Other notable faces at the Faire included Dr. John Holdren, Assistant to the President for Science and Technology and Director of the White House Office of Science and Technology (OSTP), and Tom Kalil, OSTP’s Deputy Director of Technology and Innovation, both of whom met many innovative makers and checked out projects ranging from an energy-harvesting rocking chair to low-cost technologies aimed at improving quality of life in the developing world, such as a biomass cookstove that reduces emissions while generating electricity. 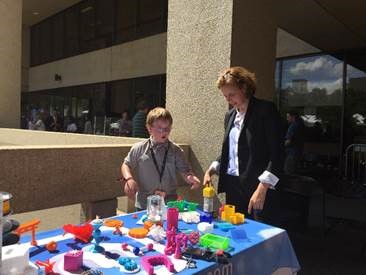 Perhaps one of the most inspiring parts of the National Maker Faire was the HBCU Making for Change Showcase, an initiative developed by the United Negro College Fund, the Association for Public and Land Grant Universities and the White House Initiative on HBCUs. The Showcase, with support from the National Science Foundation, gave 40 students from nine HBCUs (Historically Black Colleges and Universities) the opportunity to demonstrate innovative solutions that the students had developed to help address community-based problems: solutions like a sensor-based device to detect food toxicity, or a smartphone case designed to encourage members of the African-American community to adopt healthier, more active lifestyles. 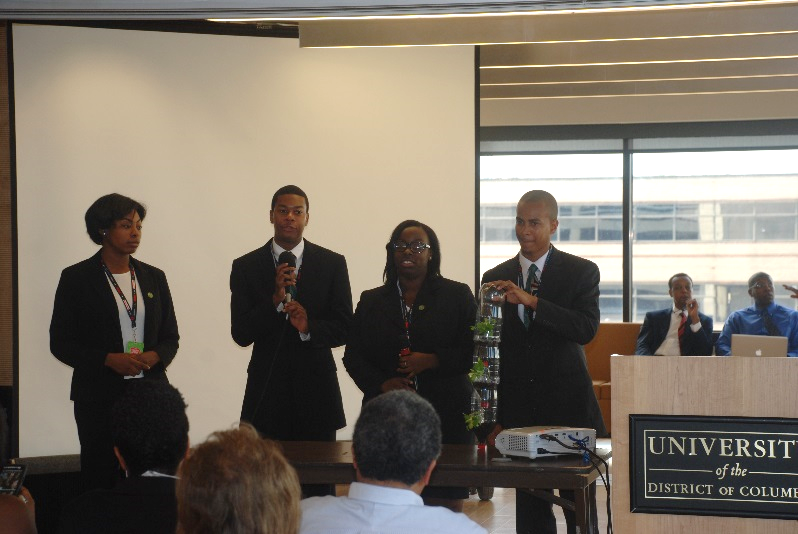 On June 15, more than 50 school leaders from across the country, including superintendents, a host of educators and other champions of making in K-12 education gathered at the White House to discuss making in their school districts. These school leaders submitted joint and individual letters to the President making a commitment to expanding access to making for their students by doing things such as supporting the development of more maker spaces and creating additional maker-focused professional development opportunities for teachers. This campaign to expand making in schools is organized by Maker Education Initiative, Digital Promise and the AASA – The Superintendents Association.

Making Activities and Events Around the Country

Organizations and individuals nationwide also hosted a large number of events and activities in their communities during the National Week of Making. The Billings Public Library in Montana organized collaborative engineering projects for kids and teens, as well as a workshop for families to record previous experiences of making together. East Central High School in San Antonio, TX offered an electronics and hardware programming course, while the Muncie Public Library in Indiana sponsored a series of courses focused on designing, prototyping, and building things that fly. On June 18, the last day of the National Week of Making, the New York Hall of Science, which has a rich history of integrating making, building, and tinkering into its exhibits and programming for students, families, and educators, hosted a celebration commemorating its 50th anniversary. OSTP’s Dr. Holdren was there to give remarks, marking a successful end to a successful Week.

In his Proclamation for the National Week of Making, President Obama asked our Nation to “renew our resolve to harness the potential of our time -- the technology, opportunity, and talent of our people -- and empower all of today's thinkers, makers, and dreamers.” The National Week of Making was a great step in answering this call to action. But we hope you’ll join us in our efforts to get people thinking, doing, and making for not just seven days, but every day.

Stephanie Santoso is Senior Advisor for Making at the White House Office of Science and Technology Policy.

Quincy Brown is an AAAS Science & Technology Policy Fellow at the National Science Foundation and a member of the National Maker Faire production team.