States and Cities Taking Action on the Minimum Wage

June 24, 2015 at 10:36 AM ET by Jerry Abramson
Twitter Facebook Email
Summary:
Governor Gina Raimondo just signed a bill that will raise the minimum wage for Rhode Islanders. Governor Raimondo’s signature continues a trend of local governments and communities helping those who work hard day-in and day-out to put food on their tables and a roof over their heads.

Since his first day in office, President Obama has put working families at the top of his agenda. In the State of the Union this year, he reinforced his commitment to helping working Americans lead productive and successful lives, from encouraging Congress to enact paid sick leave, to asking Republicans and Democrats alike to raise the minimum wage. Traveling across the country, the President knows that in too many households, moms and dads struggle to make ends meet for their families – even when they’re working full-time jobs.

While waiting for action from Congress, the President has been leading by example. In February 2014, President Obama signed an Executive Order to raise the minimum wage for individuals working on new federal service contracts, because, as the President said, “if you cook our troops’ meals or wash their dishes, you shouldn’t have to live in poverty.”

But, as many in state and local government know, it can take time for Washington to act. As a dad and former Mayor for two decades, I know that families can’t wait. Communities can’t wait.

That’s why it’s great that states, cities, and counties are taking action, passing initiatives that will lead their communities into the 21st century.

On Monday, Governor Gina Raimondo signed a bill that will raise the minimum wage for Rhode Islanders. Governor Raimondo’s signature continues a trend of local governments and communities helping those who work hard day-in and day-out to put food on their tables and a roof over their heads. 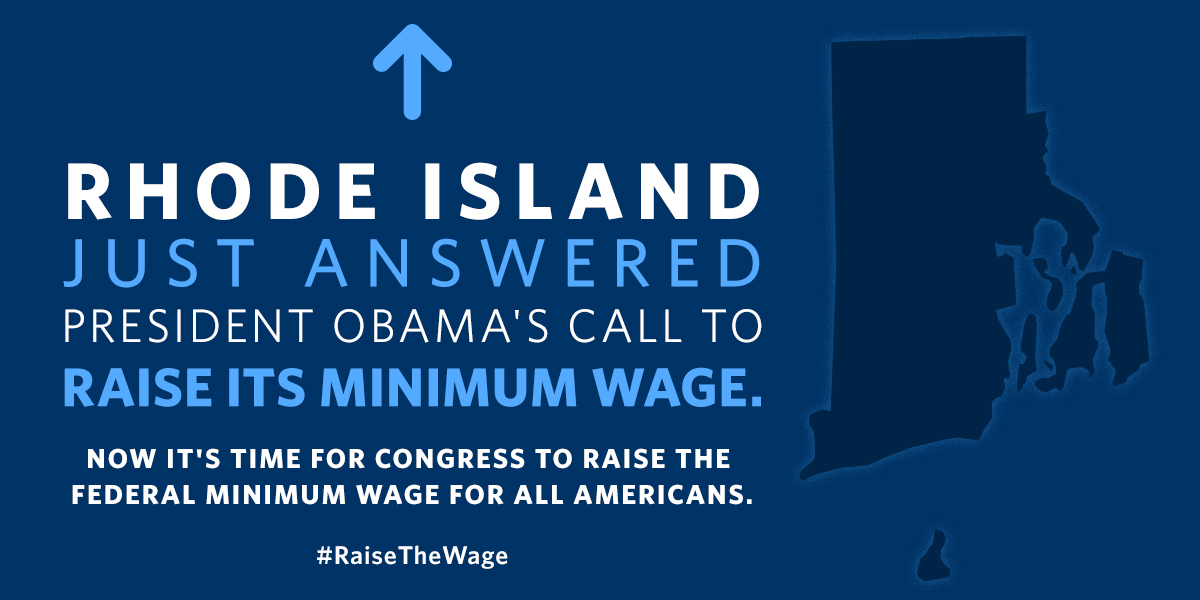 Since January 2013, officials from 17 states and 27 cities and counties have taken action to raise the minimum wage, including Governor Shumlin of Vermont, Governor Malloy of Connecticut, Mayor Slay and Mayor James from St. Louis, MO and Kansas City, MO, Mayor Garcetti from Los Angeles, CA, and county executives in Los Angeles County and Montgomery County, MD."

In his 2014 State of the Union, the President called on elected officials around the country to mobilize to increase wages: “To every mayor, governor, and state legislator in America, I say, you don’t have to wait for Congress to act; Americans will support you if you take this on.”

Governors, mayors, legislators, and county executives have listened. They know that the best movements are built from the ground up, and that the best way to make a city stronger is to make sure working families can make ends meet.  From the first day until the last day, President Obama continues to take the fight for fair wages to states and cities and counties, to make sure we’re doing the most we can to make American workers and American families feel more economically secure.