June 26, 2015 at 5:10 PM ET by David Hudson
Twitter Facebook Email
Summary:
President Obama travels to Charleston, South Carolina to honor the life of pastor and state senator Clementa Pinckney -- one of the nine who lost their lives in the shooting at the Emanuel AME Church in Charleston.

"We are here today to remember a man of God who lived by faith. A man who believed in things not seen. A man who believed there were better days ahead, off in the distance. A man of service who persevered, knowing full well he would not receive all those things he was promised, because he believed his efforts would deliver a better life for those who followed."

Today, President Obama traveled to Charleston, South Carolina to honor the life of pastor and state senator Clementa Pinckney -- one of the nine who lost their lives in last week's shooting at the Emanuel AME Church in Charleston. 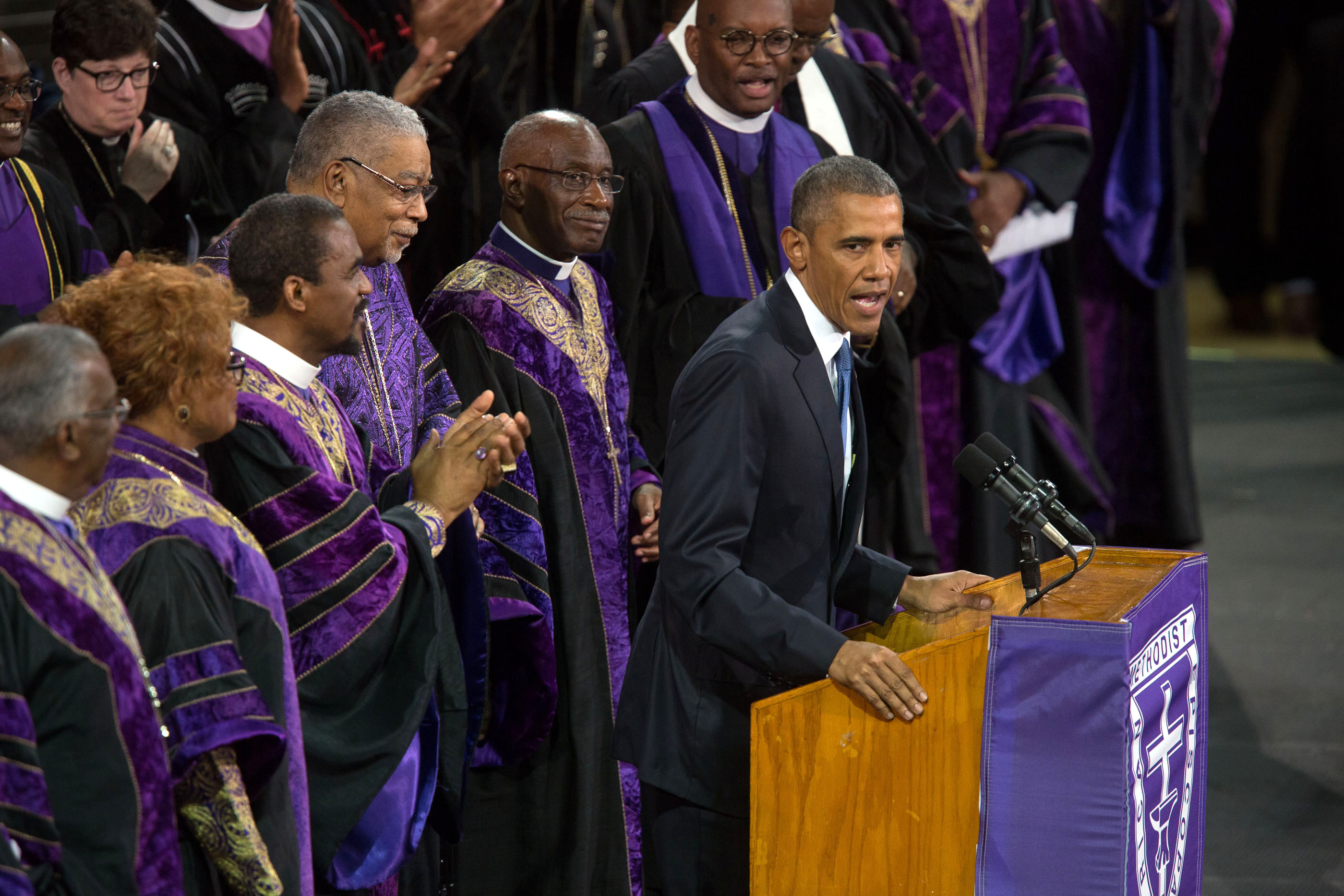 President Barack Obama delivers the eulogy at the funeral of Reverend Clementa Pinckney at the College of Charleston in Charleston, S.C., June 26, 2015. (Official White House Photo by Lawrence Jackson)

In his eulogy, the President highlighted just how much Reverend Pinckney accomplished during his 41 years of life -- being in the pulpit at age 13, a pastor at age 18, and a public servant at age 23.

"He did not exhibit any of the cockiness of youth, nor youth's insecurities," the President said. "Instead, he set an example worthy of his position, wise beyond his years, in his speech, in his conduct, in his love, faith, and purity."

"As a nation, out of this terrible tragedy, God has visited grace upon us, for he has allowed us to see where we’ve been blind."

President Obama emphasized that even in the midst of our sadness, this tragedy has "allowed us to see where we've been blind." It made clear how the Confederate flag has been a "reminder of systematic oppression and racial subjugation." It reminded us how gun violence inflicts a "unique mayhem" on our nation. It spotlighted how past injustices continue to shape our present actions.

"Guard against the subtle impulse to call Johnny back for a job interview, but not Jamal" —@POTUS in Charleston http://t.co/qcUl5NnYQs

"It would be a betrayal of everything Reverend Pinckney stood for," the President added, "if we allowed ourselves to slip into a comfortable silence again -- once the eulogies have been delivered and the TV cameras have moved on."

As the President noted, Reverend Pinckney understood that "justice grows out of recognition of ourselves in each other. That my liberty depends on you being free, too. That history can’t be a sword to justify injustice, or a shield against progress, but must be a manual for how to avoid repeating the mistakes of the past -- how to break the cycle. A roadway toward a better world. He knew that the path of grace involves an open mind -- but, more importantly, an open heart."

Today wasn't simply a funeral service for a pastor and a politician. It was a celebration of life, a reminder of the work we have left to do, and encouragement to keep pushing forward.

“May God continue to shed His grace on the United States of America." —@POTUS http://t.co/14Z3HnNi8v