Delivering on a Dream: The ConnectED Story

June 29, 2015 at 3:28 PM ET by R. David Edelman
Twitter Facebook Email
Summary:
One afternoon in late 2012 the tech and education teams had a few minutes to compare notes. Find out what happened next.

It was one of those impromptu meetings that could only happen in a hallway.

One afternoon in late 2012 the tech and education teams had a few minutes to compare notes. And that day, we realized the same problem had been bugging us all: Internet access in schools was incredibly slow. So slow, in fact, that the average American school had the same connectivity as the average American home -- but served hundreds of times as many people.

We all know slow Internet is the worst -- and it’s doubly frustrating when it’s a matter of kids learning, and not just a given evening’s entertainment.

Slow Internet in our schools meant teachers in separate classrooms couldn’t do something as basic as stream a couple of videos at the same time. It meant that interactive maps or online biology lessons simply wouldn’t load.

So even if a school wanted to invest in a tablet for every child, in our Wi-Fi world, it couldn’t be much more than a backlit textbook. If we didn’t do anything about it, school would become the only place in kids’ lives not being transformed by technology.

For those of us on the economics team, it meant that some of the best innovators didn’t want to turn their talents to education, because it required designing yesterday’s technology. And that meant if we did nothing, the United States -- the country that invented the Internet and is home to the digital revolution -- wouldn’t be able to lead in this global market. That would be a loss for our workforce and our economic future.

Two years ago, the President challenged us to choose another path.

He gave the dream of revolutionizing K-12 education a voce when he announced ConnectED—a challenge to the government, private sector, and educators to make sure that students reap the benefits of the digital world in every classroom. And he made a commitment that high-quality digital learning tools would need to extend far beyond the nation’s wealthiest schools. As the President said, “[i]n a country where we expect free Wi-Fi with our coffee, we should definitely demand it in our schools.” He started by setting some goals. First, he committed to connect 99 percent of students to high-speed broadband and wireless in the classroom within five years. Meanwhile, he said: Let’s cut the price of a tablet or laptop to compete with a textbook and commit to transforming schools to take part in this digital revolution. And finally, he asked companies and philanthropies to dig deep to make sure every student has these opportunities – not just a privileged few.

For two years, the White House team, with the Department of Education, and a coalition of visionary civil society and private sector leaders have helped deliver on President Obama’s dream. We’ve been joined by non-profit leaders who were already gathering data and sounding the alarm bells and many more who have joined. And we’ve come a long way. The numbers tell part of the story: 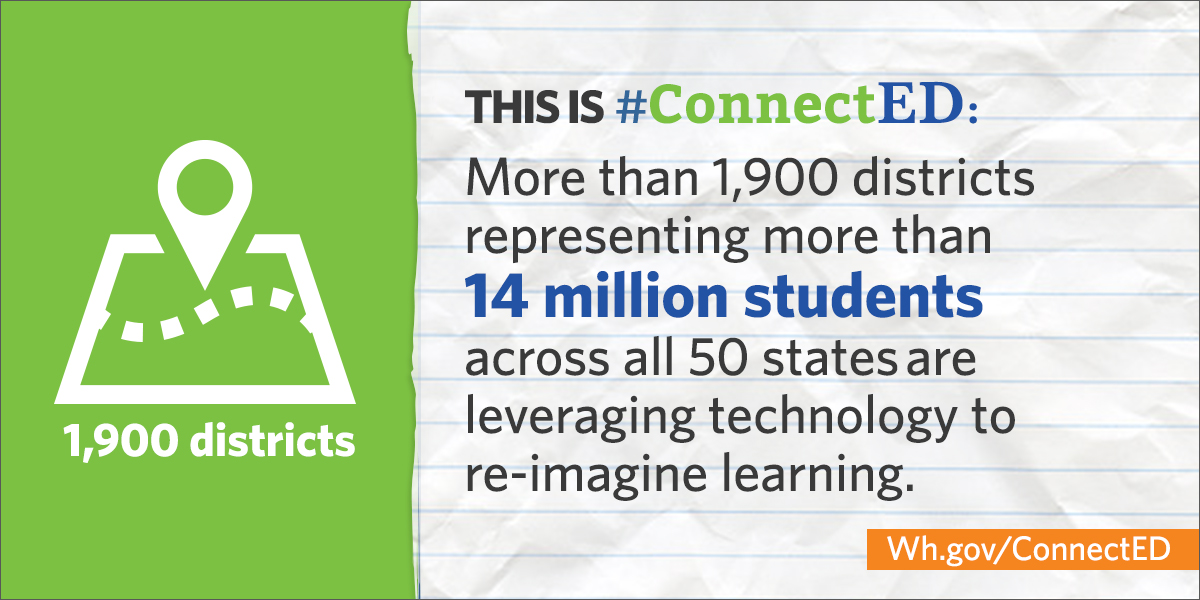 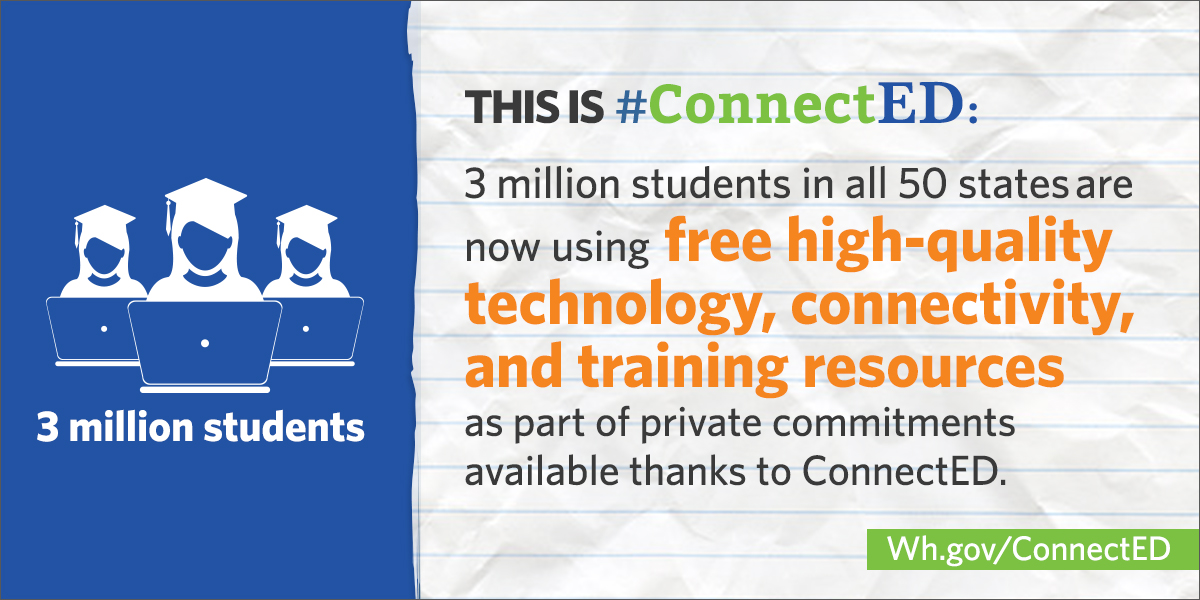 To make it happen, the Federal Communications Commission (FCC) led with way with $8 billion in new funding by modernizing its “E-Rate” program -- and that’s put us on track to connect the schools and upgrade their Internet speeds. The President also announced that another $2 billion will be coming from the private sector in commitments of free technology and training to make use of that new, quality connectivity.

And most important are the superintendents, principals, teachers, and parents who are committed to making it happen — over 14 million of them, in 1,900 districts in all 50 states, and counting.

Where exactly are we seeing that impact? Take a look.

Here’s where, just in the last two months, dedicated funding has gone to upgrade school connectivity.

Here’s how many communities have schools benefitting from that free technology.

And here’s where districts have joined the Future Ready Network to make ConnectED a reality in their schools.

We’re all used to seeing maps dispersing any number of datasets, but think about this one for a second.

Every dot on that map represents another community that can benefit from personalized learning, and more students who can learn at their own pace, get instantaneous feedback, and struggle and succeed, all without fear of embarrassment.

Every dot on that map represents another parent who can be confident that their kids are learning how to use the same software and devices they’ll need to land a high-paying job.

Every dot on that map is another school district that is joining this national movement.

And that matters — for kids today, and for our nation’s future. In just two years, ConnectED has helped accelerate a tipping point in transforming American education. It’s going to take more than wires and wireless to make this vision a reality, but none of it can happen without the infrastructure, resources, and community that ConnectED is helping to build.

So I hope you’ll join us in helping communities around the country upgrade teaching and learning for the 21st century.

R. David Edelman is Special Assistant to the President for Economic & Technology Policy.