On the Other Side of the Camp

June 29, 2015 at 3:15 PM ET by Fatima Noor
Twitter Facebook Email
Summary:
Fatima Noor shares her immigrant story, from her childhood in Somalia to her life in the American South, in honor of Immigrant Heritage Month.

I was born in Somalia, but mostly what I remember are flashes of a carefree child, happily unaware of the world beyond the Utanga Refugee Camp in Kenya. About half a mile from our UNHCR-issued blue tent was the fence that surrounded the camp. Beyond the fence was an endless blue horizon of ocean. And if you stood close enough, on the slight precipice before the fence, you could see where the beach welcomed the waves — its sand, sometimes clear and brightly glistening; other times, dark and dusky, casting sad grayish hues. It felt abandoned and desolate. I never saw any people down there. But sometimes I would catch the sight of boats with colorful sails drifting over the waves.

Most of the other children congregated over at the dumpsites and water wells, fashioning toys out of trash and rocks. I kept to myself, a quiet but curious observer exploring the neighborhoods within the camp. I would often come home well past sundown, only to be rightfully scolded by a concerned parent. But those daily, miles-long excursions only left me hungry for more.

Some days on my walks, I would see mischievous schoolboys steal little goodies from the local store, finding themselves chased by the angry words of the elderly storeowner flailing his bakoorat (walking cane). Except the store wasn’t really a store, just a rug over a patch of dirt, neatly displaying unused rations of food along with a few knickknacks.

I would see women grinding wheat with wooden pestles and mortars while quietly humming lullabies to the infants strapped to their bare backs. Sometimes, two women, standing side by side and each holding a pestle, would rhythmically take turns crushing grains of wheat to dusty, powdery flour.

I would hear the chatter across adjacent makeshift kitchens, and the cacophony of radios broadcasting news and music of the neighboring country we recently fled.

But soon, due to a combination of wildfires and overpopulation, our camp was ordered to shut down. My family, like many others, faced tough decisions. One was whether to return to Somalia in the height of civil war. Another was whether to send their small child — me — to live with a relative in a far-off land in hopes of better opportunities.

On our last day at the camp, I watched my parents and brother sail off in one of the colorful boats shuttling the many faces — men, women, and children — who once inhabited this camp, back to Somalia.

Soon, I found myself in a kindergarten class in Denmark. I still remember my very first recess, timidly sitting at the corner of a sandbox. My new classmates were relentlessly curious; I kept staring at the sand, hoping they would go away. I could not understand the words that fluttered past my ears, and etched themselves into my memory to this day: “vil du gerne lege med … vil du være med.”

I went home that day and asked my aunt what those phrases meant. She didn’t know. Learning a new language doesn’t always come easy to adults.

In the first grade, I learned to read and write Danish. Eager to learn new words, I eventually figured out what those taunting sandbox phrases meant: “Would you like to play with us…would you like to join us?”

In the early 2000s, my father made his way out of Somalia, alone. He came to the United States as a refugee. He lived in Texas, but driving trucks gave him the opportunity to explore America’s frontiers: from the snowy Northwest to the humid Southeast. He decided to settle in the latter, and started the paperwork to bring my mother and brothers from Somalia and me from Denmark.

In 2005, my whole family reunited in our new home: Memphis, Tennessee. We soon adapted to Southern living (and yummy Memphis barbecue). We bought a house down by the Mississippi River. My brother even attended the same middle school as Elvis Presley. I graduated from the University of Memphis. 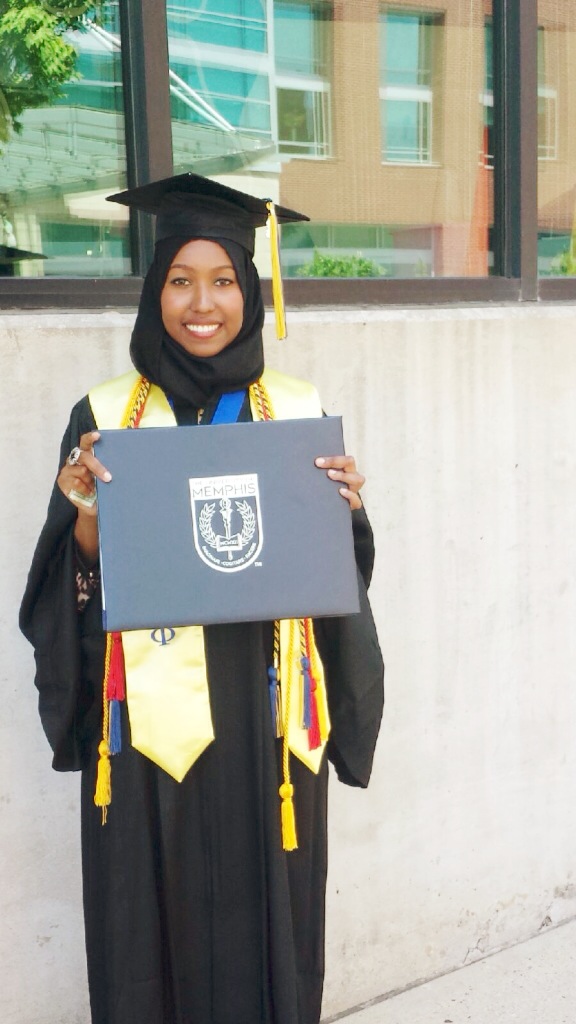 Being the first to graduate from college in my family was extremely challenging but equally rewarding (May 10, 2014)

On the morning of April 29, 2013, I returned to the same auditorium where I had received my high school diploma a few years earlier. Now, I was among 500 people. We each went up on stage, before a panel of immigration judges, and stated our full name and country of origin. We came from more than 30 countries, including Australia, Canada, Eritrea, India, Iraq, Mauritania, Nigeria and Somalia, and that was just in my row.

In the audience, we all stood, raised our right hands and recited the Oath of Allegiance: "I hereby declare, on oath, that I absolutely and entirely renounce and abjure all allegiance and fidelity to any foreign prince, potentate, state, or sovereignty, of whom or which I have heretofore been a subject or citizen; that I will support and defend the Constitution and laws of the United States of America against all enemies, foreign and domestic; that I will bear true faith and allegiance to the same…” 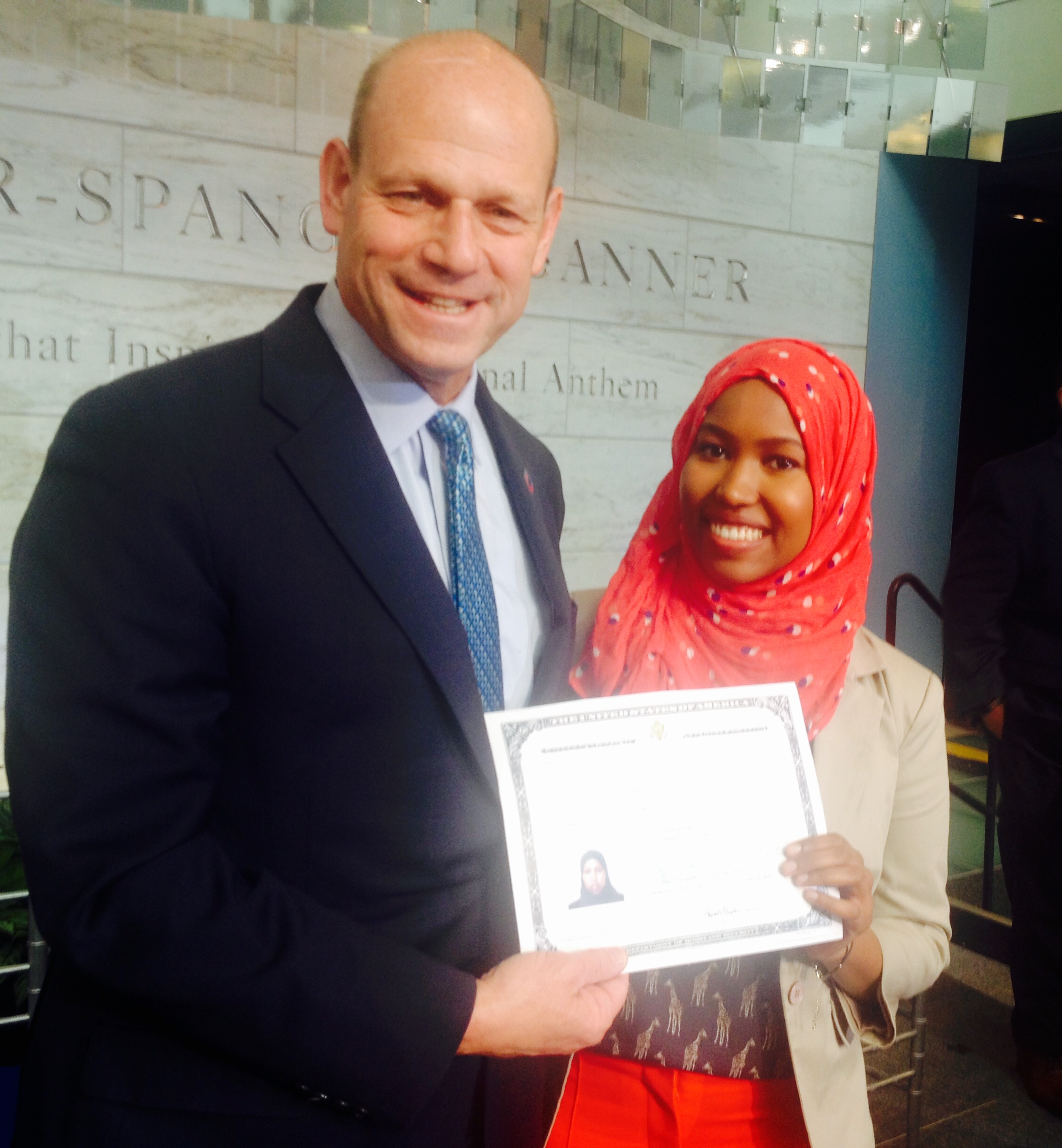 Director Rodriguez and me at naturalization ceremony at the Smithsonian, holding a copy of my own Certificate of Naturalization that was issued on April 29, 2013 (June 11, 2015)

Now, I felt like a true American. And today, as we celebrate Immigrant Heritage Month, I reflect upon the mosaic nature of my own immigrant roots: the melting pot that is my American identity contains equal parts Somali, Danish, and Memphian.

A year later, I would take a different kind of oath. On July 28, 2014, I was sworn in as special assistant to the Director of U.S. Citizenship and Immigration Services (USCIS). USCIS naturalizes more than 700,000 new U.S. citizens each year, along with processing millions of other immigration-related requests. USCIS is the very agency that made it possible for my family to immigrate, and for all of us to become citizens. 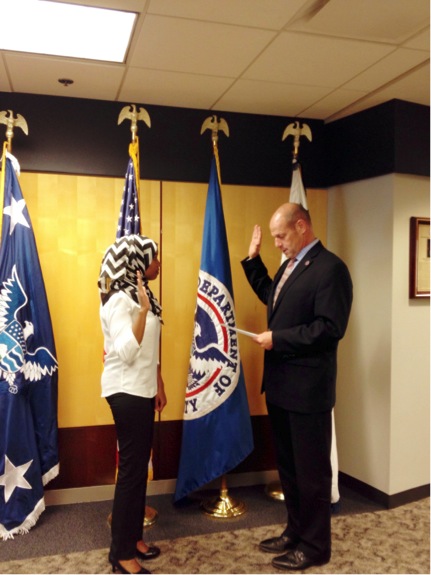 My ceremonial swearing-in with Director Rodriguez on my first day as special assistant to the Director (July 28, 2014)

In my position, I coordinated special naturalization ceremonies. These commemorate national holidays or other special events and feature prominent speakers, guests, and locations.

Today, I am honored to serve on a White House team advancing the President’s efforts to fix our broken immigration system. I want to show my appreciation to this country, and I can’t think of a better way to do it than by being there for others who want to earn the privilege to celebrate their Day One. 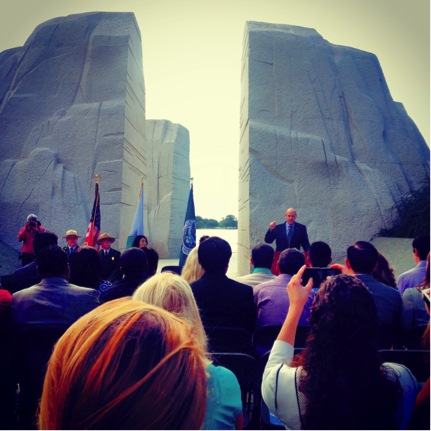 The first special naturalization ceremony I helped coordinate at USCIS. This ceremony was in honor of the 51st anniversary of Martin Luther King's "I have a Dream" speech (August 28, 2014)