On Trade, Here’s What the President Signed into Law:

June 29, 2015 at 3:55 PM ET by Greg Nelson
Twitter Facebook Email
Summary:
Here’s a quick look at the rules the President signed today and how they will help ensure American workers can benefit from the most progressive trade deal in history.

That’s a good thing, because as President Obama has said, past trade deals haven’t always lived up to the hype. Now, thanks to the new rules of the road laid out by Congress, our latest trade deal — the Trans-Pacific Partnership (TPP) — can put in place high, enforceable standards that reflect our values on the environment, on workers’ rights, on transparency, and more.

Here’s a quick look at the rules the President signed today and how they will help ensure American workers can benefit from the most progressive trade deal in history. 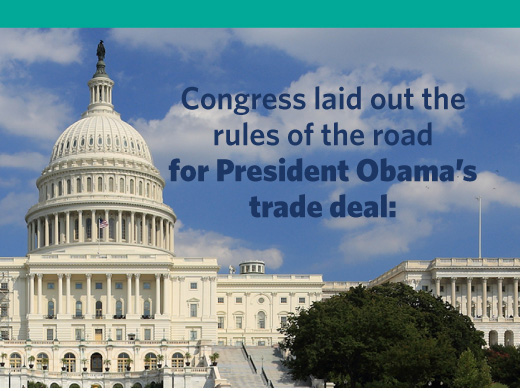 Traditionally, trade promotion authority, or TPA, lays out a blueprint for the kind of trade deal the President can negotiate and secure with other countries. Trade negotiating authority has been granted to all but one of our 13 presidents since President Franklin Roosevelt.

The authority Congress is granting to President Obama today is an upgrade — not only does it give him the leverage he needs to close out negotiations on the TPP with 11 countries in the fast-growing Asia-Pacific region, but it ensures that the TPP will include the strongest protections in history for our workers and our environment.

Thanks to TPA, here’s what you’ll find in TPP: 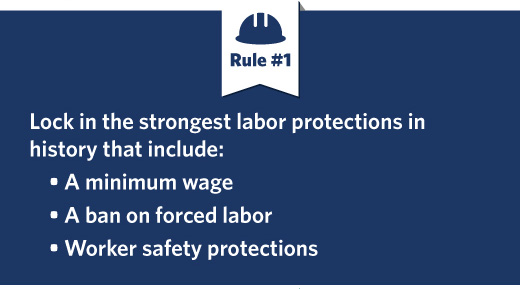 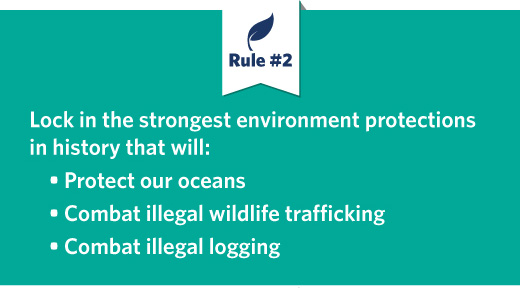 The program was set to expire on September 30, 2015, but thanks to the bill President Obama is signing, we will not only extend TAA, but restore key provisions that will help support tens of thousands more workers each year by:

The African Growth and Opportunity Act 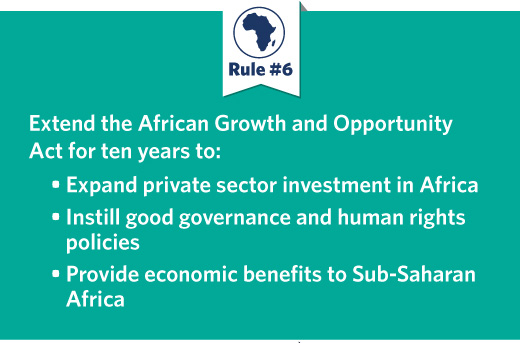 For 15 years, the African Growth and Opportunity Act (AGOA) has provided tangible economic benefits and opportunities to sub-Saharan Africa by helping African companies improve their competitiveness and invest in building a strong private sector. Also set to expire in September, today’s bill extends AGOA for 10 years and reflects our shared values by providing incentives to adopt good governance and pro-growth/pro-development policies, including on workers’ rights and human rights. The bill also gives the Administration the ability to withdraw, suspend, or limit benefits if designated AGOA countries do not comply with our eligibility criteria.

Haiti is the poorest country on the Western Hemisphere. The Haitian Hemispheric Opportunity Through Partnership Encouragement Act (HOPE II) ensures that Haiti’s apparel industry receives support by increasing access to consumers. In 2013, total export revenues from the textile and garment industry accounted for 91 percent of Haiti’s national export earnings and 10 percent of national GDP. The apparel industry is also among the largest employers within Haiti, creating jobs for nearly 30,000 people, and 65 percent of these workers are women. What the President is signing today extends duty-free benefits on apparel exports from Haiti until September 30, 2025. The HOPE II program has had a clear and direct role in supporting the creation of thousands of jobs in the textile and garment sectors, while providing important protections to workers.

Though it has a wonky name, the Generalized Systems of Preferences program (GSP) is the oldest trade preferences program in U.S. history. Instituted in 1974, GSP is designed to promote economic growth in the developing world by providing preferential duty-free entry into the U.S. market for nearly 5,000 products form 122 designated beneficiary countries and territories. In 2012, the year before the program expired, the U.S. imported $20 billion worth of products, helping developing countries to increase and diversify their trade with the U.S. and grow their economies. U.S. businesses have also paid a high price after this program expired, over $1 billion in fact, on tariffs that previously entered the U.S. duty-free. Its renewal today will help some of the poorest countries in the world, U.S. businesses, and consumers alike.

The Level the Playing Field Act

American manufacturers, especially those competing against Chinese imports, and American workers need a level playing field to compete and win in the 21st century global economy. The Level the Playing Field Act will help protect our industry by closing loopholes and strengthening the Administration’s ability to respond to foreign companies that try to undercut our domestic production. It will also enhance tools we use to assess and help prevent injury to American companies that are hurt by unfair trading practices.

Learn more about the Level the Playing Field Act here.

Want to dig deeper into the President’s trade deal? Find out more about what’s in the deal and who it’ll help here: obamawhitehouse.archives.gov/trade