Chart of the Week: What Is the Export-Import Bank and Why Should You Care?

June 30, 2015 at 5:12 PM ET by Tanya Somanader
Twitter Facebook Email
Summary:
Check out this chart to see why American businesses and workers depend on the Export-Import Bank to compete in the global economy.

Tonight at midnight, America’s Export-Import Bank will shut its doors because, after 81 years, Congress has failed to reauthorize it for the first time in history.

So what is the Export-Import Bank?

It’s an independent federal agency with one simple mission: support American jobs by helping businesses sell their products abroad. The majority of these companies are small businesses – the engine of our economy – and helping them go global plays a critical role in strengthening our country’s economy.

That’s why nearly 60 countries, including China, make significant investments in their own Export-Import Banks. These competitors are fighting for sales and the export-backed jobs that come along with it – and starting tomorrow when our bank has expired, American businesses will be less competitive to keep those jobs at home. When our Export-Import Bank lapses, China and our other rivals will pick up the slack, putting American businesses and American workers at a disadvantage. In fact, a senior official from one of China’s versions of the Export-Import Bank recently said that the expiration of our bank is a “good thing” for China.

Take a look to see just how far behind China we are when it comes to support for our Export-Import Bank: 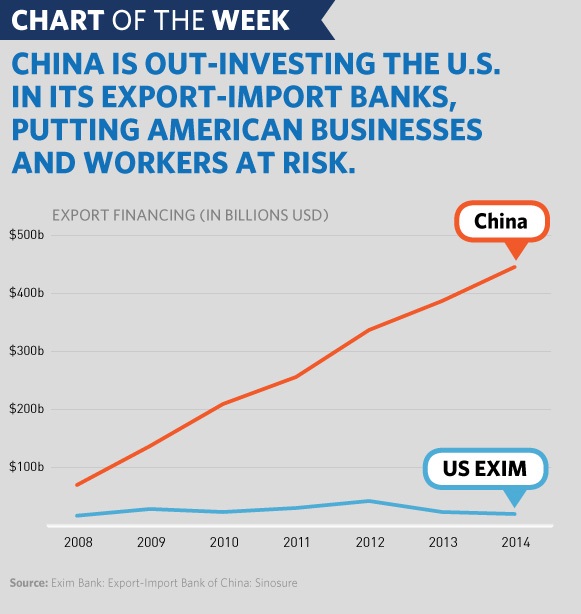 In fact, while the majority of countries maintained the same level of funding for their Export-Import Banks last year, China’s grew by more than 40 percent. According to recent estimates, China supported roughly $58 billion in export credits last year – exceeding medium- and long-term support from all the G-7 countries combined.

American small business owners and workers need the Export-Import Bank to help level the playing field against countries like China. When our entrepreneurs go into global markets armed with the stability provided by Export-Import support, they can compete on their merits. And when our businesses are on a level playing field, we win.

Need proof? The Financial Times shares just one example of why you should care about the Export-Import Bank and the people it helps:

"The WS Darley company and its fire engines have a history of taking on giants. Founded in 1908, the company began life as a catalogue business catering to municipalities. But by the 1920s, after a conversation with Henry Ford, founder William Darley had turned to manufacturing a $690 kit that allowed towns around the US to convert Model Ts into affordable fire trucks. The move so annoyed Darley’s bigger competitors that they refused to sell him water pumps. He responded by making his own.

Today the Chicago-based company caters to fire services around the world and is run by the founder’s grandchildren. It employs 220 people, brings in $150m in revenues each year and does half of its business overseas, selling firefighting equipment to local governments in competition with manufacturers from China, Europe and beyond.

But what is already an intense fight is about to get a lot harder.

With the expiry at midnight on Tuesday of the authority of the US Export-Import Bank to make new loans — the result of opposition to its very existence among conservative Republicans in Congress — WS Darley, like many other US companies, is facing a new challenge: how to compete without the sort of low-cost export financing, guarantees and insurance that Chinese competitors and other rivals can offer."