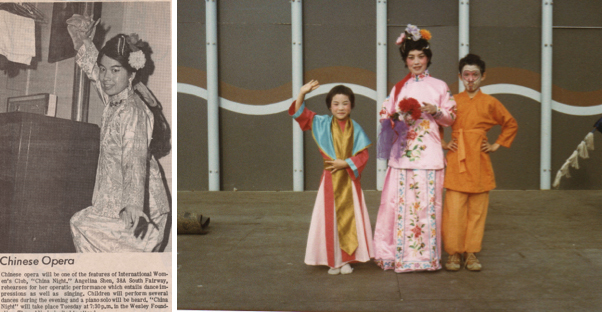 (Left) Albert’s mother was featured in a newspaper clipping about Chinese opera in the early 1970’s. (Right) Albert, his younger sister, and his mother pose for a photo wearing traditional Chinese opera costumes in the mid-1970s.

Both of my parents moved to Taiwan from China during their childhoods and came to the U.S. after finishing college. They first met in New York City while enjoying their favorite hobby, Chinese opera. Opera brought them together and it eventually became a hobby and pastime that my entire family shared. I learned percussion for the Chinese opera, and we traveled as a family performing all over Washington State and Canada. Those were some of my fondest memories from childhood – it was a wonderful bridge between our family’s history in China and the new life we were making in the U.S.

I was born in Connecticut, and soon after my parents and I moved to Pullman, WA, so my father could pursue his PhD in immunology. My sister was born in Pullman, where we worked in our mom’s small gift shop and later in her Chinese restaurant downtown. The restaurant became a place where our family spent a great deal of time. My father loves to cook too so I learned many of Chinese culinary traditions from him, which is why I now enjoy cooking Chinese meals. 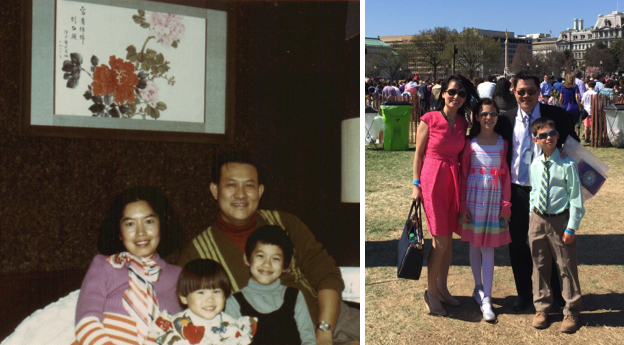 (Left) Albert (bottom-right) with his parents and sister at their home in the mid-1970s. (Right) Albert poses with his wife and their children at the White House Easter Roll in April 2015.

My father’s career working for the U.S. Department of Agriculture and my mother’s entrepreneurship taught us many lessons in how to pursue the American dream. Although my sister and I were interpreters in our home, my mother was fearless and studied English faithfully on her own; she never let a language barrier keep her from pursuing her goals. She worked hard to supplement my father’s salary so my sister and I could go to college. Higher education was not just an option but an expectation in our family, because my parents believed it would help my sister and me establish fulfilling careers and better lives.

After graduating from the University of Washington with degrees in Chemistry and Environmental Science, I eventually started my own small civil engineering firm. As my business grew, I experienced firsthand the inequities of running a minority-owned firm. I learned that it was not enough for me to be personally successful, but that the community should be prospering as well. My parents had raised me with values that dictated my involvement in the community. It was time for me to give back, so I served on several non-profit boards in the Asian American community.

During the 2008 recession, I became very active with policy advocacy for minority businesses at the local, state, and federal level. I also found a voice and passion in the education community and, while serving on the Seattle Community College Board of Trustees, met Chris Lu, President Obama’s then-Special Assistant and Cabinet Secretary. Mr. Lu encouraged me to work for the Obama Administration. His inspiration and guidance underscores the value of relationships and traditions within immigrant communities: we cannot pursue our American dreams alone and we need each other’s support to help our communities prosper.

As the National Deputy Director of the Minority Business Development Agency (MBDA), I develop sustainable policies that will enable the MBDA to promote the growth and global competitiveness of businesses owned and operated by minority entrepreneurs. Today, we can no longer ignore the reality of economic disparity that desperately needs a solution. I believe that solution is found in future generations of social entrepreneurs. It is my hope that these future business owners will use their innovative talents to break down institutional barriers so that more of our business enterprises can be the wealth creators of tomorrow.

Albert K. Shen is the National Deputy Director of the Minority Business Development Agency (MBDA) at the U.S. Department of Commerce. Prior to his appointment with MBDA, Albert was a small business owner and respected community advocate whose leadership has made a big impact on some of the Northwest’s largest and most critical infrastructure and environmental clean-up projects. He lends his expertise to lead educational institutions, non-profit community organizations, civic committees, business organizations and political advocacy groups and is a continuous advocate for all minority businesses. At the MBDA he is leading the agency on legislative and intergovernmental policy priorities on international trade, government contracting and access to capital initiatives.